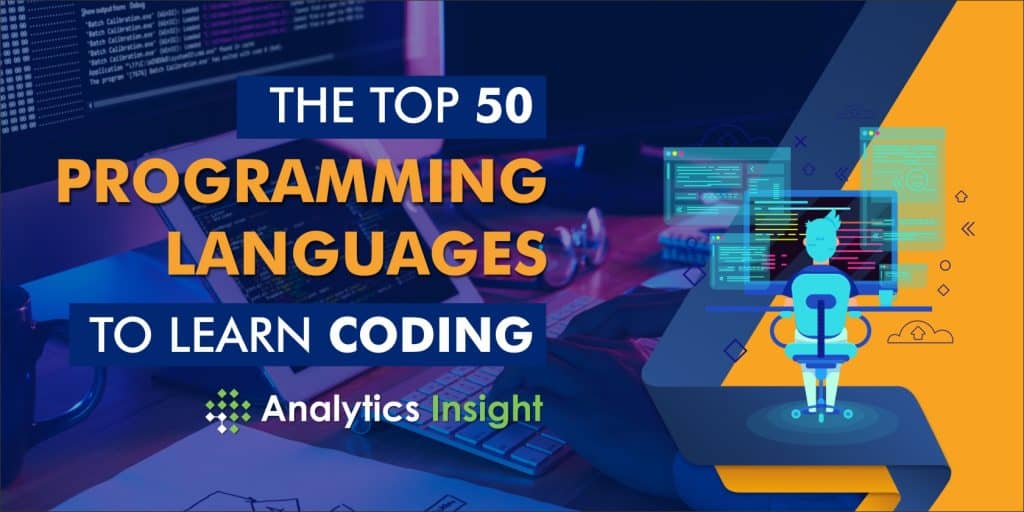 Which language best suites you? Explore the list of 50 programming languages.

Gone are the days when a handful of people were considered as top computer programmers and developers. The dawn of the digital age has now made it possible to everyone to play with codes and write a computer program. What all this need is to have a solid grasp of emerging technology and programming languages. However, it is not as easy as it seems since there are a large number of programming languages out there and choosing one and master in it might be challenging. Thus, before getting started into the world of coding, you must make the right choice and come up with the one that best suited for you.

Here is the list of top 50 programming languages to learn in 2020.

JavaScript is a core programming language for powering the World Wide Web. Its effectiveness in front- and back-end development, the ability to work well with other languages, versatility, and updated annually make it a widely used language.

C is designed specifically for use with the Windows OS and is part of the .Net framework. It is widely used by competitive programmers owing to the fact that it is extremely fast and stable.

Java is one of the languages that is popular in large organizations thanks to it a number of use-cases and has long been the preferred go-to language for coding on Android. It is widely used in Android App Development.

Also known as Golang, Go provides excellent support for multithreading and thus, it is being used by a majority of companies that rely heavily on distributed systems. Developed at Google, Go scales well to larger systems and can execute multiple processes at once.

Perl takes the best features from other languages, such as C, awk, sed, sh, and BASIC, among others. It is originally developed for text manipulation and now used for a wide range of tasks such as system administration, web development, network programming, GUI development, and more.

Ruby is a scripting language that runs on a variety of platforms, such as Windows, Mac OS, and the various versions of UNIX. Everything in Ruby is an object except the blocks but there are replacements too for it i.e procs and lambda.

Swift can be friendly to new programmers. It is a safe, fast, and interactive programming language that integrates the best in modern language expertise with wisdom from the wider Apple engineering culture and the diverse contributions from its open-source community.

PHP programming language is basically used for developing web-based software applications and allows web developers to create dynamic content that interacts with databases. It is a must learning language for students and working professionals to become a Software Engineer especially when they are working in Web Development Domain.

C++ is a general-purpose programming language that can be used to develop operating systems, browsers, games, and more. It supports different ways of programming like procedural, object-oriented, functional, and so on. This makes C++ powerful as well as flexible.

R is one of the most popular languages commonly used in statistical computing, data analytics and scientific research. It is used by statisticians, data analysts, researchers and marketers to retrieve, clean, assess, visualize and present data. Owing to its expressive syntax and easy-to-use interface, R has grown in popularity in recent years.

SQL is a standard language for storing, manipulating and retrieving data in databases. All the Relational Database Management Systems (RDMS) like MySQL, MS Access, Oracle, Sybase, Informix, Postgres and SQL Server use SQL as their standard database language.

Arduino programming language is based upon the Wiring development platform, which in turn is based upon Processing. It is basically a framework built on top of C++. There are various models of Arduino boards, as well as a whole variety of Arduino-compatible clone products, such as GSTduino, Freaduino, or CraftDuino. Their basic structure is rather similar.

MATLAB is used widely in the Computer Vision and Image processing industry. It started out as a matrix programming language where linear algebra programming was simple. MATLAB is Ideal for developing scientific research applications. Matlab Coder allows converting code for use in other programming languages, such as C++, Java, and Python.

TypeScript is an open-source language that builds on JavaScript by adding static type definitions. Types provide a way to define the shape of an object, providing better documentation, and allowing TypeScript to validate that a user’s code is working correctly.

Kotlin is designed to be completely interoperable with Java. This language offers features that developers ask for since the time Android announced it as its first language. Kotlin effortlessly combines object-oriented and functional programming features within it.

Groovy is a powerful, optionally typed and dynamic language, with static-typing and static compilation capabilities, for the Java platform aimed at improving developer productivity. It uses a curly-bracket syntax similar to Java’s and supports closures, multiline strings, and expressions embedded in strings.

Dart is a client-optimized language for apps on multiple platforms. It is developed by Google and can be compiled to the ARM and x86 architectures for mobile use or transpiled to JavaScript for browser applications.

Assembly language can be converted into executable machine code by a utility program referred to as an assembler like NASM, MASM, etc. This programming language is designed for a computer or other programmable device specific to particular computer architecture.

PowerShell provides full access to COM and WMI, enabling administrators to perform administrative tasks on both local and remote Windows systems as well as WS-Management and CIM enabling management of remote Linux systems and network devices. It has a rich expression parser and a fully developed scripting language.

A general-purpose language and can be used to write any application, Julia is a high-level, high-performance, dynamic programming language. Many of its features are well-suited for numerical analysis and computational science.

Scratch is used to create interactive stories, games, and animations. While the Scratch language is fairly easy to use, fun, and addictive, the language is popular for two main reasons, its community and how Scratch encourages kids to learn then take risks to adapt what they’ve done.

COBOL is used for writing application programs like those in the defense domain, insurance, etc., which require huge data processing. Massive COBOL codebases are still in use around the world, many of them running almost exactly as they were when first created.

Fortran comprises of a lineage of versions, each of which evolved to add extensions to the language while usually retaining compatibility with prior versions. It is extensively used in numerical, scientific computing, and has a strong user base with scientific programmers. The language is also used in organizations such as weather forecasters, financial trading, and in engineering simulations.

Stands for Advanced Business Application Programming, ABAP is a high-level programming language created by the German software company SAP SE. It is extracted from the base computing languages Java, C, C++ and Python, and is currently positioned, alongside Java.

Scheme language supports operations on structured data such as strings, lists, and vectors, as well as operations on more traditional data such as numbers and characters. It has been employed to write text editors, optimizing compilers, operating systems, graphics packages, expert systems, numerical applications, financial analysis packages, virtual reality systems, and practically every other type of application imaginable.

A shell program, sometimes referred to as a shell script, is simply a program constructed of shell commands. Designed to be run by the Unix shell, a command-line interpreter, the language may be simple and encompass just a few shell commands, or it may be very complex and comprises thousands of shell commands.

VBScript is the primary scripting language for Quick Test Professional (QTP), which is a test automation tool. It uses the Component Object Model to access elements of the environment within which it is running. For example, the FileSystemObject (FSO) is used to create, read, update and delete files.

As logicians create models to describe and define human reasoning, for example, problems in mathematics, computer science, and philosophy, Haskell’s main work was in combinatory logic, a notation designed to eliminate the need for variables in mathematical logic. It is typically used in academia and industry.

The Hack programming language has been released for HHVM (HipHop Virtual Machine), created by Facebook as a dialect of PHP. Hack reconciles the fast development cycle of PHP with the discipline provided by static typing, while adding many features commonly found in other modern programming languages.

Pascal was developed for teaching programming as a systematic discipline and to develop reliable and efficient programs. It is an Algol-based language and involves many constructs of Algol. Pascal offers several data types and programming structures. It is easy to understand and maintain Pascal programs.

Ada improves code safety and maintainability by using the compiler to find errors in favor of runtime errors. It was designed to be a single language, capable of running on all of those embedded systems, which offered the same or better level of performance and reliability.

Lua is used for all sorts of applications, from games to web applications and image processing. To run Lua programs on the computer, users will need a standalone Lua interpreter and perhaps some additional Lua libraries.

Lisp is the second-oldest high-level programming language in widespread use today. It was originally created as a practical mathematical notation for computer programs, influenced by the notation of Alonzo Church’s lambda calculus.

Developed by the Free Software Foundation (FSF) under the GNU Project, Bash is a Unix shell and command language. It is the default user shell on most Linux installations. Bash can read and execute commands from a file, called a shell script.

Clojure is a modern, dynamic, and functional dialect of the Lisp programming language on the Java platform. Like other Lisp dialects, Clojure treats code as data and has a Lisp macro system. It advocates immutability and immutable data structures and encourages programmers to be explicit about managing identity and its states.

Based on the concepts of the popular C++, MQL4, or MetaQuotes Language 4, allows users to develop complex programs with a large amount of calculations while accurately manage almost all trading robot and indicator parameters.

Apex is an integrated, easy to use, data-focused, rigorous, hosted, multi-tenant aware, automatically up-gradable, easy to test and versioned programming language. It allows developers to attach business logic to the record save process and has built-in support for unit test creation and execution.

LabVIEW, which stands for Laboratory Virtual Instrument Engineering Workbench, is a system-design platform and development environment for a visual programming language from National Instruments. The programming paradigm used in LabVIEW, sometimes called G, is based on data availability.

D is well suited to writing medium to large scale million line programs with teams of developers. This programming language is easy to learn, provides many capabilities to aid the programmer, and is well suited to aggressive compiler optimization technology.

SAS is a computer programming language used for statistical analysis. Through innovative analytics, it caters to business intelligence and data management software and services. SAS transforms data into insight which can give a fresh perspective on business.

An educational programming language, Logo is widely known for its use of turtle graphics, in which commands for movement and drawing produced line or vector graphics, either on-screen or with a small robot termed a turtle.