Top 10 Fastest Supercomputers in the World to Watch in 2020 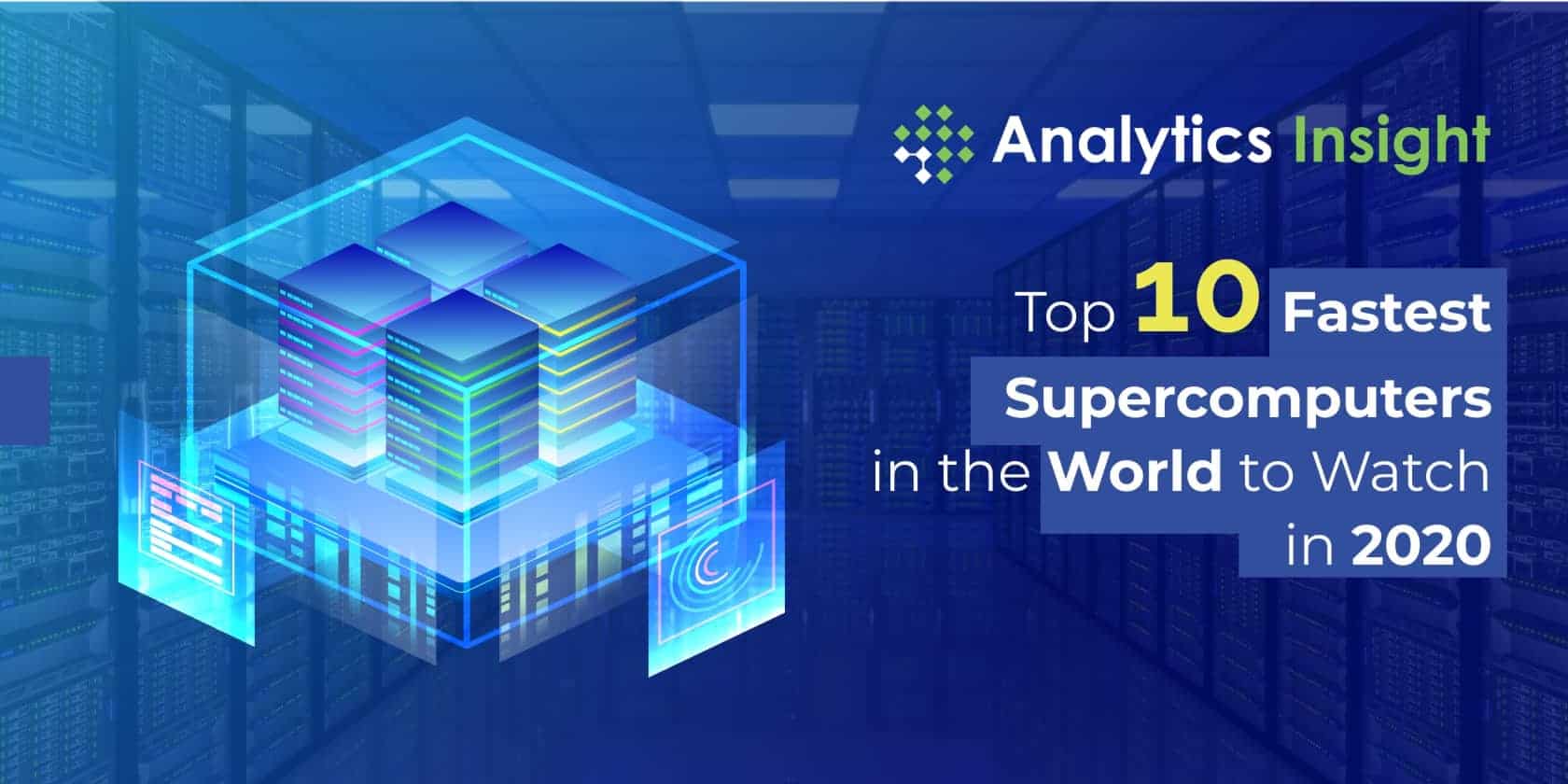 With decline in supercomputing costs, supercomputers are gaining rapid traction.

The demand for high-performing computing systems in market research, scientific and engineering work and other business associated models continues to surge today. This is where a supercomputer comes in, performing at or near its current highest operational rate. The performance of supercomputers is typically measured in floating-point operations per second (FLOPS), in place of million instructions per second (MIPS). Such computers are composed of thousands of processors working in parallel and respond to increasing needs to process zillions of data in real-time with quality and accuracy.

Analytics Insight compiles a list of the top 10 fastest supercomputers in the world known for their supercomputing capabilities.

Fugaku was jointly developed by RIKEN and Fujitsu. Named after an alternative name for Mount Fuji, the supercomputer built with the Fujitsu A64FX microprocessor. This CPU is based on the ARM version 8.2A processor architecture and adopts the Scalable Vector Extensions for supercomputers. Installed at RIKEN Center for Computational Science (R-CCS) in Kobe, Japan, Fugaku is designed for applications that will address high-priority social and scientific issues. Its core features include low power consumption, high computational performance, user convenience, and ability to produce ground-breaking results; power consumption of 30 to 40 MW, and its design suited for AI applications such as deep learning.

Sierra, one of the world’s fastest supercomputers, which is developed for the Lawrence Livermore National Laboratory for use by the National Nuclear Security Administration (NNSA) as the second Advanced Technology System. The system provides computational resources that are vital for nuclear weapon scientists to fulfill the NNSA’s stockpile stewardship mission through simulation instead of underground testing. The IBM-built Sierra supercomputer provides over six times the sustained throughput performance and more than five times the sustained scalable science performance of Sequoia, with a 125 petaFLOP/s peak. This supercomputer, which combines IBM’s Power 9 processors and NVIDIA’s Volta graphics processing units, is over five times more power-efficient than Sequoia, with a peak power consumption of approximately 11 MW.

Sunway TaihuLight, a Chinese supercomputer, which is ranked third in the TOP500 list, as of November 2018, with a LINPACK benchmark rating of 93 petaflops. The supercomputer uses a total of 40,960 Chinese-designed SW26010 manycore 64-bit RISC processors based on the Sunway architecture. Each processor chip carries 256 processing cores and an additional four auxiliary cores for system management (also RISC cores, just more fully-featured) for a total of 10,649,600 CPU cores across the entire system. The computer, which runs the Linux-based Sunway Raise OS 2.0.5, uses the SW26010 processor, a chip designed by Shanghai High-Performance IC Design Center.

HPC5, also called High-Performance Computing – layer 5, is a set of parallel computing units with a peak processing power of 51.7 petaFlops. Combined with the supercomputing system in operation since 2018 (HPC4), the peak computational capacity of the infrastructure totals 70 petaFlops: that is, 70 million billion mathematical operations performed in a single second. Located inside Eni’s Green Data Center has a peak power of over 50 petaflops, HPC5 is the most powerful industrial supercomputer in the world. This supercomputer consists of 1820 Dell EMC PowerEdge C4140 nodes, each with 2 Intel Gold 6252 24-core CPUs and 4 NVIDIA V100 GPU accelerators.

Tianhe-2, a supercomputer developed by the China’s National University of Defense Technology, which processes at a great 33.9 petaflops, nearly twice the performance of the Titan or Sequoia, and over 10 times the performance of Tianhe-1A. The system runs on a mix of Intel Xeon E5 processors, custom processors and Intel Xeon Phi coprocessors, nearly 3,120,000 cores in total. Located at the National Super Computer Center in Guangzhou, Tianhe-2 will be used for education and research. Moreover, it runs on a custom version of the Ubuntu Linux operating system called Kylin, which was built through a partnership between the NUDT, the China Software and Integrated Circuit Promotions Centre (CSIP) and Canonical (creators of Ubuntu).

Marconi100 supercomputer was developed by IBM using IBM POWER9 technology and NVIDIA V100 Tensor Core GPUs as the world’s smartest AI supercomputer, the US Department of Energy’s Summit system, and according to measurements conducted by CINECA. This offers nearly 32 theoretical peak petaFLOPS of computing power, or up to 32 quadrillion calculations per second. Marconi100 will support European researchers, through the PRACE initiative, and Italian researchers through the Italian Supercomputing Resource Allocation initiative (ISCRA). This will equip them with additional computing resources to face socio-economic challenges such as climate change, renewable energy, sustainable economics, and precision medicine.

Summit, a supercomputer developed by IBM for use at Oak Ridge National Laboratory, is capable of 200 petaFLOPS, making it the fastest supercomputer in the world. Its current LINPACK benchmark is clocked at 148.6 petaFLOPS. Summit provides scientists with incredible computing power to solve challenges in energy, AI, human health, and other research areas, that were impossible until now. Undeniably, these discoveries will help shape the human understanding of the universe, bolster US economic competitiveness, and contribute to a better future.

Piz Daint, a supercomputer in the Swiss National Supercomputing Centre, has a computing power of 7.8 petaFlops, this means 7.8 quadrillions of mathematical operations per second. This supercomputer has the potential to compute in one day over a modern laptop that could compute in 900 years. Piz Daint is a 28 cabinet Cray XC30 system with a total of 5’272 compute nodes. The compute nodes are equipped with an 8-core 64-bit Intel SandyBridge CPU (Intel® Xeon® E5-2670), an NVIDIA® Tesla® K20X with 6 GB GDDR5 memory, and 32 GB of host memory. The nodes are connected by the “Aries” proprietary interconnect from Cray, with a dragonfly network topology.

The Trinity supercomputer is aimed at providing an increased computational capability for the NNSA Nuclear Security Enterprise in support of ever-demanding workloads. Managed and operated by Los Alamos National Laboratory and Sandia National Laboratories under the Alliance for Computing at Extreme Scale (ACES) partnership, this supercomputer’s capabilities are required for supporting the NNSA Stockpile Stewardship program’s certification and assessments to ensure that the nation’s nuclear stockpile is safe, reliable, and secure. Trinity was built in 2 stages – the first stage incorporated the Intel Xeon Haswell processor and the second stage added a significant performance increase using the Intel Xeon Phi Knights Landing Processor.

Frontera is the fastest academic supercomputer located at the University of Texas at Austin. The supercomputer is the joint development of Dell EMC and Intel, funded by a US$60 million grant from the National Science Foundation that would replace Stampede2 at the University’s Texas Advanced Computing Center (TACC). Deployed in June 2019, Frontera is the 8th most powerful supercomputer in the world and the fastest supercomputer on a university campus. It has two computing subsystems, the primary computing system focused on double-precision performance and the second subsystem focused on single-precision streaming-memory computing. Additionally, Frontera has multiple storage systems, along with interfaces to the cloud and archive systems, and a set of application nodes for hosting virtual servers.

How Big Data Is Important For Compliance