NASA Unveils a Cluster of Mars Craters Discovered by AI 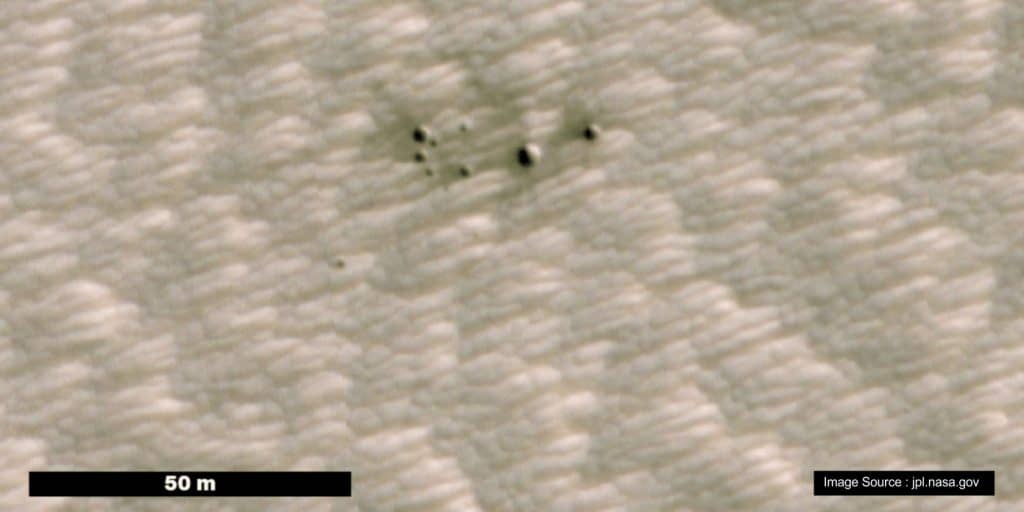 A team of planetary scientists and AI researchers at NASA’s Jet Propulsion Laboratory in Southern California tapped artificial intelligence to identify fresh craters on Mars. The High-Resolution Imaging Science Experiment (HiRISE) camera aboard NASA’s Mars Reconnaissance Orbiter (MRO) spotted the craters. AI technology first discovered the craters in images taken the orbiter’s Context Camera, then scientists followed up with the HiRISE image to confirm the craters. The accomplishment offers hope for both saving times and accelerating the volume of findings, as noted by NASA’s Jet Propulsion Laboratory.

According to the laboratory, scientists typically spend hours each day studying images captured by NASA’s MRO, looking for changing surface phenomena like dust devils, avalanches, and shifting dunes. In the orbiter’s 14 years at Mars, scientists have relied on MRO data to find over 1,000 new craters. The craters found were created by several pieces of a single meteor. The largest crater was about 13 feet (4 meters) wide. Cumulatively, the craters span about 100 feet (30 meters) of the Red Planet’s surface and were found in a region called Noctis Fossae.

Scientists normally search for these craters by scanning images captured by the NASA MRO’s Context Camera, which takes low-resolution images covering hundreds of miles at a time. However, the process is time-intensive, as well as takes researchers around 40 minutes to scan one Context Camera image. To stimulate this process, the JPL research team designed a tool called “automated fresh impact crater classifier”, as part of a broader JPL effort named COSMIC (Capturing Onboard Summarization to Monitor Image Change) that creates technologies for future generations of Mars orbiters.

To train this classifier tool, researchers fed it 6,830 Context Camera images, containing the range of locations those were previously discovered impacts that already had been confirmed by HiRISE. After that, researchers applied the crater classifier tool on the Context Camera’s entire repository of about 112,000 images. This significantly cut scientists’ 40 minutes they typically take to check the image down to an average of just five seconds. Despite a robust computing power, the classifier still requires a human to check its work.

“AI can’t do the kind of skilled analysis a scientist can,” said JPL computer scientist Kiri Wagstaff. “But with tools like this, new algorithms can be their assistants. This paves the way for an exciting symbiosis of human and AI ‘investigators’ working together to accelerate scientific discovery.”

Two months back in August, JPL claimed that the HiRISE camera confirmed a dark smudge detected by the classifier in Noctis Fossae was in fact the cluster of craters. Already, the team has submitted over 20 additional candidates for HiRISE to check out.

While this crater classifier currently runs on Earth-bound computers, the ultimate goal is to build similar classifiers tailored for onboard use by future Mars orbiters.

The AI technology used to discover these craters was developed by NASA’s Jet Propulsion Laboratory, a division of Caltech, manages the MRO for NASA’s Science Mission Directorate, Washington.

A Layered Approach is Must for Cybersecurity

Explore Different Salary Ranges for the Hottest Careers in India 2020

Robots on the Farm