Transformation of Healthcare: How Technology Redefines One of the Oldest Industries in the World 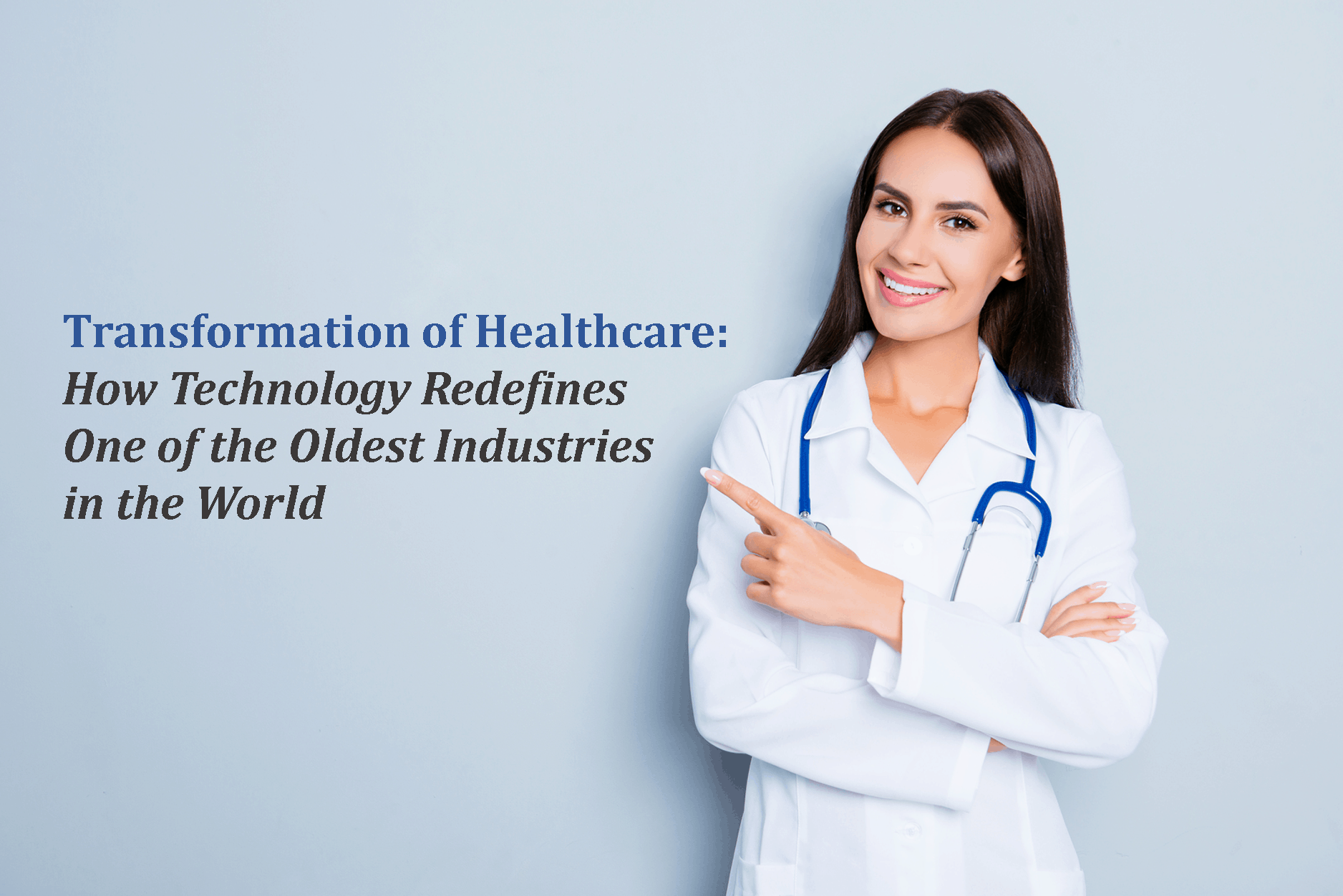 Since healthcare is one of the few industries that are crucial for all people worldwide, no wonder it sees huge spending and even bigger investment. As Deloitte estimated, in 2020 the global annual healthcare spending may reach $8.7 trillion. And in the first half of 2018, $10.6 billion were poured into the healthcare startups by venture capitalists, as per Forbes.

These numbers are clear indicators that health care today is a whole field of opportunities for both savvy startups and huge enterprises that are willing to deploy cutting-edge technology for healthcare purposes. However, the implementation of technology within the medical sector started a long time ago, back in the early 1960ies. Since then, healthcare went through a massive transformation, both in terms of adopted practices and equipment. And this is not the end of its development – today the healthcare industry stands on the verge of change once again due to massive deployment of artificial intelligence, RPA, and other technologies.

The pain points of the past and first implementation of technology

One of the biggest pain points for all the industries at all times have been:

•  The overwhelming amount of paperwork

•  Mundane and routine tasks that consumed too much time

One of the pioneers in the field of medicine digitization was Homer Warner – an American cardiologist who was among the first ones to use computers for decision support in the mid-1950s. In the late 1960s, Warner and his colleagues came up with the monitoring systems that became a globally used standard today and were a true breakthrough back then.

In 1980s, the networking technologies for computer connection gained incredible popularity. And in 1991, the EMRs (electronic medical records) were examined and adopted as well.

Since then, the healthcare industry has been steadily transforming towards more efficient and accurate processes. The implementation of computers and other technologies freed medical specialists from hours, spent on routine work, and allowed them to focus on tasks that are more critical. As well, computers significantly decreased the possibility of an error and allowed to keep all processes within one place (or network).

Within the last few years, the world saw the rise of IoT, AI, and Big Data. Without a doubt, these technologies influenced healthcare significantly and took it to the next level.

Modern healthcare is heavily influenced by the following technologies: the Internet of Things, Artificial Intelligence, Machine Learning, and Big Data. Each of them offers unique solutions that eliminate risks, decrease the possibility of an error, increase the efficiency of work processes and contribute to medical research.

As can be guessed from the name, data science is all about analyzing the data and extracting valuable insights from it. And, since healthcare involves a lot of work with data, data science contributes greatly to the industry development.

In healthcare, image processing plays a vital role in diagnostics. The earlier the disease is found, the higher the chances are that it will be successfully cured. The examples of such image techniques include X-ray, MRI, computed topography.

What data science does is that it offers medical specialists an opportunity for more accurate and thorough analysis. Being able to classify the organ texture, find non-obvious disease indicators etc., data science contributes greatly to the detection of severe conditions, like tumor or artery stenosis.

According to Drugs.com, it may take about 12 years for a drug to get submitted – and think of all the resources and finances invested into the development. But thanks to data science, the time and investment can be reduced significantly.

With the help of special algorithms, data science makes it possible to forecast how the drug will act and what will be the expected success rate. Such an approach eliminates the necessity to conduct lab experiments by enabling the tests in carefully crafted simulations.

This technology offers accurate analysis and inspection and found its niche in the sphere of image analysis.

We’ve discussed above that data science contributes greatly to image processing. Due to its ability of detecting the slightest anomalies, computer vision is also used for patient’s scan analysis and increases the accuracy of the image analysis.

This, however, is not the only application of the computer vision in the healthcare. A Gauss Surgical company, for example, developed a software that is able to detect the patient’s blood loss in real time – all thanks to the computer vision. This proves that if a company has an innovative idea and uses the corresponding technology, it can make an impact on the future of healthcare.

A subset of AI, machine learning, is capable of learning and recognizing certain patterns in the data and building predictive models upon that. This technology is widely deployed in the financial industry but in healthcare it plays a crucial role as well, helping medical specialists predict and identify the possible disease and prevent its development.

The deployment of machine learning in healthcare plays an important role indeed as many illnesses always go unnoticed during the first stage and it may become too late in the future. But with the accurate predictive models, doctors will have a bigger chance to fight cancer, for example, rather than treating the already progressing illness.

We cannot state that there will be other groundbreaking technologies in healthcare in 2019-2020, but the ones that are used now will continue to develop. They include more advanced chatbots, wider deployment of predictive analytics, etc. However, certain things will change – find below what innovations are about to be launched in the nearest future.

The Internet of Medical Things

The Internet of Things is slowly turning into the IoMT – the Internet of Medical Things. This term implies a wide adaptation of smart and medical wearables, including ECG monitors. It is expected that the number of deployed IoMT devices will range between 20 – 30 billion by 2020, according to Allied Market Research. However, IoMT still has several issues to resolve: like the question of security or efficient communication between the devices.

First, AR is great for educating medical students and putting them into the environments that would be maximally close to real-life situations. But that’s not the only way to use this (or VR) technology.

In psychology, the usage of VR with the patients helps to put them in a situation that would be unavailable in the current environment, thus helping to unlock certain memories or identify the pain points.

As for AR, it is used to identify the patient’s veins and place a digital map over it, thus making it easier for clinicians to identify a spot for injection.

As for the medical institutions and healthcare companies, they need to find a reliable and trustworthy development company with a proven record of developing and completing successful and healthcare-related projects. Because healthcare is aimed at one’s well-being, there is no room for a mistake at all. So the reputation and experience of a development company indeed will play the biggest role when healthcare representatives will be choosing their provider.

At DashBouquet we have extensive expertise in developing healthcare-related apps and we are ready to prove it not by words but by actions. Get in touch and learn more – we are always ready to take part in the next big thing.