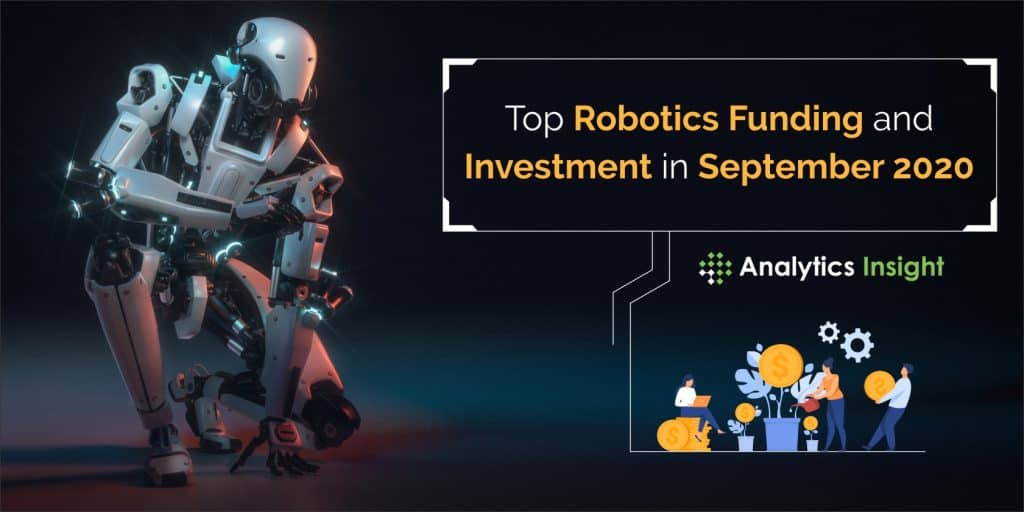 Demand of robots and automation technology is surging the robotics investment.

In recent years, developments and improvements in sensors, motion control and machine learning have made robots and cognitive systems ever more flexible. Already, robots are performing an array of business works and assisting companies and employees around the world. The COVID-19 crisis further emphasizes the need of robotics and automation in order to help industries and society. As the pandemic has accelerated rapid interest in and deployment of robotics, investors are taking a closer look at robotics, along with autonomous drone delivery and associated technologies.

Here is a look at the top robotics funding and investment in September 2020.

Seegrid Corporation, a smart platform that supplies material handling equipment and fleet management software, closed a US$52 million growth equity financing round, bringing the company’s total funding to date to over US$150 million. The investment round previously was announced when lead investor G2VP funded the first US$25 million of the round. The company had the right to top off the round, which was oversubscribed, resulting in a total round of US$52 million with additional funding from leading technology and robotics investors.

Volansi, which builds and operates long-range, heavy-payload UAVs, sealed US$50 million in Series B funding round led by Icon Ventures. The new funds will use to expand its team, launch new projects, and scale current initiatives in both the U.S. and emerging markets. The company has developed and brought to market autonomous drones, including the VOLY M20 and VOLY C10, which it claimed were the first of their kind.

Sarcos Robotics, a leading industrial robotics company that augments humans to enhance productivity and safety, raised US$40 million in Series C funding round. The round was led by Rotor Capital, with most of the company’s existing investors participating in the financing. The latest fund has planned to use to begin commercial production of the company’s Guardian® XO® industrial exoskeleton, the world’s first full-body, a battery-powered wearable industrial robot designed to increase strength and endurance, which is scheduled for commercial release in 2021.

Ouster, which develops high-resolution lidar sensors for use in autonomous vehicles, robotics, and many other applications, secured US$42 million in Series B funding round. Led by Cox Automotive, Tao Capital Partners and Fontinalis Partners, the fund will support Ouster’s new product development and international sales efforts. Using its unique multi-beam flash lidar design, Ouster brings Moore’s Law to lidar with an all-semiconductor approach to 3D sensing.

Roboyo, Germany’s leading robotic process automation service provider, received €21 million in Series A funding.The minority investment comes from MML Capital Partners (MML), a leading growth capital investor with offices in London, Paris, and New York. The investment is one of the largest to date in the RPA market and is intended to further Roboyo’s goal of becoming the world’s leading automation solution provider.

Invento, a Bengaluru-based startup that makes and markets robots, raised US$16 million in a Seed round from iron ore mining company MSPL, textile firm Chiripal Group and a clutch of angel investors. The fresh capital will be used for the company’s global expansion and to build new technologies for its artificial intelligence platforms. The latest fundraise follows two rounds of undisclosed seed investments. One of Invento’s humanoid robots, Mitra, made a presence at the Global Entrepreneurship Summit in Hyderabad in 2017 and greeted Prime Minister Narendra Modi and US President Donald Trump’s advisors.

ThruWave, a producer of millimeter-wave imaging technology designed for markets including robotics, construction, and quality control, secured US$6.4 million in the Seed round. Led by E14 Fund and Ubiquity Ventures, along with additional participation from WRF Capital, Root Ventures, Blue Sky Capital and Tsingyuan Ventures, the company’s total funding to date stands at US$7.2 million. Thruwave produces low-cost sensors for commercial and industrial applications. Its technology helps in lowering the risks by imaging the internal structure of walls, ceilings and floors that enable construction professionals to work efficiently.