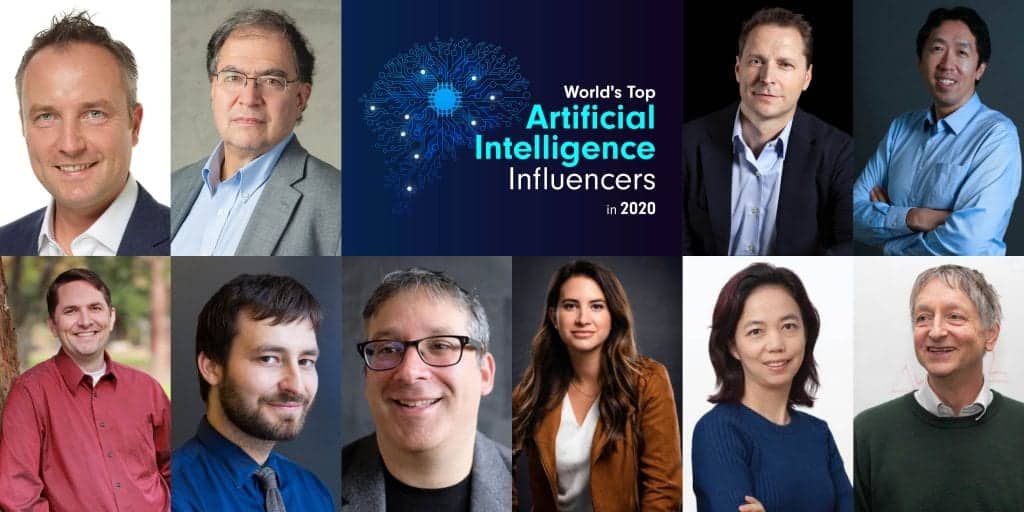 The Artificial Intelligence market has become highly ambitious where skills that can be touted as influential make a large scale mass appeal. Such AI influencers tend to drive the key-value and true essence and potential of technology at different touchpoints. Their inspiring work in their respective field and how they impact a huge audience with their talent and link of work is undeniably a treat to look out for.

Moreover, the current trend of the new and evolving form of influencers is garnering interest among tech professionals to celebrate an ecosystem filled with new-age opportunities and innovations. The AI influencers who have turned into AI celebrities over social media platforms have given perspective to many budding leaders and helped progress the pioneers of a new archetype.

Analytics Insight has come up with the annual list of top 10 AI influencers who are excelling in the technology world with unprecedented vitality.

Bernard Marr is an internationally bestselling author, futurist, keynote speaker, and strategic advisor to companies and governments. He advises and coaches many of the world’s best-known organizations on strategy, digital transformation, and business performance. LinkedIn has recently ranked Bernard as one of the top 5 business influencers in the world and the No 1 influencer in the UK. He has authored 16 best-selling books, is a frequent contributor to the World Economic Forum, and writes a regular column for Forbes.

Bernard is a major social media influencer with over 1.3m followers on LinkedIn, over 175K fans on Facebook, over 120k Twitter followers, over 20k followers on Instagram, and an active presence on SlideShare and YouTube. He is generally seen as one of the world’s top business and technology influencers. Beyond that, his expert comments also regularly feature on TV and radio (e.g., BBC News, Sky News, and BBC World) as well as in high-profile publications such as The Times, The Guardian, The Financial Times, the CFO Magazine and the Wall Street Journal.

Kirk has done his graduation in Physics from Louisiana State University and went on to study Astronomy and earned his Ph.D. from California Institute of Technology.

Ronald is the Director of Advertisement, an organization that helps data-driven companies generating business value with the best of breed solutions and a hands-on approach. He is also an Advisory Board Member & Big data and Analytics Course Advisor for Simplilearn. Ronald has been recognized for his work in the field of digital transformation by such publications and organizations as Onalytica, Dataconomy, and Klout. In addition to these recognitions, he is also an author for a number of leading big data websites, including The Guardian, The Datafloq, and Data Science Central, and he regularly speaks at renowned events and conferences.

Ronald writes relevant articles & host webinars on big data, IoT, data science, analytics, and other digital transformation topics, which he distributes to an audience of over 150,000 social media fans and followers.

He has earned a bachelor’s degree in business administration and went on to pursue a Master of Science from Nyenrode University.

Andrew Ng has worked as the VP & Chief Scientist of Baidu. He is Co-Chairman and Co-Founder of Coursera; and an Adjunct Professor at Stanford University.

In 2011 he led the development of Stanford University’s main MOOC (Massive Open Online Courses) platform and also taught an online Machine Learning class to over 100,000 students, leading to the founding of Coursera. Ng’s goal is to give everyone in the world access to a great education, for free. Today, Coursera partners with some of the top universities in the world to offer high-quality online courses, and is the largest MOOC platform in the world.

Ng also works on machine learning with an emphasis on deep learning. He founded and led the “Google Brain” project which developed massive-scale deep learning algorithms. This resulted in the famous “Google cat” result, in which a massive neural network with 1 billion parameters learned from unlabeled YouTube videos to detect cats. More recently, he continues to work on deep learning and its applications to computer vision and speech, including such applications as autonomous driving.

Adam Coates is currently a Director at Apple. He received his Ph.D. from Stanford University in 2012 and was the director of the Silicon Valley AI Lab at Baidu Research until September 2017, then an Operating Partner at Khosla Ventures until 2018. During his graduate career, Adam co-developed an autonomous aerobatic helicopter, worked on perception systems for household robots, and early large-scale deep learning methods. He developed deep learning software for high-performance computing systems with a team at Stanford, used for unsupervised learning, object detection, and self-driving cars.

Andreas Mueller is an Associate Research Scientist at the Data Science Institute at Columbia University and author of the O’Reilly book “Introduction to machine learning with Python”, describing a practical approach to machine learning with python and scikit-learn. He is one of the core developers of the sci-kit-learn machine learning library and has been co-maintaining it for several years. Andreas is also a Software Carpentry instructor. In the past, he worked at the NYU Center for Data Science on open source and open science, and as Machine Learning Scientist at Amazon.

Gary Marcus is a scientist, best-selling author, and entrepreneur. He is the Founder and CEO of Robust.AI and was Founder and CEO of Geometric Intelligence, a machine learning company acquired by Uber in 2016. Gary is the author of five books, including The Algebraic Mind, Kluge, The Birth of the Mind, and The New York Times best-seller Guitar Zero, as well as editor of The Future of the Brain and The Norton Psychology Reader.

He has published extensively in fields ranging from human and animal behavior to neuroscience, genetics, linguistics, evolutionary psychology, and artificial intelligence, often in leading journals such as Science and Nature, and is perhaps the youngest Professor Emeritus at NYU. Gary’s newest book, co-authored with Ernest Davis, Rebooting AI: Building Machines We Can Trust aims to shake up the field of artificial intelligence.

Marcus’ research and theories, as noted by Wikipedia, focus on the intersection between biology and psychology. He challenged connectionist theories which posit that the mind is only made up of randomly arranged neurons. Marcus argues that neurons can be put together to build circuits in order to do things such as process rules or process structured representations.

She is the US Head of AI Business Development for Startups and Venture Capital at Amazon, advancing the greatest AI companies in the world. Previously, Allie was the youngest-ever woman to build an artificial intelligence product at IBM—spearheading large-scale product development across computer vision, conversation, data, and regulation. Outside of work, She is changing the game of AI.

She was named by Forbes and AI Summit as 2019‘s “AI Innovator of the Year” and LinkedIn Top Voice for Technology 2019. Allie is also the Founder of The AI Pipeline to build stronger diversity in ML, an ambassador for the American Association for the Advancement of Science (AAAS), an ambassador for the 10,000-person organization Advancing Women in Product, and has won the Grand Prize in three national innovation competitions.

She is driven, ambitious, and quick-witted. Allie holds a double-major MBA from The Wharton School, a certificate and award from Stanford Graduate School of Business, and a BA in Cognitive Science from Dartmouth College.

Dr. Fei-Fei Li is the inaugural Sequoia Professor in the Computer Science Department at Stanford University, and Co-Director of Stanford’s Human-Centered AI Institute. She served as the Director of Stanford’s AI Lab from 2013 to 2018. And during her sabbatical from Stanford from January 2017 to September 2018, she was Vice President at Google and served as Chief Scientist of AI/ML at Google Cloud.

Dr. Fei-Fei Li obtained her B.A. degree in physics from Princeton in 1999 with High Honors and her Ph.D. degree in electrical engineering from California Institute of Technology (Caltech) in 2005. She joined Stanford in 2009 as an assistant professor. Prior to that, she was on faculty at Princeton University (2007-2009) and the University of Illinois Urbana-Champaign (2005-2006).

Dr. Li is a keynote speaker at many academic or influential conferences, including the World Economic Forum (Davos), the Grace Hopper Conference 2017 and the TED2015 main conference.

Geoffrey Everest Hinton is a cognitive psychologist and computer scientist, most noted for his work on artificial neural networks. He co-founded and became the Chief Scientific Advisor of the Vector Institute in Toronto in 2017.

Geoffrey Hinton received his BA in Experimental Psychology from Cambridge in 1970 and his Ph.D. in Artificial Intelligence from Edinburgh in 1978. He did postdoctoral work at Sussex University and the University of California San Diego and spent five years as a faculty member in the Computer Science department at Carnegie-Mellon University.

Geoffrey Hinton designs machine learning algorithms. His aim is to discover a learning procedure that is efficient at finding complex structure in large, high-dimensional datasets and to show that this is how the brain learns to see. He was one of the researchers who introduced the back-propagation algorithm and the first to use backpropagation for learning word embeddings. His other contributions to neural network research include Boltzmann machines, distributed representations, time-delay neural nets, mixtures of experts, variational learning, products of experts, and deep belief nets.

How Walmart is Adopting AI Technologies