When Robots change the Retail Industry, leveraging robots in the age of Amazon and Walmart 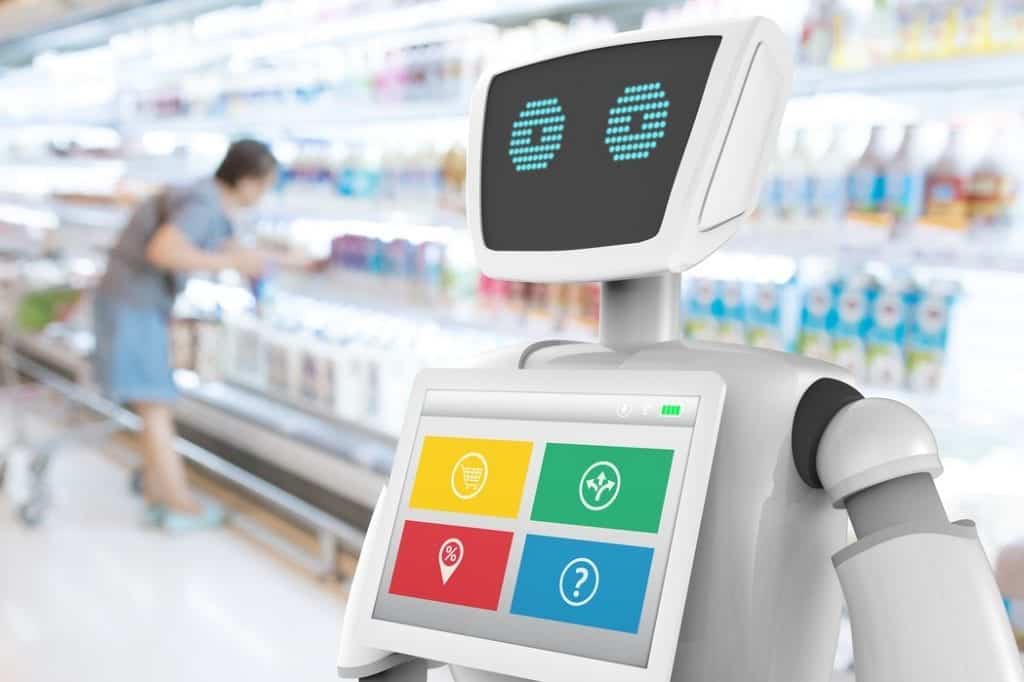 Automation is evolving and slowly changing all the industries, the retail industry is not left far behind where shippers, retailers and restaurants are experimenting with robots, self-driving cars and drones in a bid to use automation to drive down the high cost of delivery.

The Case of Walmart

Walmart is working hard to reduce customer pain points in stores, which include a long line wait or the trouble to find an item. Recently Walmart, announced that it will deploy shelf-scanning robots in more than 50 of its stores to help in making inventory management more efficient.

The two feet tall robot comes with a telescoping tower outfitted with cameras and lights. As the robot passes down an aisle, it scans the shelves to see where the items are low in quality in addition to checking for the correct information or mislabelling errors. Walmart says it wants to use robots for tasks that are predictable, manual and repeatable, thus insisting that robots won’t replace human workers or affect headcount.

Walmart additionally plans to bring robotic floor scrubbers to its 360 stores by the end of the year. It has launched a new app, Dotcom Store, allowing associates to order products for customers on Walmart.com whenever they are out of stock on the shelves.

Walmart relies on 920-pound self-driving scrubbers, also known as “Auto-C,” deploying automated technology to navigate marked routes in the store to mop up the floors, navigating on sensors to scan for disturbances like people and aisles.

Walmart has tested automation to make its work easier which includes, checking items on the shelves, unloading boxes from delivery trucks, selecting items for online grocery and changing price labels on products. The giant is experimenting with a bot in around 500 stores which can unload boxes off delivery trucks to automatically scan and sort the items by department.

In the Future, Walmart foresees robots communicating with each other to deliver customer satisfaction and drive engagement.

All the cases discussed above fall into lines what CEO Doug McMillon calls “tech-empowered stores.”

FedEx has collaborated with the DEKA Development & Research Corp, which invented the iBot stair-climbing wheelchair and the Segway stand-up scooter. The delivery company views that this service operating in 1,900 cities around the world will push the same day deliveries for the retail giant. These battery-powered robots have cameras and software which help them detect and avoid obstacles on their path as they move at a speed of about 10 miles (16 km) per hour.

The retail giant has introduced its cashier-less Amazon Go stores which have experimented with drone deliveries, thus rolling out tens and thousands of robots to shuffle goods at its delivery centres. These robots are named as the Amazon Scout delivery robots and are armed with six wheels which propel the top-lidded robot along the sidewalk at a walking pace. The company presently offers six Scout units on the routes available only on weekdays and during daylight hours for safety measures. To begin with, an Amazon employee will be chaperoning the Scouts in a bid to make sure that the little robots don’t go off to smoke in back alleys. In addition, the Scout will be powered with a sophisticated array of sensors which will prevent the robot from bumping into pets, pedestrians or any other potential obstacles while manoeuvring the streets.

In an innovative move, to make ease deliveries, Walmart owned Flipkart recently deployed an army of robots at its Bengaluru delivery hub. According to the Indian giant, these robots can perform at 10 times more efficiently, compared to human beings. At present, Flipkart has decided to deploy robots at its delivery hub for streamlining its supply chain in India.

These robots, known as Automated Guided Vehicles or AGV, have been stationed at one of its major delivery hubs in Bangalore. At present, the company employs a total of 100 such AGVs which have started operations.

Flipkart views that these robots will help the company to reach 200 million customers helping the company solve for scale, solve for precision and solve for efficiency. These is based on the fact that one single robot is capable of sorting 4500 products in an hour, a figure 10 times more than what a human can do.

Flipkart has deployed these robots, which at present have been programmed to accomplish three basic tasks i.e. picking products from a conveyor belt, scanning them and dropping them on a chute, which is assigned to a specific pin code. These robots have been powered with anti-collision technology, to not get bumped into each other, while performing their tasks.

In the quest to achieve the best, the e-commerce retail industry is locked in a head-to-head battle over efficiency and supremacy where robots will play an increasingly large role in deciding who wins the race making consumers get what they want and when they want it.

Automation: The Future of Data Science