What if the Voice Inside your Head Could Speak Aloud? AlterEgo Broadcasts your Inner Monologue 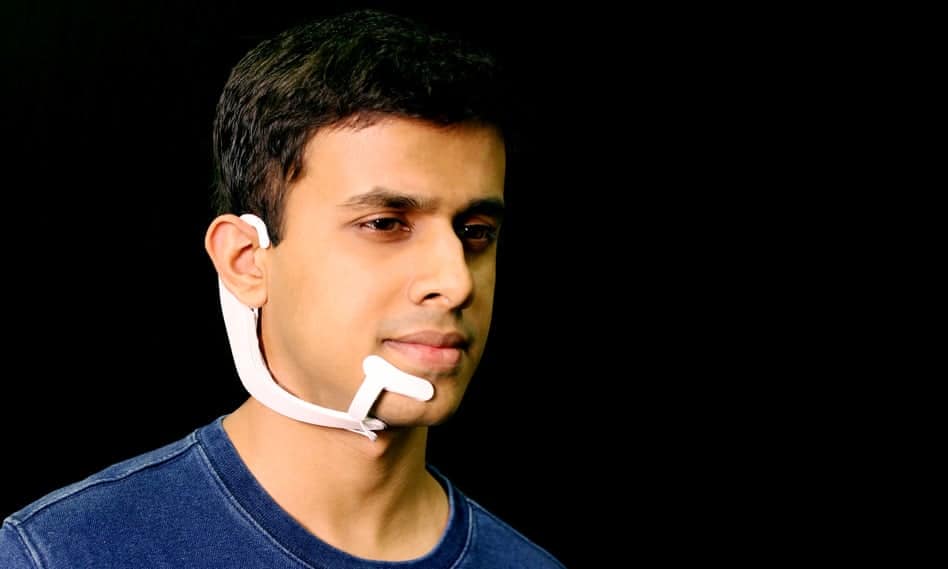 In our era of dwindling privacy, any tech – especially one that invades your personal space – should be viewed with utmost suspicion. One would imagine, then, that Arnav Kapur’s invention of a device which can decipher and broadcast your inner thoughts might be the very worst kind of development!

On the contrary, the 24-year old MIT PhD candidate’s AlterEgo kit is geared towards enabling the audible speaking and recording of an inner voice for very specific, therapeutic purposes.

Is it possible to “hear” the thoughts we mull over constantly in the privacy of our own heads?

Human biology has a lot of background activity we never notice. One such activity is when we talk to ourselves, or think thoughts. Unbeknownst to us, unnoticed signals are still going to our voice boxes. The physical manifestation of speech is still happening, albeit on an incredibly “soft” scale. Manifesting in the form of tiny vibrations that Kapur’s machine detects on the wearer, these thoughts can be spoken out loud or recorded in writing.

AlterEgo is a vital development for many who struggle to articulate their speech and communicate with others, as well as for those who have trouble with their memory. By being able to broadcast internal monologues, perfectly intelligible speech is possible – even for those struggling to communicate with others. The device can also greatly assist those with consistent memory loss, recording the day’s memories in a legible fashion for the wearer to return to in case forgetfulness sets in. Reminders can also be triggered by the system, allowing those who suffer from dementia and other debilitating illnesses more freedom and to remain independent longer.

Kapur’s invention is typical of the ambitious application AI is enabling. Most companies have heard of AI and may have even investigated how they might apply it to their own profitable ends. Of course, an IT support company can assist in making AI application a business advantage. In the case of AlterEgo, many speech-impaired individuals form part of the global workforce. Innovations like Kapur’s device can alleviate difficulties for millions of working adults, speed up daily business and enhance profitability.

Some persistent ethical dilemmas might now be resolved, as well. What of the device’s application in psychology? What of the fact that lie detector technology still struggles to gain acceptance in courts of law? Hypothetically, if participants in a polygraph analysis consented to wearing Kapur’s device during the analysis, would there be a significant difference in the results? When a device employs sensors to detect minuscule neuromuscular signals sent from the brain to a person’s throat muscles, vocal cords and tongue, what can be hidden by anyone?

Before creating AlterEgo, Kapur developed a 3D printable drone, worked on a lunar rover, and developed audio technology that narrates the surrounding world for people who are visually impaired. Turning our inner world into words, however, must be his greatest coup yet. AlterEgo can make legible sense out of the unspoken, even when a wearer is completely silent and not moving their mouth.

The technology’s sensor system detects tiny signals constantly sent out when we think to ourselves. AlterEgo then feeds these signals through AI that decodes them, and the AI responses are heard by the user. The feedback loop is so close to the listener that it’s inaudible to others. Bring in artificial voice technology, and users can actually speak with their thoughts to others, out loud, in a manner many speech-impaired people have been unable to do until now. A user might even think in English, but be able to speak in a translated Mandarin, using the AlterEgo device.

Coming from an altruistic desire to provide solutions for those afflicted with a wide variety of speech pathologies, Kapur is the current poster boy for darling AI.

“Somewhere in the last 20 or 30 years we forgot that AI was meant to enable people,” he explained. “[AlterEgo] could restore the ability to speak for people who can’t.”

With workplaces variably abuzz with ideas about who will be out of work thanks to AI, it’s easy to forget that AI is supposed to make our work easier and elevate our abilities.

Kapur’s AlterEgo is precisely the type of assisting and beneficial AI many have hoped for, as opposed to a Terminator scenario. His invention has won the Use it! Lemelson-MIT Student Prize, an award given for innovative technology in consumer devices. Along with $15,000 in cash to enable him to further refine and register his invention for widespread use, Kapur hopes his moment of fame will allow people to think differently about AI.

Kapur feels AI should enhance human existence rather than lead to a scary reality of AI eliminating human jobs and taking over everyday life. AlterEgo is just such an AI application – wholly beneficial to the user, and resulting in enhanced human relations, be it in workplace comms or personal matters.

“In a way, it gives you perfect memory,” Kapur noted. “You can talk to a smarter version of yourself, inside yourself.”

The young inventor is currently running research trials on a diverse assortment of people with speech issues in the Boston area of the US. Many patients who suffer from cerebral palsy or lost communication after a stroke are finding a new way to regain their ability to communicate. Since their brains are still sending almost undetectable speech signals to their vocal cords, Kapur’s device can tap into and interpret the signals with around a 92 percent accuracy rate.

From soldiers and firefighters, those suffering under dementia, ALS or Alzheimer’s Disease, those wishing to communicate or make notes silently in meetings – even an average citizen making a shopping list on their way to the grocery store – the list of possible applications for AlterEgo is endless.

The Role of America’s Government in Robotics