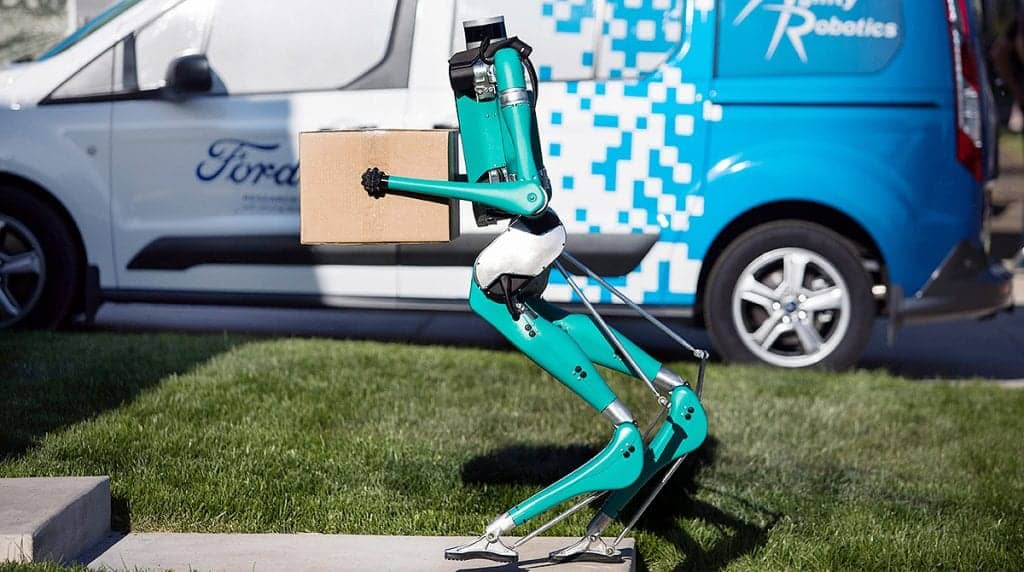 Self-driving vehicles for conveying packages is as of now common enough as a “dream.” As Ford keeps outlining out the self-driving vehicle as a major aspect of the transportation future, the conveyance system that needs to satisfy the client’s a single tick shopping wish adds to its interest.

What great is a self-driving delivery vehicle if the packages are not effectively getting to the client as the last step? Ford has directed its concentration toward a delivery robot.

Agility Robotics has released another model that joins the selective club of humanoid robots. “Digit” is the organization’s first bipedal robot to have four degree-of-freedom arms. It can be utilized those for balance, pushing entryways and lifting boxes as much as 40 pounds, or even to catch it throughout a fall. Digit additionally has an advanced industrial plan that is sleeker than other humanoid bots like Boston Dynamics’ well-known Atlas.

Ford is partnering with Walmart, Postmates and Agility to make robot’s capability flawless for making last mile deliveries. Ford concentrated on a robot with legs in light of the fact that wheeled robots, like those being tried through a partnership with FedEx and Starship Technologies, can’t generally achieve certain doors.

Ken Washington, Chief Technology Officer of Ford believes that gaining access to a consumer’s door regularly requires strolling through snags, including going upstairs and managing different difficulties, which can be hard for robots with wheels to do since just about 1% of homes in the United States are wheelchair-accessible, as indicated by the Department of Housing and Urban Development. Digit has been intended to walk upstanding without squandering vitality, so it has no issue crossing similar sorts of conditions most people do each day.

The robots would be sent from vans or trucks and would spread out across neighborhoods to finish last-mile conveyances. However, discovering places for those vehicles to park with the goal that the robots could make their rounds might be challenging, noted Amy Moore, a research associate for Oak Ridge National Laboratory’s Transportation Planning and Decision Science Group.

Agility Robotics’ new robot, Digit, has come into action. Alongside Ford and its self-driving vehicles, they have taken a shot at Digit as a robot that can help get packages to your doorstep productively. As a matter of fact, think about that the missing last step in working out a jovial home delivery future. Package satisfaction, Done. Self-driving vehicle, Done. Next? Damion Shelton, CEO of Agility, called attention to that “real-world logistics frameworks are made out of many particular pieces.”

Ken further said that together, they will progress in the direction of ensuring self-driving vehicles are remarkably equipped to achieve something that is demonstrated surprisingly hard to do. “Do that last step of getting your delivery from the vehicle to your doorstep.

Washington noticed that there is more work to be done with robot deliveries. “We are endeavoring to decide the most ideal path for our self-driving vehicles to participate with Digit and see how this new conveyance technique can be exploited later on,” he stated, however, including that the business needs “another perspective about how we make deliveries.”

At the point when a goal is achieved, the back door is opened, Digit unfurls itself, takes a package and wanders up to the front way to drop it off. The Agility site said Digit is strong enough to find itself throughout a fall utilizing its arms to decelerate. Digit has LIDAR and a couple of stereo cameras; Digit’s torso houses two multi-core CPUs.

What makes the two-legged robot succeed if moving outside steps to come to the doorstep, or different difficulties: A data interchange between self-driving vehicle and the robot steers the biped. To sum things up, the Ford idea is for autonomous vehicles and their delivery robots to share sensor information.

Charlotte Jee’s “The Download” in MIT Technology Review called the combination of driverless vehicle and robot convincing. Particularly in light of the fact that the two could share camera and lidar sensor information to enable each to comprehend their environment. The robot could likewise charge in the vehicle, decreasing the requirement for bunches of massive batteries.

What’s more, indeed, it will go large scale, believes Dr. Damion Shelton, Agility CEO and co-founder. They created Digit for a lot bigger group of audience of consumers who wish to go through more extensive applications that are empowered through legged mobility, as opposed to concentrating just on the mobility itself. Agility Robotics will release pricing in mid-2019, with deliveries beginning in Q1 2020.