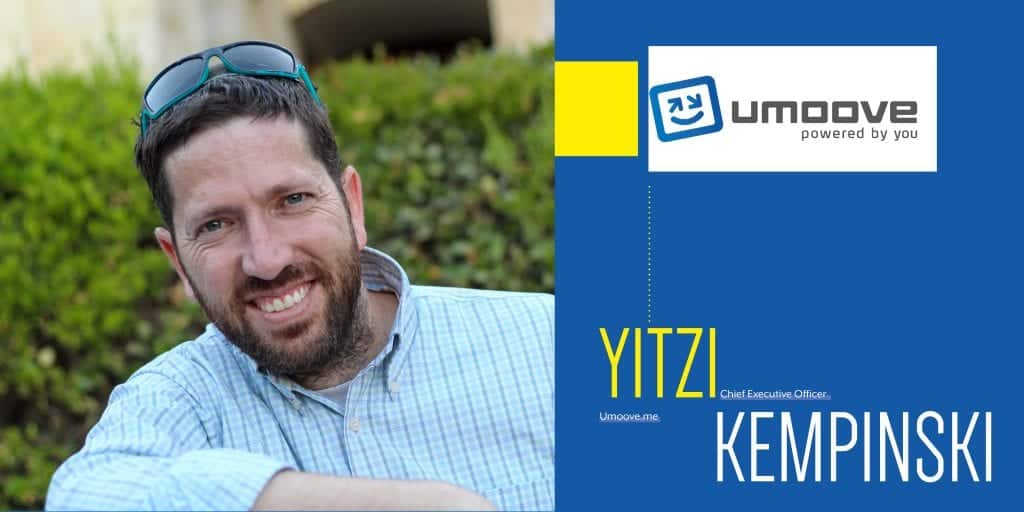 Umoove is the first-ever, pure software, face & eye-tracking technology, for any mobile device without any additional hardware needed. Umoove has created a unique technology (with 6 patents granted and more pending), built from the ground up, which has attracted the attention of many of the biggest companies in the world.

With Umoove’s software, any device can become capable of seeing the user and looking him in the eye. This opens many new possibilities in a range of markets such as healthcare, security, gaming, e-commerce, VR/AR, advertising, automotive and more. Umoove can be easily integrated to enhance various existing apps as well as be the driving technology for entirely new applications.

One of the Umoove’s unique products is DevicelessVR. This solution can finally make VR accessible to mass-market for everyday use. It allows users using an app or browsing the web to immerse themselves in a VR-like experience without putting on a headset at all. This magic is achieved by changing the content on the screen based on the user’s movements, creating an illusion of looking around a 360 environment. So, virtual tours of property and stores, 360 videos and more can all be part of the regular everyday content consumption.

Umoove has been used commercially by millions of users and today works with various partners to bring more Umoove powered apps and experiences to the market.

Accentuating the Next-Gen Needs Since Inception

Umoove was founded in Jerusalem back at the end of 2010. The company had been exposed to the power and potential of eye-tracking being used then, mainly by researchers and ALS patients (or at least those who could afford the very expensive device).

At that time, the first smartphones with front-facing cameras began to appear in the market. Everyone was excited about the touch interfaces, but Umoove had begun thinking about the next step. What if, it could bring eye tracking to any device, take it out of the labs and into the real world, the use cases it thought of were endless. So, the company started on its journey. It studied the technologies and methods that were out there and then tried to optimize them for use on a mobile device (well a 2010 mobile device). When Umoove ran that first version of the device, it just froze and had to be restarted, as the requirements of this type of tracking technology, using the common approaches, were far more than the devices could handle.

At that point, Umoove realized that it would need to either give up or reinvent a new approach to face and eye-tracking that would be built for this low quality, unstable and limited resource environment. As stubborn Israeli entrepreneurs, giving up was not an option, and the company took the long route of many years of building an entirely new mobile-focused technology bringing it to where the company is today with its light-weight, pure software, robust tracking technology, used by millions of users globally.

Umoove’s CEO Yitzi Kempinski is a self-taught engineer who has been building and innovating in tech for 20 years since establishing his first company in high school. At the time when Umoove was founded, he had no background in computer vision, he has since filed and been granted multiple patents in this space and has become a guest speaker in conferences as an expert and leading innovator in this space.

Umoove solutions in AR/VR is split basically into two:

1. Enabling companies to integrate eye tracking into their AR/VR devices/solutions, opening up many powerful possibilities.

2. DevicelessVR – As mentioned above, this breakthrough product enables experiencing VR content on any screen in a very natural way without the need for a headset. This enables VR to reach mass-market for everyday use cases.

As the new-age mechanisms have taken over the world and advancing in varied industries, Yitzi believes that disruptive technologies enable AR/VR to gradually move from an entertaining gimmick to a solution solving real problems and opening up new possibilities.

With new experiments come new challenges and those can be solved by an innovative approach. Innovation is the key to thrive beyond hurdles today and achieve the unachievable. According to Yitzi, Umoove technology was built from scratch, ground up, to solve the major technological challenges in bringing a face and eye-tracking to the real-world environment without any dedicated hardware.

The company has been recognized by Forrester as one of “5 Pioneer Vendors Reinventing Human-Computer Interaction”. It was listed by Forbes as one of 10 Health tech companies changing the world” and by Inc as one of “10 companies helping humanity”.

Forbes has named Umoove under “5 most disruptive innovations at CES 2015” while iNNOVEX Disrupt 2015 recognized the company as one of “8 most innovate companies in Israel”.

When Umoove’s first demo app launched, without spending a dollar on PR, it reached over 100K downloads in a few days. Social networks, blogs and press coverage showed great user excitement with titles such as “The coolest iPhone game you have to download right this second” or “One of the most exciting innovations to hit iOS devices in ages.”

A Future with an Integrated Approach

Commenting on the Future, Yitzi believes a majority of dedicated AR/VR devices providing full immersive experiences will be focused on providing important but niche solutions, whereas partial AR/VR experiences, will become more and more integrated into people’s every day.