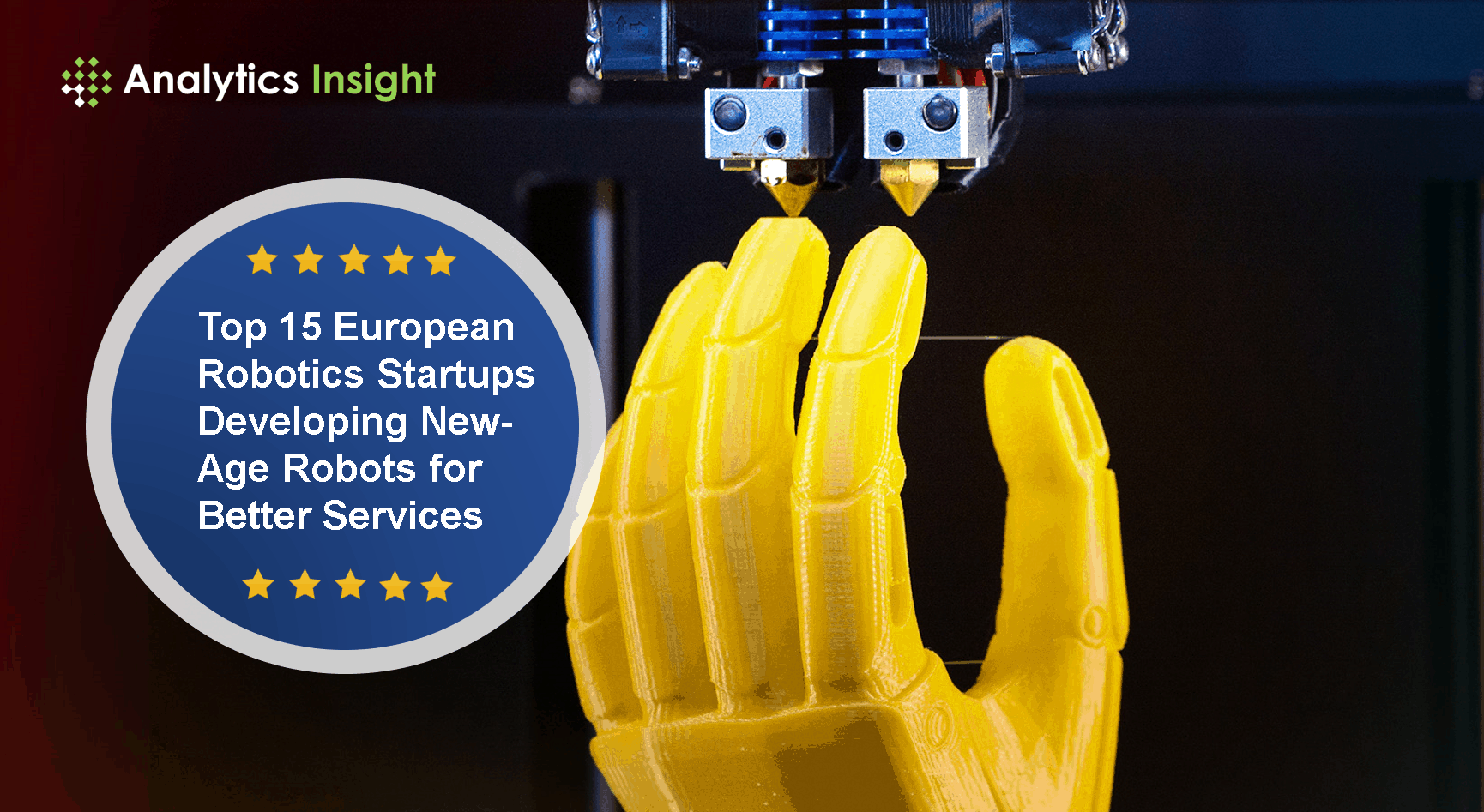 In present times, we can observe a number of startups are mushrooming all around the world. Well, startups may be small and budding companies but they play a crucial role in economic growth of a country. These startups tend to create quality and quantity of job opportunities and hence improve the economy.

Below is a list of top 15 emerging robotics startups of Europe which are developing new-age robots and contributing to dynamism of nation’s economy by spurring innovation and spearheading competition for providing better services.

Aether Biomedical is a startup based in Poland which was founded in 2016. The company is developing a low-cost but high efficacy prosthesis Zeus which is bionic limb with 14 grip modes. The bionic limb uses EMG electrodes for advanced signal processing while providing wireless gain adjustment. Also, the sensitivity and smoothness of such signal can also be manipulated.

Automato Robotics was founded in 2018. The Israel-based startup is creating a robot for harvesting fresh tomatoes specially in passive greenhouses. According to the company, its focus is on single (not vine) tomatoes that are grown in soil greenhouses or high-tunnels. This particular robot is capable of carrying 90kg directly on itself or tow much heavier loads.

Axiles Bionics is a Belgium-based startup which is developing a prosthetic ankle-foot prosthesis known as AMP-Foot. According to the company, the prosthesis is capable of bringing back a natural gait and posture during daily life activities. The robot is also flexible and highly responsive to the person’s intention and to the environment as well.

Cyber Surgery, a startup founded in 2017, develops a robotic system for spinal procedures. It is a spin-off from the industrial group Egile and its headquarters in located in San Sebastian (Spain).

The German company Formhand was founded in 2018. It makes granulate-based vacuum grippers capable of adapting and handling objects with different shapes. These grippers feature a modular design that makes it easy to scale the technology, says Formhand.

IMS is developing the Archimedes drive, a planetary transmission that uses friction instead of gear teeth to transmit torque. The company was founded in 2016 in Delft, The Netherlands. It has won Automate’s Launch Pad Startup Competition. Archimedes drive is invented by IMS founder and CEO Jack Schorsch, and it offers low-input friction, minimal backlash and ratios of 10,000:1.

IntSite is an Israeli startup which was founded back in 2017 by brothers Tzach and Mor Ram-On. The company is developing autonomous cranes using IntSite’s computer vision technology which analyzes camera feeds in real time for obstacles avoidance. Technology’s automated controls improve the cranes’ precision by nearly 30 percent.

Kinfinity is a German startup which is developing the Kinfinity Glove. The glove is a new generation of multi-modal input device for use in various applications, including robotics.

Life Science Robotics is a Danish startup which is building ROBERT. ROBERT is a rehabilitation robot focusing on active resistive and assistive mobilization of the lower extremities. The company’s idea envisions the use of KUKA LBR iiwa collaborative robot arm to release healthcare workers of heavy and continuous lifting, which causes excessive physical strain. The innovation is beneficial to the patients as it can prevent soft tissue contracture and pressure sores while minimizing risk of blood clots and pneumonia. It can also reduce muscular atrophy and neuropathic effects.

LuxAI is a Luxemburg-based robotic startup. It is developing the QTrobot, which is a proactive social robot structured to help autism professionals in helping children with autism spectrum disorder to learn new social, emotional and communicational skills. According to LuxAI, a home edition of QTrobot will be soon available for the parents.

It is a Denmark-based startup which is automating the picking and sorting of sausage casings. Proxima Centauri says sausage casings need to be sorted as per their diameter to produce consistent sausages. Automating the manual sorting process will reduce processing time and improve the traceability and quality of the product, according to the company.

The Swiss startup offers improved logistics through cargo drone delivery. Rigitech’s drones combine vertical takeoff and landing technology with fixed wing range capabilities and is able to carry up to 3kg. The company says its applications include e-commerce, healthcare, humanitarian efforts and significant others.

Robotical is an UK-based startup which is also a maker of Marty the Robot. The robot is designed to teach kids how to code. It comes as a kit or pre-built instructions and is Wi-Fi enabled. It has 9 individually controllable servo motors. People can use an app to control Marty remotely and add a bunch of sensors to react to the environment. The robot can be programmed through Scratch, Python, Javascript and ROS.

Rovenso was founded in 2016. The Swiss company develops an autonomous mobile robot known as ROVéo for security application on industrial sites. The robot combines 3D laser scanning, night vision, thermal vision and acoustic analysis while using multi-modal sensor fusion to detect the slightest anomalies. The robot is based on patented technology and is capable of tackling rough terrain and climb stairs by adapting to their shape.

Scaled Robotics is a Spain-based startup which makes mobile robots for navigating construction sites to collect 3D maps. These 3D maps are uploaded to the cloud for better tracking of the progress of a job. It can also be used to check the quality of construction to discover potential mistakes.

Robotic Technologies and Use Cases for Business Deployment