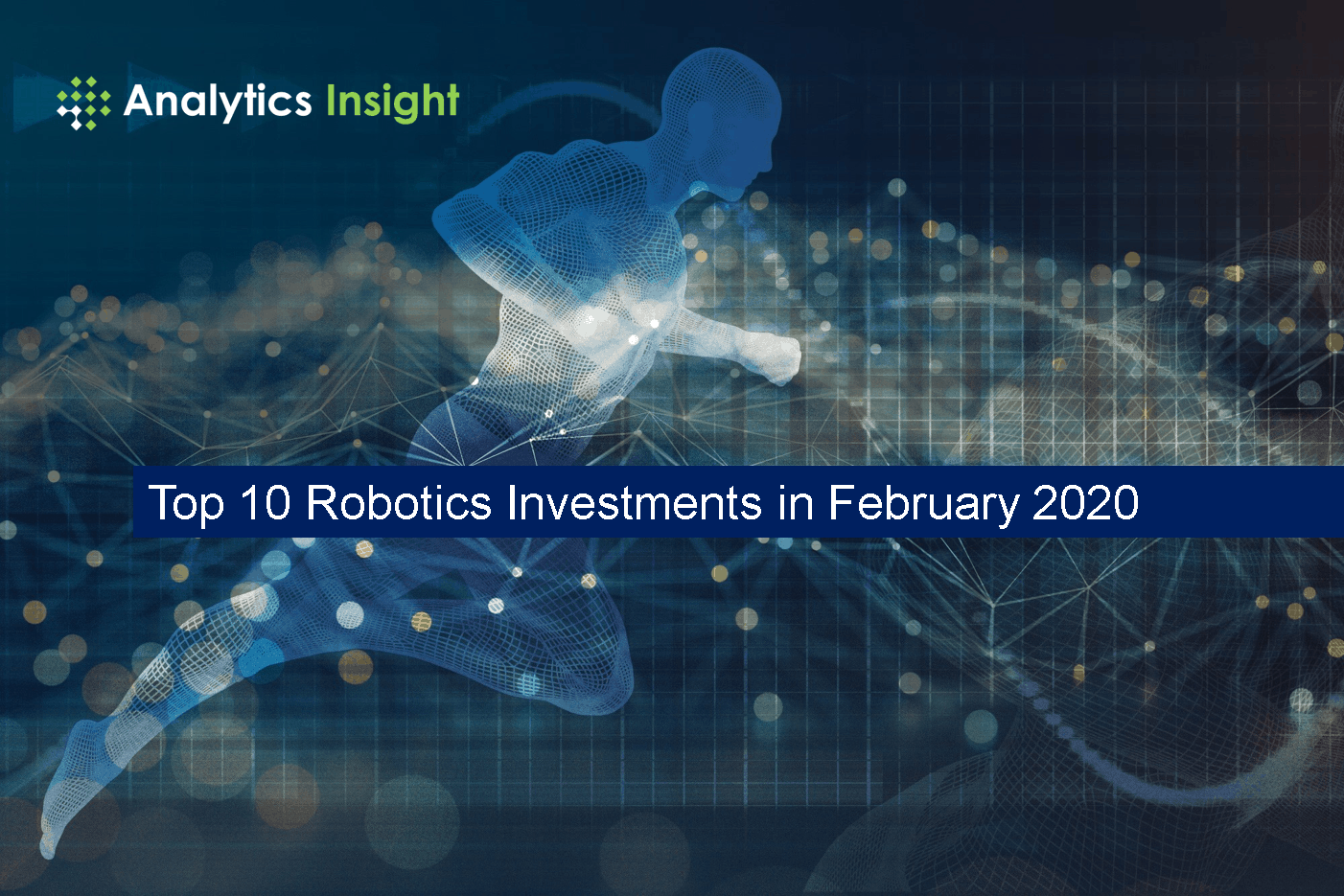 Robotics has a huge potential to contribute to growth, job creation and solving major societal challenges. Regions should fully exploit potential in terms of contribution to local economies, for instance, advanced robotics technologies with increased flexibility can play a key role in making local manufacturing and production competitive again, and also contributing to a greener economy, with the potential to re-shoring some industries (e.g: food supply). The health and monitoring domains also show great potential at the regional level, since these cannot be delocalized. Therefore, it becomes a necessity to provide resources to those who have innovative potential to foster robotics as a field.

Several robotics companies are securing great deals to enhance their business prospects along with some great innovations to transform the industry operations. As noted by Robotics Business Review, here are the top 10 robotics investments/funding in February 2020.

Israeli AI personal robot company Temi Global Ltd. has closed a US$15 million financing round led by the Chinese venture capital firm Joy Capital and John Wu who has invested over US$ 30 million to date in temi. The company says it will use for marketing and sales initiatives of its Temi intelligent, mobile, personal robot. Temi CEO and cofounder Gal Goren said, “This investment is aligned with our company’s strategy to broaden our global business with worldwide partnerships while transitioning to rapid growth in our robot and software services sales.”

Robotic Skies, Inc., an Alabuquerque, N.M.-based maintenance network for commercial unmanned aircraft systems (UAS), received a strategic investment from CerraCap Ventures. The amount of the deal was not disclosed. The company intends to use the funds for continued growth and technology development. Led by Brad Hayden, CEO, and Founder, Robotic Skies a global network of commercial UAS maintenance Service Centers. It provides turnkey maintenance solutions designed to scale with the needs of unmanned aircraft manufacturers and enterprise operators.

Ready Robotics raises funding for Forge O/S robot arm software. Ohio-based company said that it had raised US$23 million, led by Canaan, to expand its robotic O/S. The startup counts major manufacturers like Stanley Black & Decker and Smith+Nephew as customers, as well as smaller shops that would not otherwise be able to automate. The new funding brings Ready Robotics’ total investment to US$42 million at a valuation that Forbes estimates at US$70 million, up from US$32.5 million after its last round, according to venture-capital database PitchBook. “Factories are hungry for robotic automation, but there are only 32,000 robotics engineers employed in U.S. manufacturing today and there are not enough systems integrators,” Gibbs, the company’s 37-year-old CEO, told Forbes.

Fremont, Calif.-based Pony.ai announced that it has raised US$462 million in funding. Pony.ai was founded in 2016 by James Peng, who is now CEO, and Tiancheng Lou, who is now chief technology officer. Both of them worked previously at Google and Baidu. The startup, which has facilities in the U.S. and China, has developed a perception module that it said “combines the strengths of a heuristic approach and deep learning models,” as well as sensor-fusion technology. Toyota led Pony.ai’s latest fundraising round, which brings the self-driving startup’s valuation to more than US$3 billion, reported Reuters. It also participated in previous rounds.

Medical technology leader Medtronic PLC announced that it has acquired Digital Surgery, a privately-held pioneer in surgical artificial intelligence, data and analytics, and digital education and training. Medtronic said the purchase will strengthen its robot-assisted surgical platform and its broader portfolio. The terms of the acquisition were not disclosed. Dublin, Ireland-based Medtronic has more than 90,000 employees worldwide, serving physicians, hospitals, and patients in more than 150 countries. Last fall, the company unveiled its Hugo robotic surgery system.

The Boston startup Freight Farms that builds automated farm systems in shipping containers raised US$15 million in a Series B round led by New York City-based Ospraie Ag Science, which invests in agtech companies. Existing investor Spark Capital also participated in the round, which brings the company’s total funding to more than US$28 million. Freight Farms runs a network of smart farms across 44 states and 25 countries. Each smart farm called a “Greenery” is housed in a 320-sq.-ft. hydroponic shipping container. These vertical farming containers are all linked to the startup’s data platform, Farmhand.

Small Robot Company, which makes precision agricultural robots, confirmed that 7 percent Ventures has invested £200,000 (~ USD 259,000) in the company and is now Small Robot’s lead investor. Small Robot is running its equity crowdfunding on CrowdCube and has raised £2,003,880 (USD 2,596,000) from 1670 investors so far. What is not known right now is whether 7 percent’s money is included among that tally, or if it’s a separate investment.

Roybi, the maker of a pill-shaped robot to teach language and math skills to young children, has acquired additional technology to power its educational features. The Mountain View, Calif.-based company has acquired the KidSense artificial intelligence engine developed by Kadho. Financial terms of the deal were not disclosed. Based in Irvine, Calif., Kadho has spent the past five years developing the KidSense engine, which recognizes children’s speech and is based on speech and voice data from about 150,000 children, according to Roybi CEO Elnaz Sarraf. Developed with experts in language development, the technology covers languages including English, Mandarin, and Korean. It can also account for regional dialects, she claims.

Finnish autonomous driving technology pioneer Sensible 4 has raised US$7 million in their series A funding round that will see the company market expansion to Europe and Asia. Sensible 4’s first investment round was led by NordicNinja VC, over €100 million Nordic deep tech fund backed by Japanese tech companies and ITOCHU, one of the largest Japanese trading companies. The Finnish technology startup specializes in autonomous driving software for demanding and harsh weather conditions. Challenging weather and limited sensor visibility have long been a problem for driverless vehicles. The company’s solution — which is first in allowing for self-driving in snow, fog and heavy rain — has attracted growing attention from major automotive players since the startups’ inception in 2017.