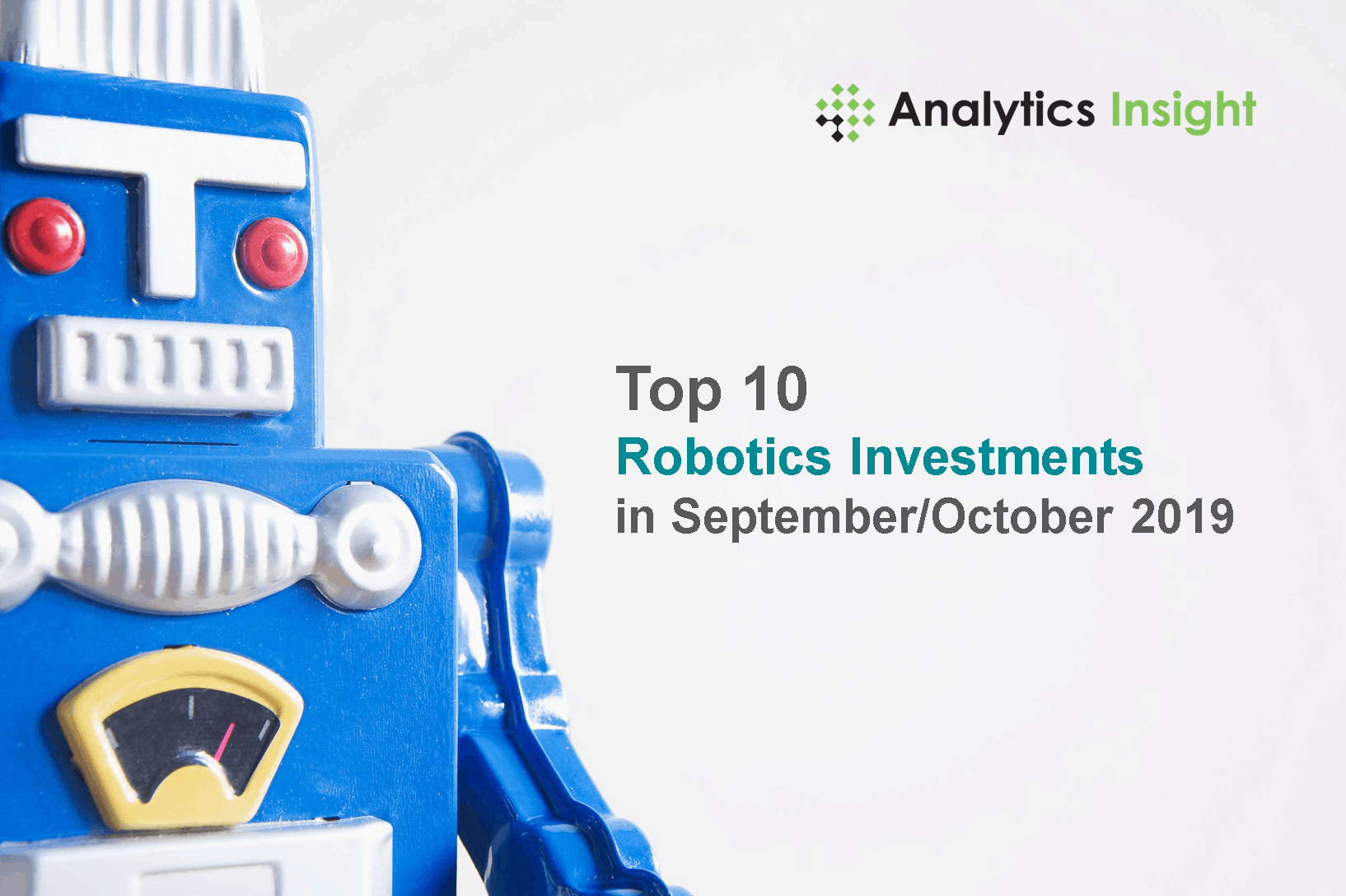 Advancements in technology have led to the adoption of Robotics and automation across industries. This has also enabled companies to invest a huge amount of capital on emerging technologies to automate their business processes.

In comparison to August, robotics, and automation investments were more than US$2.4 billion in September 2019. However, this amount was less than around US$10 billion in the same month in 2018 or July this year. In August 2019, the amount was worth US$2 billion.

Here are the top 10 robotics investments that ruled the robotics space in September/October 2019.

CMR Surgical is a Cambridge, UK-based medical device company that develops the next-generation surgical robotic system for minimal access surgery. In September 2019, LGT Lightstone, along with Escala Capital Investments, Cambridge Innovation Capital, Watrium, and Zhejiang Silk Road Fund invested US$240 million into CMR Surgical in Series C round for its Versius surgical robot. In June last year, the company had secured a US$100 million in Series B round and a US$20 million in Series A in July 2016.

Postmates is an on-demand logistics provider, offers a platform that allows users to discover, order, and track food. Based in San Francisco, CA, the company is focused on fast deliveries from any type of merchant at scale. In September, the company has closed a US$225 million in a new private equity round, led by GPI Capital. With this new capital, Postmates’ total funding amount has reached US$906.5 million.

Anduril Industries is an Orange, CA-based defense technology company pioneer in life-saving AI platforms to safeguard troops, fight wildfires, perform search and rescue missions, among others. On September 11, the company clinched a US$127 million in a seed funding round, led by Andreessen Horowitz. Anduril Industries commits top technical talent to solve the most compound national security challenges. The company’s mission is to build cutting-edge technology that allows America and its allies to maintain global leadership now and into the future.

Evolver is an AI and Robotics company, and a national high-tech enterprise in China. Based out of Beijing, the company has formed a strategic collaboration with authorities in Qingdao, a coastal city in East China’s Shandong province. As part of the partnership, the government of Qingdao’s Jimo district invested CNY 500 million (US$70.50 million) that will help Evolver to expand the product mix as well as to upgrade the core technology, which develops a companion and teaching robot called Fabo.

DeepRoute is an L4 Full Stack Self-Driving System Provider raised US$50 million in October in a fresh funding round, which was led by Foshun RZ Capital, with participation from GoldenSand Capital, Yunqi Partners, Ventech China, and Green Pine Capital Partners. Headquartered in Shenzhen, Guangdong, China, the company’s research centers located in Shenzhen, Beijing and Silicon Valley.

Voyage Auto Inc., a Silicon Valley-based startup, offers autonomous taxicab services allowing anyone to receive its self-driving vehicles to their door and reach their destination safely. Headquartered in Palo Alto, CA, the company, on September 12, announced that it has completed a US$31 million Series B fundraising round that will be used to further develop its technology, increase headcount, expand its fleet of G2 autonomous cars, and launch its G3 vehicle.

Takeoff Technologies, a Boston, MA-based tech startup, leverages an automated software platform to assist grocers to thrive in e-Commerce. Recently, on September 16, Forrestal Capital invested an amount of US$25 million in Series C round in Takeoff, which gives Forrestal a 5% stake in the company. With this fresh funding, the company’s total valuation reached US$500 million and brought total funds raised to $US86 million.

Game Tree and Optimization under Adversarial in AI

Data Analytics: Everything Students Should Know About