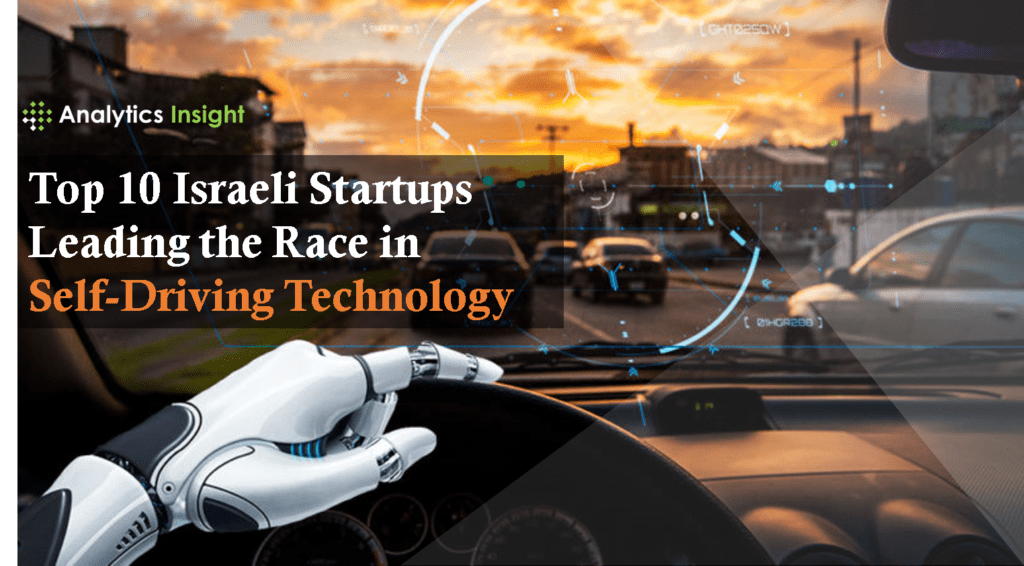 The US, China, Singapore, Greece and Japan – All have been gunning autonomous vehicles since years now. Now Israel is another country to join the club. Israel has become a focus for car technology in recent years. Large companies such as General Motors, Toyota, Skoda, Volvo, BMW, Honda, Hyundai and some others have built R&D centers in Israel to develop self-driving cars.

Israeli startups don’t find themselves much behind in this race of driverless tech. Here are some groundbreaking startups in Israel that are contributing to the self-driving car technology  –

Cognata uses its patent technology to automatically generate a whole city-simulator including buildings, roads, traffic signs and even trees & bushes. They are trying to speed up the time it takes to fully train autonomous vehicles by creating a virtual environment to test the cars.

3D simulations are created using AI and deep learning. With AI, Cognata’s software is able to study driving habits of residents of San Francisco, Munich and Tel Aviv (the second most populous city in Israel). This study will enable them to recreate a virtual environment and distinguish between aggressive and less aggressive drivers.

The company has raised $5 million in fundings till date and has even entered into a partnership with Microsoft and Nvidia for their cloud resources.

Regulus defends sensors and communication channels from being spoofed. They are safeguarding sensors in autonomous vehicles from hacks. Many autonomous car developers are not dealing with this, to a great extent, because sensors need to be cost-effective and last for over 15 years, whereas cyber threats change all the time.

But this is no reason to develop a more secure car. Little attention has been given to securing sensors such as GPS, camera and even Radars. Integrating with their tech, self-driving car developers can make sure no hacker messes up with the controls of the car.

How does their tech work? – A sensor is attached in the middle of the car which identifies all fake signals. An alarm is triggered while the car neutralizes the sensor that is being intercepted.

The startup has raised $6.3 million to date.

Since we’re already talking about security, the startup – Argus Cyber Security – is protecting cars, trucks and commercial vehicles from hacking. There will come a time when millions of cars will be connected with each other via the Internet. Threats to the safety of passengers and even pedestrians will grow substantially. Imagine losing complete control over the speed, steering wheel and the brake on a speeding highway – Havoc!

2 of the 5 Major Solutions by Argus Cyber Security –

Autotalks is a semiconductor company with V2V – Vehicle to Vehicle communication tech in driverless cars. Autotalks’ V2M tech for Vehicle to Motorcycle communication is widely recognized in the automotive industry. It works on situational awareness to help prevent on-road accidents with motorcycles that are small, fast and hard to see.

Their V2X tech warns drivers of upcoming hazards and helps sense any stationary or moving object that is around the corner or hidden behind another vehicle.

These specific V2V, V2M and V2X solutions will help save lives to a great extent when it comes to autonomous vehicular technology.

Cortica is primarily focused on providing autonomous AI solutions in various disciplines of medicine, automobiles, etc. They boast of having a patented technology that enables the car to predict and react to any situation ensuring a safe, intelligent and efficient driverless driving experience.

Its robust technology identifies all tangible objects from baby strollers to hoverboards. Along with its sensory tech, they have included an added layer of predictive AI. This allows the system to place probabilities upon an object’s next course of action while simultaneously predicting additional objects that are likely to enter the frame.

Oryx has developed an advanced LiDAR (Light Detection and Ranging) sensor based on their groundbreaking light-sensing antennas. Their sensors are better, cost-effective and use less energy than other sensors.

They boast of having a modulated LiDAR that has a million times better signal-to-noise ratio than other scanners. These LiDARs are not blinded by the sun or other LiDARs.

Simplicity is the ultimate sophistication. And with their technology, the car’s software will make faster and better decisions using simpler algorithms & fewer compute resources due to a more precise and longer range view of its surroundings.

Arbe Robotics is a startup with roots in Israeli military radar technology development. The company offers solution for level 4 full autonomous driving based on its proprietary imaging radar.

Arbe Robotics’ imaging radar provides a high resolution of 1° azimuth and 1.25° elevation, at distances exceeding 300 meters and at a wide field-of-view of 100°.

Arbe Robotics’ advanced technology allows the detection of small targets, such as a human or an object even if they are masked by a large object such as a truck. The imaging radar can determine whether objects are moving, and in what direction, and alert the car in real-time about a risk.

The company has collaborated with the European self-driving car consortium Vedecom  to protect autonomous vehicles from cyber attacks.

Karamba Security has secured $10 million in funding from Silicon Valley-based Western Technology Investment (WTI), in April this year, bringing the total investment in the company to $27 million.

The dashcam app relies on computer vision and sensor fusion to detect accidents and analyze road conditions. It then sends real-time alerts to other vehicles on its network. Nexar ’s techology is also used by insurance companies for collision reconstructions to help with claim investigations.

Nexar has raised $45 million in total funding and focusing to build its vehicle-to-vehicle (V2V) network by signing partnerships with insurance companies, drivers on ride-sharing services like Uber or Lyft, automakers and municipalities that use its tech to monitor traffic and street infrastructure.

Valens, a semiconductor company, has developed HDBaseT Automotive which combines the best of alternative existing technologies into one, simple solution for in-vehicle connectivity for the connected cars.

The HDBaseT Automotive 5Play feature set revolutionizes in-vehicle connectivity with the convergence of audio & video, Ethernet, USB, controls and power over a single pair.  HDBaseT has entered into the advanced testing stage with leading automakers and Tier 1 suppliers. It will move to the next phase with its first production program set for a ʼ20-model Mercedes vehicle platform.

Moreover, Valens has created its own standard for in-car communication in the automotive industry with HDBaseT. Today the HDBaseT Alliance has over 190 companies including GM, Daimler and Delphi.  Valens has raised about $100 million in funding to date.