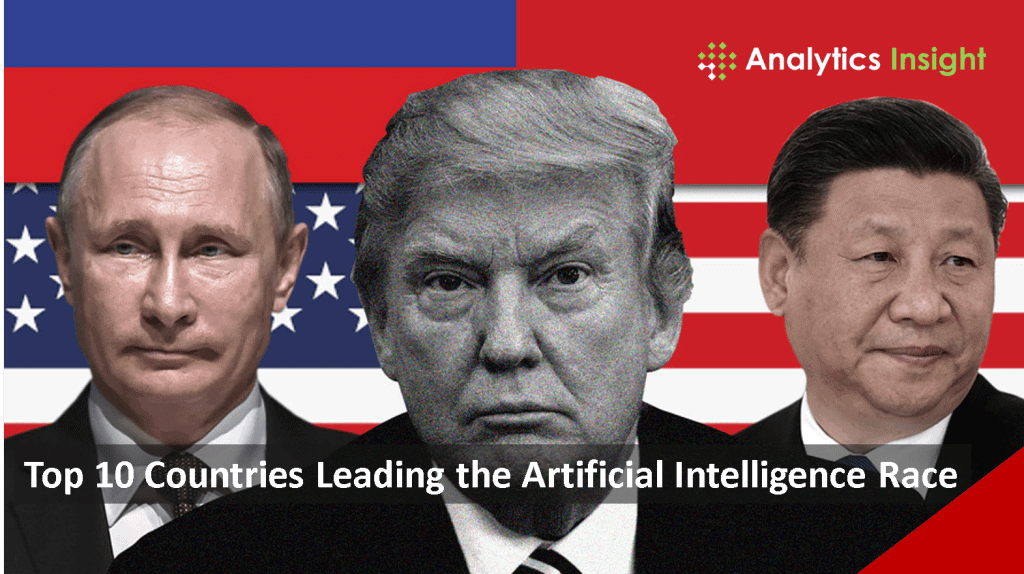 The current ravishing trends of Artificial Intelligence is hailing all the industries across different countries. AI has the power to recognise faces, run autonomous cars, deliver better online outcomes and strengthen business in various industries. Not too much of surprise, the developed, developing and under-developed countries all are focusing on AI adoption for better futuristic opportunities and development. While AI technology is flourishing within and beyond the circumference of the world, some major AI powers are working hard on winning the race.

Here is a list of top 10 countries leading the AI rush all across the globe.

China has always held ambitions significantly high for becoming AI Superpower of the world. In light of this goal the State Council of People’s Republic of China has declared to become a $150 billion AI global leader by 2030. The goal is not just vague but looks like achievable as it is already a global leader in AI research.

Moreover, the country has published a number of research papers on deep learning which is comparatively more than other leading countries. The biggest benefit is brought by its population using internet (approximately 750 million people) generating huge supply of digital data to process.

The United States of America is giving a tough competition to China in terms of becoming AI superpower. With the well-established tech culture in US, the country has been benefited with $10 billion venture capital channeling in direction of AI.

But the future of AI has become unclear and is expected to decline due to recent country activities including reduced funding for AI, acceleration in education costs and strict immigration restrictions for international research professionals.

In the continent of Europe, the UK is the clear leader with 121 AI-empowered firms. Tech companies in the UK raised private investment sum of $8.6 billion in 2017. The amount is almost 38 percent of entire venture capital investment done in the United Kingdom that year. The same year UK government announced the funding of $78 million to support robotics and AI research projects.

The government of Canada plays an important role in investing into AI projects. In march 2017 the Canadian government committed to make $125 million investment for AI research. Significantly, after the US presidential election won by Donald Trump, Canada started recruiting AI talents.

Moreover, the Quebec government has forewarned that it is necessary to level up the significant investment with that of the UK and China or else Canada will lack behind in becoming AI worldly power.

According to Russian President Vladimir Putin, the AI leader will rule the world. The country invests $12.5 million annually on AI. It has also been observed that the real robustness of Russia in AI comes from confined participation of government in public and private AI engagements. Additionally, a number of AI demonstrations of the country are military in nature for example AI-empowered fighter jets and automated artillery.

The country is well known for its clockwork efficiency and is sufficiently versed in technical know-how. Germany is all set to blend its tradition with technology innovations. The country is self-assured to possess a leadership in robotics, autonomous vehicles and quantum computing.

Additionally, the Cyber Valley of Germany is luring a lot of international interest and investment.

Norway is showcasing its desire to go beyond oil drilling and fishing past and acquire some technological credentials. Although, the country has a long way to go to become AI power yet the accelerator program launched in 2017 with $11 million of funding to develop Norway as a technological hub is giving some serious leadership goals.

As recent survey conducted in Sweden shows that 80 percent of residents are positive about AI and robots which means it would not be much of a pain for the country to replace human workers with AI. Rather who are well-versed in AI and technology are more likely to extend their support for automation expansion amongst the various industries flourishing in Sweden. The Swedish union and workers are also giving green signal to AI as they believe it will enhance the most of human skills and obtain a competitive edge in global market.

The government of France is investing $1.8 billion in AI researches until 2022. The French AI initiatives will zoom into data with strategy to make private companies publicly release their data for utilising it as AI use-cases. Certain other initiatives will also focus on research firms and strengthening them over the time.

A certain amount of funding will be invested in AI research partnership with Germany (the amount is yet undisclosed).

India being a fast growing and developing nation, going through a lot of transformation in its digital space. The impact of technology like artificial intelligence (AI) in the country can be measured from the influence of digital technologies on the economic elements and GDP which is 8 percent. The percentage is expected to increase to 60 percent in the next two years.

However, any budget allocation has not been provided by Indian administration yet the country is determined to lead the AI race by embracing a number of AI initiatives.

Tech Giants Collectively Lost US$ 1.3 Trillion Due to Coronavirus

Artificial Intelligence: What Should Worry Us?