How Technologies like AI, Robots, Drones Help China to Fight Against COVID-19? 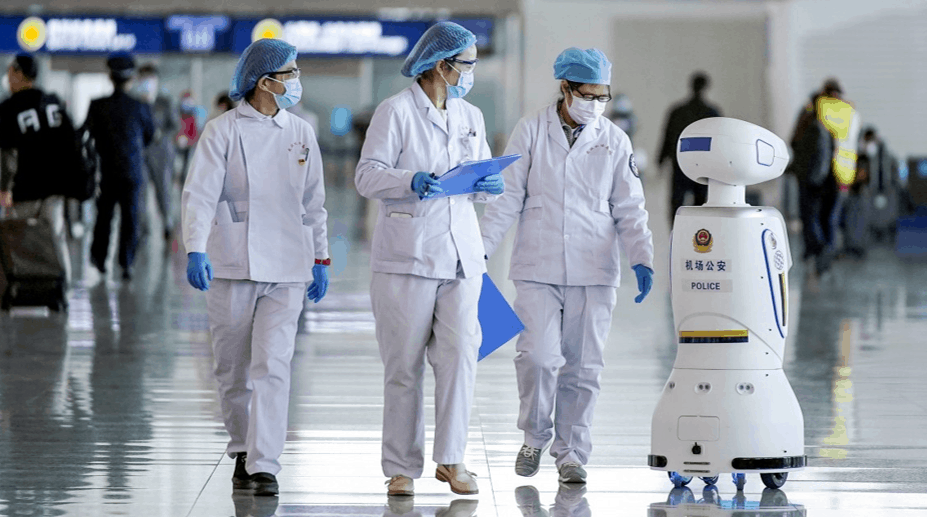 Technology has always been a double-edged sword for the humankind. As it, in one side, creates opportunities for innovation, on the other side, it reduces manpower. In the time of crisis caused by coronavirus, which erupted from China, technologies such as Artificial Intelligence, Robotics, and Drones, among others are playing a significant role. In other words, the pandemic has unrolled several ways for tech companies to prove their capabilities as they are already stepping out in the fight against the virus.

Many tech firms in China have developed automated technologies for contactless delivery, spraying disinfectants and performing basic diagnostic functions, in order to lower the risk of the spread of COVID-19. Shenzhen-based Pudu Technology, for instance, which builds robots for the catering industry, has reportedly deployed its machines in over 40 hospitals across the country to support medical staff.

Robots that are immune to the virus are providing telemedicine solutions, making it possible for medical professionals to communicate with patients remotely, saving time and enabling possibly contagious patients to stay confined. They are also taking over the disinfection work and expected to be deployed in factories and other public indoor spaces in different cities of China.

The country is also set to drive autonomous vehicles to the delivery of essentials. Recently, China has seen a partnership between UNIDO’s (United Nations Industrial Development Organization) Investment and Technology Promotion Office (ITPO) in Shanghai, and the Beijing-based White Rhino Auto company for unmanned vehicles to work at Wuhan’s Guanggu Field Hospital. Reportedly, two unmanned vehicles were brought to Wuhan from Beijing and two engineers who set them up to transport medical supplies, deliver meals for doctors and patients, and complete other emergency tasks in the hospital.

Robots are also used to deliver essential items to people who shop online and are quarantined at home. To help those people, Meituan Dianping, a China-based consumer delivery app, for instance, ramped up their contactless delivery options through autonomous vehicles and robots.

Along with robotics technology, several companies are also providing drones solutions for a smooth medicine supply. MicroMultiCopter is one such company which has deployed a fleet of drones to transport medical samples and conduct thermal imaging. The company uses megaphone-equipped drones to patrol the streets and warn people who not wearing masks. The drones are also used as loudspeakers to broadcast announcements, and are capable of spraying disinfectants in public places and measuring individual thermal signatures, helping to minimize the spread of the virus.

One another company Aerodeli, in the end of 2019, received the first commercial drone delivery license from China. And in early 2020, the company has started using its technology for the safe transport of medical sample technology. As the use of drones is increasing rapidly, ensuring the safety of aerial disinfection operations, XAG Technology, DJI Agriculture, China Agricultural Machinery Distribution Association, China Agricultural University Research Centre for Medical Equipment and Application Technology and other relevant agencies have jointly published a series of operational guidance and technical specifications to communicate with local authorities and ensure that all efforts were conducted safely and scientifically.

Meanwhile, the use of artificial intelligence is also proving its capabilities and has been utilized to diagnose the disease and expedite the development of a vaccine. For instance, Chinese Internet giant Baidu has made its Lineatrfold algorithm available to teams that are fighting the outbreak. The company has also built tools to effectively screen large populations and an AI-enabled infrared system that can spot changes in a person’s body temperature. E-commerce giant Alibaba also developed an AI-powered diagnosis system and claimed that it can identify coronavirus infections with 96% accuracy.

China has also mobilized its sophisticated surveillance system to keep a tab on infected individuals and enforce quarantines. To this effort, the government partners with tech giants Alibaba and Tencent to develop a color-coded health rating system to track millions of people daily. According to reports, the smartphone app was first installed in Hangzhou in collaboration with Alibaba. The app assigns three colors to people, green, yellow and red, based on their travel and medical histories.

Moreover, access to public information has driven the creation of dashboards that are continuously monitoring the virus and facial recognition camera that identify an individual’s temperature. China’s leading AI-based firm SenseTime has come up with its contactless temperature detection software that has been deployed at underground stations, schools and community centers in Beijing, Shanghai and Shenzhen. Conversely, Hanwang Technology has also claimed to come up with a special facial recognition technology that can accurately detect people even if they are masked.

Comprehensively, as the threat of COVID-19 is continuously spreading without any vaccine being developed, social distancing, contactless transactions, cleaning and gathering diagnostic data and the use of such advanced technologies are the preventative measures available to contain the spread of the contagious virus.