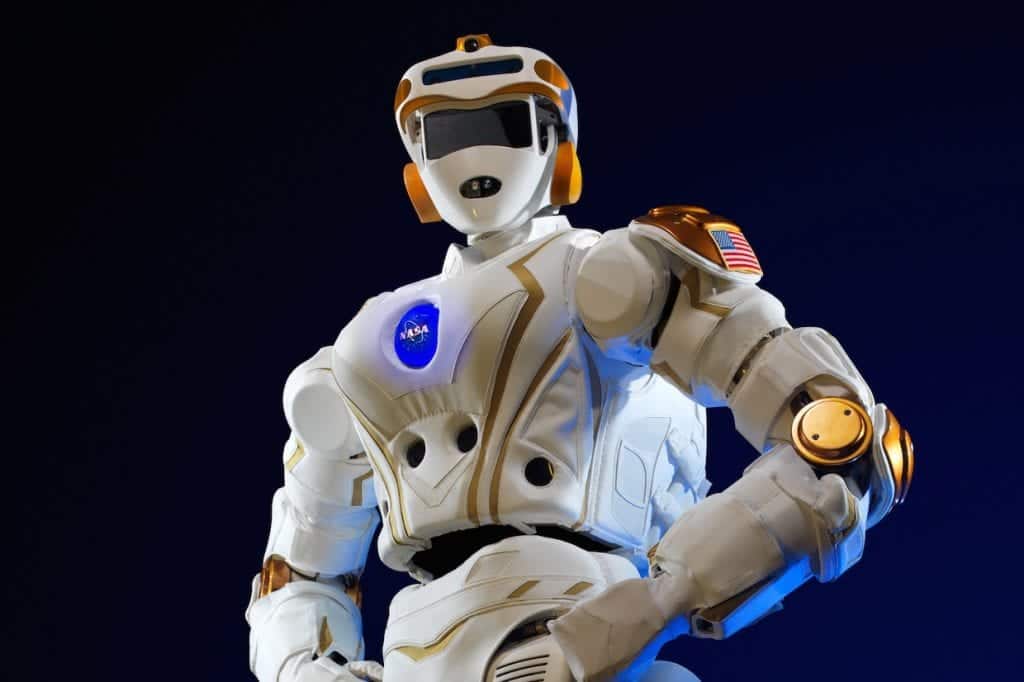 Not a couple of decades ago mankind were fascinated with the idea of Robots being their sidekick. After all it is generally the sidekick who executes the most important task while the protagonist is busy bragging about his heroic past. Let’s not forget C-3PO, R2-D2 who helped Luke on many occasions.

Currently, robots are doing the human equivalent of, or more work in various manufacturing industries. Due to their high uptime, the basic routine involves tasks that are of higher magnitude regarding volume, simplicity and repetitive in nature. However, looking through the glass reveals, robots being used for making high value, extremely larger parts that feature accuracy, flexibility and superior performance in the aerospace industries.

Unlike in Automotive industry that needs fewer formal processes, aerospace OEMs adhere to stricter standards (AS) and require higher precision and traceability. Hence, tasks like individual drilling, welding, etc. and making parts possessing a tolerance of microns are beyond the capabilities of humans. This is where robots come to rescue.

How do Robots help?

Given the plethora of activities carried out from manufacturing to overhaul, robots have most of the work covered.

•  A standard fuselage has over a thousand of holes. It is mandatory that these be done precisely, with high consistency, speed while performing drill (pilot hole and final), filling and reaming operations, all in a single pass.

•  Painting, coating, sealing normally require scaffolding, but due to the large work envelope of robotic arms and rails, this is done quite faster, and reduces the risk of coming in contact of toxic paints and fumes. E.g., ABB robots

•  Robots can do traditional convectional machining like turning, milling, grinding, pressing, etc. previously it is used to be done by different machines like a lathe machine, milling machine, press punch etc. E.g., FANUC

•  Robots can also be used for automated fiber placement of composite fuselages and wing covers. Here reinforced carbon fibers or plastic fiber of pre decided thickness and right orientation is stacked next to each other, and then impregnated with resin.

•  Now we have automated devices that are capable of quick change of tools. This automatic tool switch saves a lot of time and does not require mounting heavy parts every time for the same.

•  Inspection of aircraft parts for cracks and fatigue, de-lamination of composites, by using Non-Destructive Methods (NDT) of testing. It is also possible to measure the bore depth, hole diameter, surface characteristics using probes. Additionally, the invention of snake-arm robots (by OC Robotics) has made it possible to carry out an inspection in hazardous or restricted places. Two widely used versions are spatial snake-arm robots and planar snake-arm robots.

•  Usage of secondary and tertiary encoders cut the chances of a backlash error.

•  Fabric optimization, spreading and cutting is easier with negligible room for error. The Aquarese system can penetrate the layers of titanium and foam with equal accuracy.

•  It can do menial tasks like  packaging, palletizing and material handling. Furthermore, they help in payload handling, e.g., Staubli.

The Aerospace industry is famed for its rigidity and conventionality. The introduction of robotic automation has yielded staggering outcomes. Although it is still in a nascent stage, instead of being hung up on the stalement from its automotive twin; it is high time it embraces the opportunity of synthesizing an environment wherein robotics in collaboration with AI and machine learning as a solution to complex calibrated, ergonomic, repetitive challenges prevalent in this sphere. After all Robots these days can function more than a sidekick: partner.

5 Benefits of Business Analytics for the Construction Business

What Are the Main Problems of EU’s Recently Issued AI Strategy?