Report: Top 10 Technology Acquisitions of 2019 and Their Significance 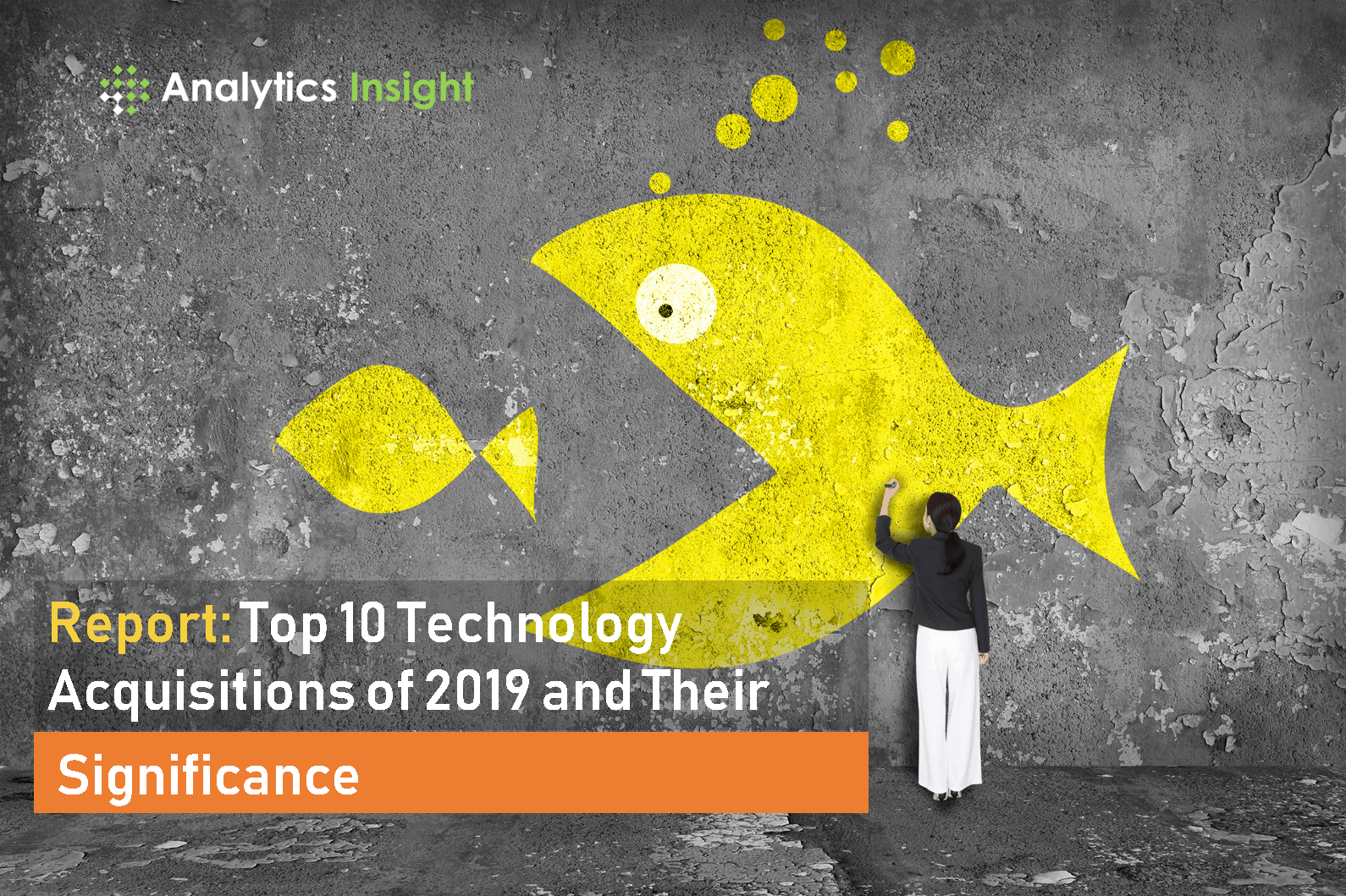 The significance of technology in driving efficient business has become more dramatic in recent years. To deal with the competitive edge of the industry, technology management is needed to attain in order to maintain the position and performance of the firm.

Acquisitions play an essential role in business-technology management. It undoubtedly, influences the innovative performance, evaluation of an organization. There can be several factors motivating the will to acquire any business. These factors can be access to channel distribution, venture into a new market, gain financial synergies or attain entitlement of market power.

Extracting the essence of technological acquisition in recent times, here we have enlisted ‘Top 10 Technology Acquisitions of 2019’ along with their impact on the companies involved.

The UK-based software company Blue Prism has acquired Thoughtonomy, an intelligent automation-based company for up to $100 million.

The major idea behind the acquisition is that the startup will be aiding Blue Prism to get its RPA services to become more efficient and reach new levels of success. The company will add architectural support, intelligence, better understanding, and interpretation in order to expand use cases for Blue Prism’s RPA above structure processes.

The acquisition of Thoughtonomy will supports a broader strategy to fortify Blue Prism’s portfolio with cloud offerings for delivering value and enhancing the customer experience.

Other than RPA, the deal brings together other capabilities of both the firms including a variety of embedded intelligence, coding quality, and efficient tools. Thoughtonomy is also expected to boost the client count of Blue Prism to accelerate its performance in different industry verticals. Additionally, the startup with its cloud orchestration tools, resources, and skills, will feed into better productivity in Blue Prism’s product initiatives.

This deal is considered to be quite huge for Salesforce in order to move ahead of CRM software and delve deep into data analytics. The deal will support the company in extending its engagement and data intelligence for the current users. The deal is bringing market leaders of CRM and Analytics platform, together. While Tableau will aid customers to see and understand data, Salesforce will drive engagements and understanding of the customers.

Additionally, joining hands with Salesforce will accelerate the abilities of Tableau to expand its reach and make them understand data better. The company’s strengthened analytics will allow millions of people to decipher insights for the betterment of their organizations.

The combination of Google Cloud and Looker will enable customers to harness data in new ways to drive their digital transformation. Google remains committed to its multi-cloud strategy and will retain and expand Looker’s capabilities to analyze data across Clouds.

As the deal between Google and Looker represents Google CEO Thomas Kurian’s first cloud acquisition since he replaced Diane Greene in last November, it’s also the latest move in a line of recent cloud announcements by Google that is aimed at helping the search engine platform to draw near with public cloud market leader, AWS.

High-performance computing is the main aim of HPE’s growth strategy through acquisition. The company currently offers world-class HPC solutions which will be further fortified by leveraging Cray’s technologies and adding complementary solutions. Both the companies together will also approach the broader set of end markets while offering enterprise, academic and government customers a broad range of solutions. HPE and Cray, together, can enhance the integrated platform, scale, and resources to excel in the Exascale era of high-performance computing while determining the growth.

Both the companies expect the amalgamation to lift up significant revenue growth opportunities by capitalizing on the growing HPC segment of the market, enhancing HPE’s customer base with a complementary footprint in federal business and academia and introducing new offerings in AI / ML.

Uber has acquired its Middle Eastern rival for $3.1 billion, consisting of $1.7 billion in convertible notes and $1.4 billion in cash. The deal is subject to regulatory approvals and is expected to close by Q1 2020.

With its proven ability to develop innovative solutions, Careem will help Uber continue to expand its platform around the world. Uber along with the help of Careem will deliver exceptional outcomes for riders, drivers, and cities, in this fast-moving part of the world. In return, Uber will support Careem to fulfill its purpose of improving the lives of people and constructing an inspiring organization.

In the regions accessible to the companies possess untapped mobility and broader internet opportunity with the potential to transform the regions for the digital future.

NVIDIA has purchased Israeli chip-maker Mellanox for $6.9 billion which is its largest acquisition till date.

NVIDIA witnessed a revenue fall of 22 percent last quarter due to the decline of Bitcoin mining, tepid sales of its latest GPUS and trade problems in China. With the acquisition of Mellanox, Nvidia expects to expand in bright spots including AI and cloud computing. These spots are the junction where it’s used for autonomous vehicles, robots, and neural networks.

Due to emerging competition, the workloads in such areas are accelerating exponentially, but CPU performance keeps slowing down. This compelled Nvidia to join hands with Mellanox.

Google had announced that it plans to acquire Alooma. Alooma enables enterprises to combine all of their data sources into services like Google’s BigQuery, Amazon’s Redshift, Snowflake, and Azure.

The addition of Alooma will allow Google to offer customers a streamlined, automated migration experience to Google Cloud while giving them access to its full range of database services.

Reportedly, Alooma had raised about $15 million, including an $11.2 million Series A round led by Lightspeed Venture Partners and Sequoia Capital in early 2016, before this acquisition.

Both Google and Alooma neither disclosed the price of the acquisition nor briefed much about what will happen to the existing products and customers.

With the combination of Demisto and Palo Alto’s existing threat prevention and response capabilities, the blend will be well-positioned to deal with challenges facing teams in security operations centers presently.

Demisto products will continue to be available to customers and partners despite the integration of Demisto into Cortex which would bring stronger automation and artificial intelligence capabilities Palo Alto.

Microsoft has recently acquired Citus Data which is a company that focuses on making PostgreSQL databases faster and more scalable, in January 2019.

Microsoft wishes to work with the Citus Data team in order to accelerate the delivery of key, enterprise-ready features from Azure to PostgreSQL. The acceleration will enable critical PostgreSQL workloads to run on Azure with confidence. The team at Microsoft confirmed to stay focused on building an amazing database on top of PostgreSQL providing its users with game-changing scale, performance, and resilience they need. With the support of Citus Data, Microsoft will continue to drive innovation in this very genre.

The social media giant made a big move into blockchain technology in February this year by acquiring blockchain startup Chainspace.

Facebook had publicly stated its interest in blockchain technology at several events especially in early May 2018 when FB Messenger head, David Marcus announced that the company has formed a group to explore the ways to best leverage blockchain across FB platform.

Reportedly, Facebook is aiming at building up transactions in cryptocurrency over WhatsApp platform and others.

Creating Trust Between AI and Humans

Top Data Analytics Trends That Will Rule in the Next Decade

Israeli AI Startup Hailo Expands Series A Round to $21 Million