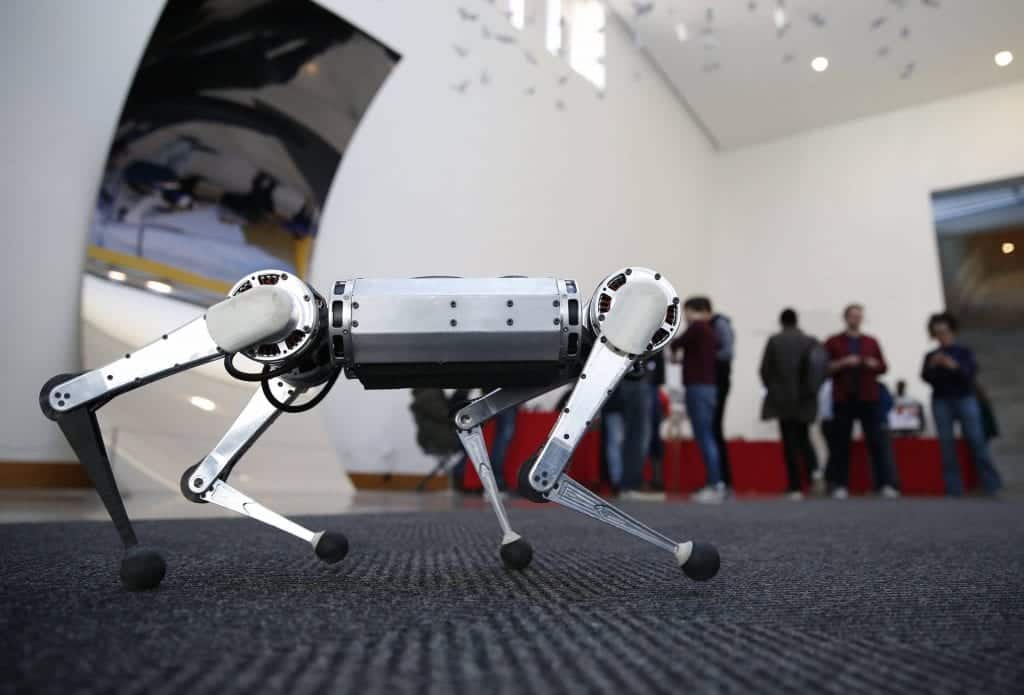 Biomimetics Robotics Department of MIT has recently conducted a group demonstration of its new ‘mini cheetah’ robot which displayed an adorable and impressive current state of robotics technology in action. Its production marks the commencement of innovative robot-machines production having ability of multitasking.

MIT’s new robot is springy and light on its feet. It possesses a range of motion that can give a tough fight to champion gymnasts. It is a four-legged powerful machine that can bend and swing its legs wide to walk with right-side up or upside down. It can also trot over uneven terrain two times faster than an average person’s walking speed.

It weighs around 20 pounds and when kicked to the ground, it can quickly right itself with a swift, kung-fu-like swing of its elbows. The most special quality of Mini Cheetah is its ability to perform a 360-degree backflip from standing position. According to the researchers, the machine is designed to be virtually indestructible having the capability to recover from little damage even if backflips end in failure.

The modularity in the design of the robot prevents it even if a limb or a motor breaks. Both the legs of the robot are powered by three identical, low-cost electric motors that have been engineered using off-the-shelf parts by MIT researchers. Therefore, each motor can easily be replaced for a new one.

According to the lead developer, Benjamin Katz who is a technical associate in the Department of Mechanical Engineering, MIT, people can put these parts together, almost like Legos.

Katz further added that “a big part of why we built this robot is that it makes it so easy to experiment and just try crazy things, because the robot is super robust and doesn’t break easily, and if it does break, it’s easy and not very expensive to fix.”

Mini Cheetah has been through a number of maneuvers. It was first tested for its running ability through the hallways of Pappalardo Lab, MIT and along the ground of Killian Court which is slightly uneven.

The team of researchers at MIT, wrote another code to instruct the robot to stretch and twist in the various yoga-like configuration. This showcased its range of motion and ability to rotate its limbs and joints while maintaining balance. It has also been programmed to recover from the unexpected force. For instance, when researchers kicked Mini Cheetah to the ground it automatically shut down.

In its recent demonstration, school students were seen coordinating the actions of 9 of the dog-sized robots running through a range of activities. These activities included coordinated movements, doing flips, springing in slow motion from under piles of fall leaves, and even playing soccer.

Notably, the mini cheetah is an improvised version of the Cheetah 3 which is much larger and more expensive to produce as a robot. Cheetah 3 is heavy-weighted on its feet, and not quite so customizable.

Therefore, the mini cheetah was designed with an ability to run at a speed of up to 5 miles per hour.

The researchers associated with mini cheetah robot set out to build a team for them post demonstrating its first version back in May. They are now working with other teams at MIT to loan them out for additional research and work.

Want to Opt out of Facial Recognition Screening at an Airport? Here is How

Interaction with Barrett W. Thomas, Head – Department of Management Sciences at The University of Iowa’s Tippie College of Business