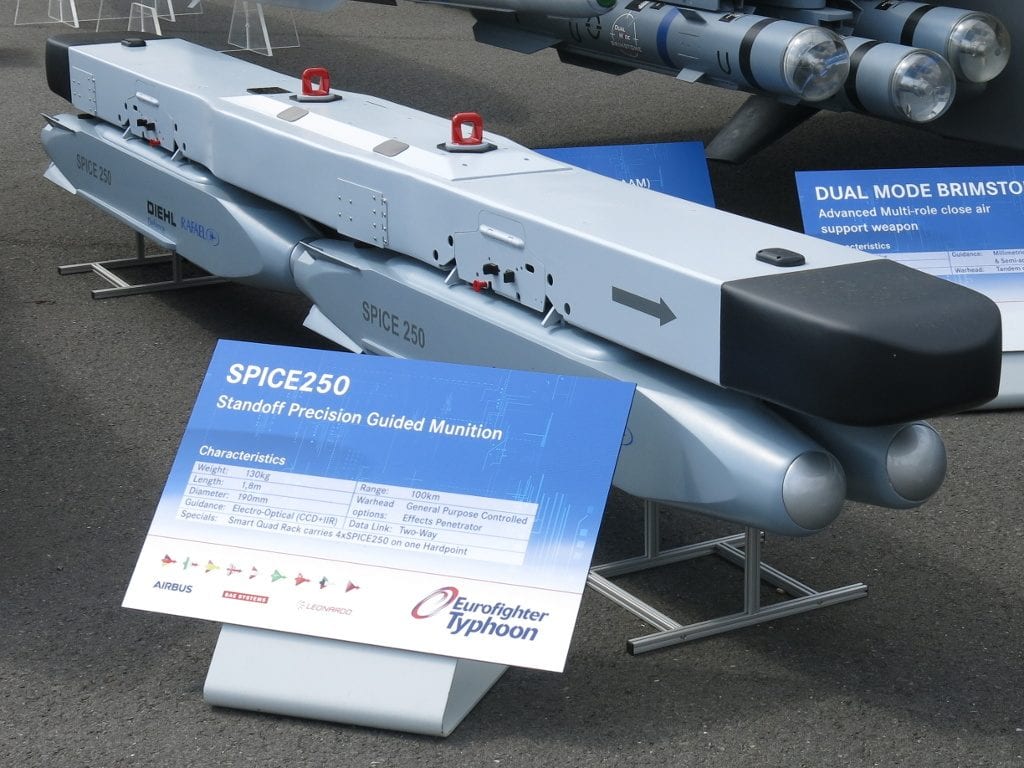 Rafael Advanced Defense System, an Israeli defense company, has successfully demonstrated a new automatic target recognition (ATR) capability to its latest variant of Spice bombs series, Spice 250, that relies on artificial intelligence and machine learning. The company enables Spice 250 with AI alongside ATR to be used with scene-matching technology.

Rafael’s newest Spice 250, which can be uploaded on quad racks under the wings of warplanes like the F-16, has a 75-kilogram warhead and a maximum range of 100 kilometers with its deployable wings.

The statement from the company explains that the SPICE-250’s new automatic target recognition capability “is a technological breakthrough, enabling SPICE-250 to effectively learn the specific target characteristics ahead of the strike, using advanced AI and deep-learning technologies”. The new ATR capability in Spice 250 involves the capability to strike moving targets.

The small size of the SPICE-250, which can be armed with general-purpose or penetration warheads, enables multiple weapons to be carried into a single fighter aircraft, significantly increasing versatility. The small warhead size also lessens collateral mutilations. According to Rafael that claims, a single F-16 fighter can carry up to 16 SPICE-250 bombs.

Its electro-optic scene-matching technology, that encompasses uploading terrain data onto the bomb and integrating it with real-time electro-optic imagery, allows the weapon to work in GPS-denied environments. And the bomb can leverage this autonomous capability to navigate and correct its location, according to Rafael’s deputy general manager of marketing and business development at the company’s air and C4I division, Gideon Weiss.

As it relies on AI and deep learning technologies, the Spice 250 has the potential to spot moving ground targets and extricate them from other objects and terrain. Its performance is based on 3D models uploaded to the bomb along with algorithms. Since the weapons recognize and focus attention on its target, it has learned to separate an object from others and has learned to avoid other substances.

According to Weiss, the company has completed the development and testing phase of its Spice 250, including flight tests, which have proven the robustness of the ATA and ATR, so it is mature for delivery.

On ATR algorithm’s capability in selecting a secondary target if the computer cannot find the initial human-opted target, Weiss comments, “This goes into the area of user-defined policies and rules of engagement, and it is up to the users to decide on how to apply the weapon, when and where to use it, and how to define target recognition probabilities and its eventuality.”

Though, according to him, automatically selecting a secondary target may eventually become part of the upgraded profile for the munition, if customers express significant interest in the feature.

In addition, Weiss explains that with a two-way data link and a video-streaming capability, the bomb can be aborted or told to re-target up until a few seconds before the weapon hits its target.

That two-way data-link, enabled by the weapon’s mounting on a Smart Quad Rack (SQR), will allow future deep learning to be based on data extracted from earlier launches. The data that recorded will consist of either live-streaming video or a rupture of still images of the entire homing phase up until impact.

In Series of SPICE

As an ellipsis for smart, precise, impact and cost-effective, the SPICE weapons come in three variants, SPICE-2000, -1000 and -250. The SPICE-1000 and SPICE-2000 are essentially freehand bombs, which have been fitted with a sophisticated guidance system, including inertial navigation, electro-optical seeker and GPS.

Conversely, the SPICE-250 is a complete, adapted bomb system that can move smoothly to a range of approximately 100 kilometers. It weighs around 113 kilograms and it’s the latest variant of the SPICE family. The family of Spice weapons is operated by the Israeli Air Force and international customers.

In its recent international deal, the Indian Air Force, last week, signed an agreement with Rafael to purchase 100 SPICE-2000 bombs for around Rs 300 crore.

How AI-Based Conversational Analytics Changes The Landscape of Businesses?