How World’s Biggest Companies Use Robotics in Supply Chain 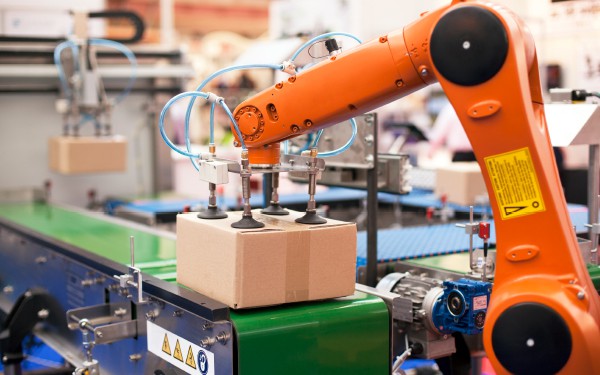 The robotic era of retail is defined by competitiveness and cost-cutting. Within the last year and a half, we have seen Macy announce layoffs and store closings, Sears pulling the shutters down on more than 150 stores and mall sales witnessing an overall decline. But with the advent of humanoid robots, shipping and retail in terms of logistics and in-store management is all set to change for the better.

In today’s fight for prices and better profit margins, retail giants investing in robots is no more a surprise in order for them to remain relevant and competitive. For instance, Amazon, one of the largest disruptors in the retail space, has its warehouses full of robots to increase the speed and efficiency of the logistics operations – a key component of their disruptive power.

FedEx following the footsteps of Amazon, introduced its first robot early last year, which drew a digital three-dimensional map of the vast 630,000-square-foot freight depot, making it easier for workers to navigate and take irregular items across the depot. A few months later, three more robots – nicknamed Lucky, Dusty and Ned, arrived and made use of the 3-D maps to navigate on their own. Jefe and El Guapo joined somewhere around in March and these autonomous vehicles snaked across the hub in comparison to the tuggers with humans behind the wheel.

Mobile robots being deployed in a considerable number inside a FedEx hub shows how consumers’ e-commerce habits are transforming the retail and logistics sector. Robots are typically being used to improve customer experience and perform logistics related tasks while improving the operational efficiency of the company. Typical robot applications include:

•  In-store service robots: These help the customers locate goods they are searching for. Lowe introduced LoweBot in 2016 at its stores in San Francisco, which the customers operate by speaking to or using the touch feature to find items inside the store or ask customer service questions and other related information.

•  Inventory robots: Tracking shelf stock and grabbing products for the customers are the main functions of this kind of robots. Chloe, a result of the collaboration between Best Buy and Par Systems, is an automated machine to retrieve products from shelves. Customers use the touch screen to choose whatever product they want and Chloe’s robotic arm moves along shelves to get those products. Meanwhile, it tracks the shopping patterns which are analyzed and used to refresh inventory.

•  Delivery robots: These robots bring the store to the customer autonomously. Last year, New Zealand’s Domino chain made its first aerial delivery using a DRU (Domino’s Robotic Unit) drone. Since then it has been toying with the idea of introducing driverless vehicles combining the GPS data gathered by Domino’s over the years with an automated vehicle to make delivery rounds. This technology is still being developed and will need to have regulatory approvals before hitting the roads.

It was in 2012 that Kiva- a robotics company, was acquired by Amazon and since then many of the company’s robots have found their way into Amazon’s network of around 210 fulfillment and package sorting centers. Technologies being developed in other retail companies might be new but mirror a desire of wanting to compete with Amazon, which thanks to its six-year head start, has about 100,000 robots deployed across its 26 distribution centers in US, Japan, Canada and Europe and around 30 robotic arms built by outside companies.

Providing immediate access to product and inventory details, robots complement their human colleagues by enabling sales associates to be more nuanced in their interactions with the customers. But the main motive of the retail industry remains to thrive in the generally declining marketplace and make use of the robotic automation technology to increase productivity and improve profit margins.

Artificial Intelligence, Robotics Amongst Top Skillsets in Demand in Singapore