Here’s Why Smart IoT is Future 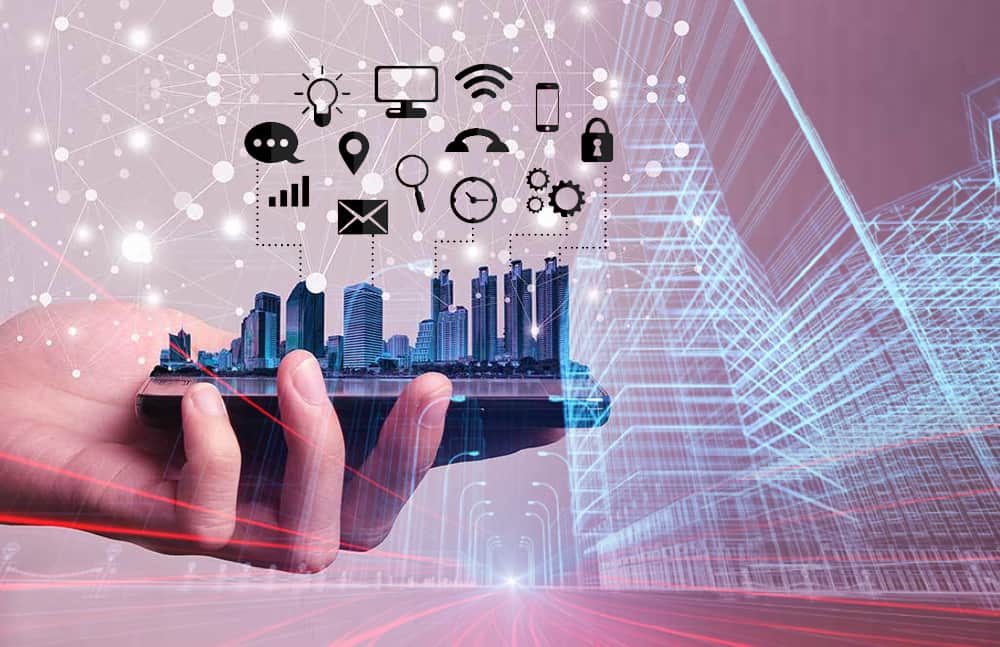 The term ‘connectivity’ is no more confined to laptops and smartphones, as we’re witnessing a transition towards smart cities, smart homes, smart retail, connected cars along with connected healthcare to name a few. In this arena where advanced technologies have been blooming at a tremendous rate, IoT is also catching up. IoT has been one such technology that is going to have an impact not only today but also in the coming future. The base for IoT is designed for storing and processing IoT data and is the core of all IoT-related devices and solutions. The base has been set in such a way that it provides an intake of huge volumes of data generated by sensors, user websites, applications and then accordingly initiates actions based on real-time responses and analytics. 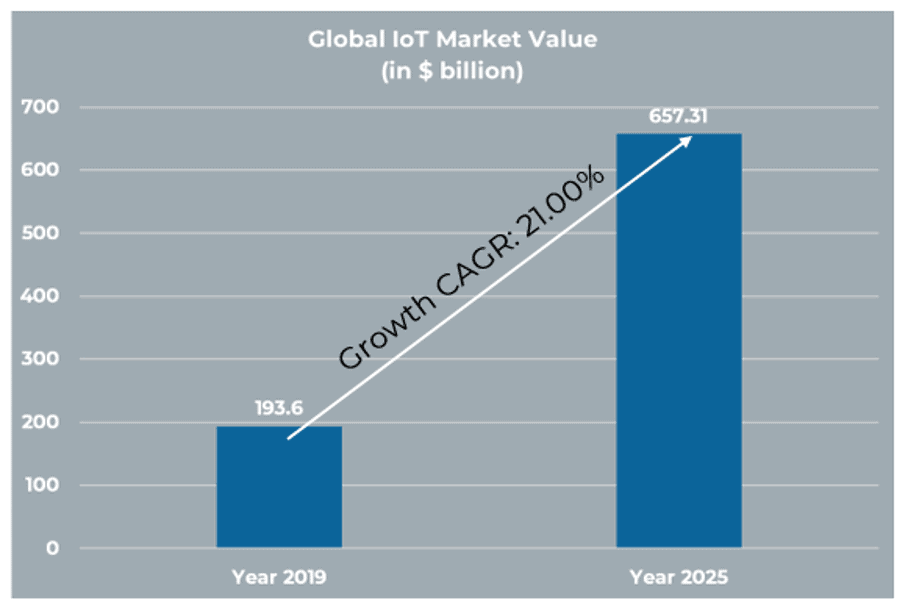 The tremendous growth of this technology can be credited to factors like- development of wireless networking methods, the emergence of advanced data analytics, reduction in the cost of connected devices along with an enhanced adoption of cloud platforms. 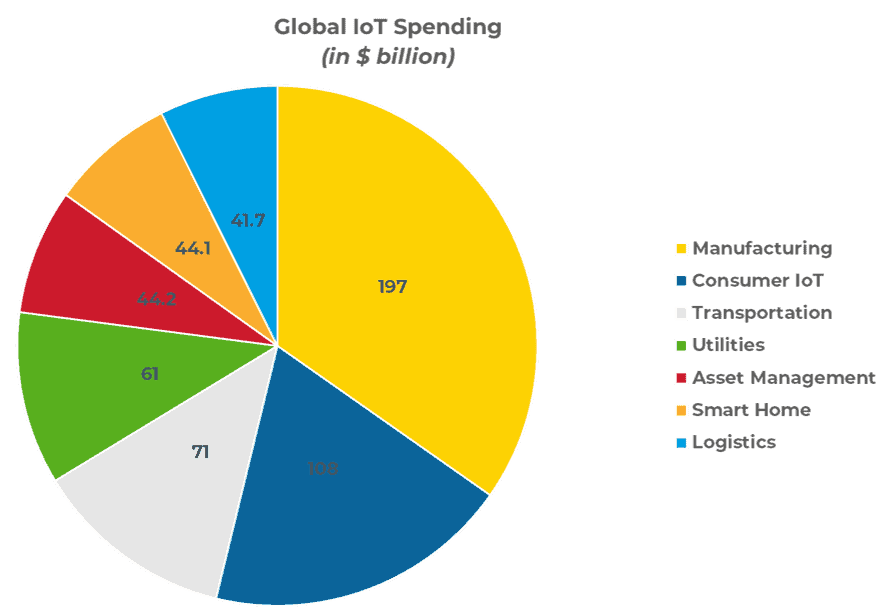 A report published by NASSCOM states that in the APAC (Asia-Pacific) region, India is going to be the front runner when it comes to the adoption of IoT technology. It is predicted that the Indian IoT market will be valued somewhere around $9 billion by 2020, emerging from $1.3 billion in 2016. In the stated growth period, the CAGR that would be recorded lies at 62%.

When it comes to the IoT connections, the same report states that by 2020, India is going to have 1900 million IoT connections rising from 60 million connections in 2016. The CAGR growth recorded during this period is tremendously huge, lying at 137%.

Besides these IoT solutions being deployed for smart cities along with their extensive usage in industries like- manufacturing, transportation, and automation. This will lead to enhanced demand for IoT applications in these industries. Another major factor that is driving the growth of IoT in Indian markets is that the number of tech-savvy customers has increased significantly in the past decade and so, owing to factors like increased number of smartphones along with Internet penetration that has taken place in India. 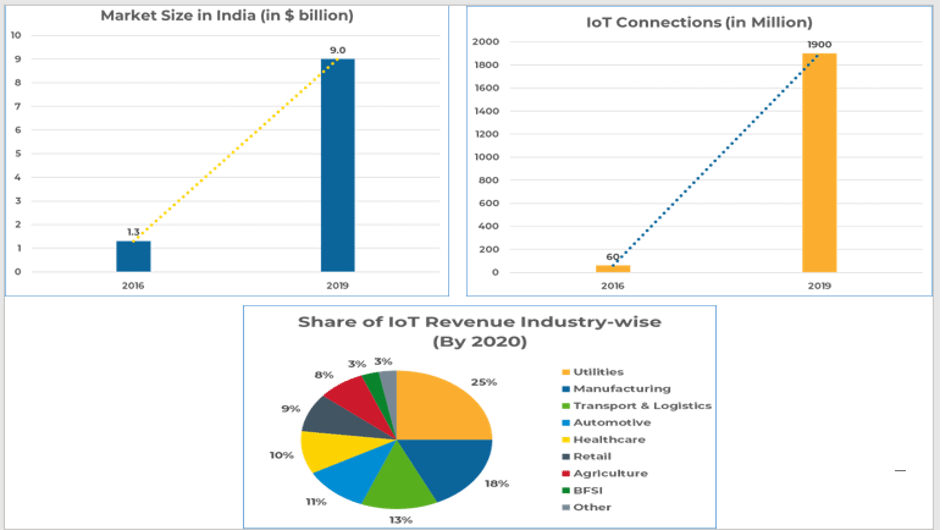 Following are some real-world applications of IoT-Cloud platform-

Just imagine your electric applications turn off by themselves as soon as you leave the premise. It would be a nice experience, isn’t it? IoT has been nurturing so rapidly with all the modern-day smart devices connected to each other and monitored by users from a distance using voice commands. With this rapid growth of IoT, it is predicted that Smart Homes is sooner going to be the reality when clubbed with smartphones. Smart homes along with the devices and the data can be stored on the Cloud to analyze patterns related to the consumption of electric applications.

In 2019, the smart wearable market was valued at 216.18 million units, with an estimate to reach 614.31 million by 2025. So, you can just imagine how fast this market segment is growing. All these wearable devices have sensors and software installed in them which helps in collecting data and information of their users. This data is then processed to extract out useful insights of the user. When it comes to IoT technology, the prerequisite remains to be highly energy-efficient, consuming low power and compact-sized. The productivity of data processing is going to be achieved by the means of various wearable technologies present around us. These can be in the form of smart wristwatches, smart glasses to name a few.

It is estimated that the Global connected vehicle market is going to be valued at $212.7 billion by 2027, emerging from $42,6 billion in 2019. In the same forecasted period (2019-2027), it is forecasted that this market will grow at a CAGR of 22.3%. The underlying concept of a connected vehicle is that it gathers, analyzes, stores and takes reasonable actions based on data generated from vehicle sensors. IoT in automobiles is a vehicle-to-cloud (V2C) based offering enabling awareness of the environment besides the vehicles that can be useful for providing information and establishing relationships with the driver also.

Industrial Internet of Things (IIoT) has provided industrial engineering systems with sensors, software along with big data analytics for building intelligent equipment. Smart machines are being developed with high precision and consistency than their human counterparts when it comes to transmitting data. These data analytics helps companies to resolve their shortcomings and solve their problems faster. It is estimated that the global IIoT market is going to be valued at $751.3 billion by the year 2023. IIoT has been witnessing tremendous growth in the past few years owing to factors like the emergence of Cloud Computing along with IoT.

It is needless to say that IoT technology has been driving the growth of smart cities across the world. It holds the potential of solving major issues of cities like pollution, traffic congestion, etc. IoT is going to boost the smart cities with their networks for offering an advanced set of applications for citizens, initiating new sustainability schemes and creating first-hand growth opportunities for the development of enterprises in smart cities. Smart cities have been using IoT devices like- connected sensors, lights, and meters for collecting and analyzing data. This gathered data is then analyzed for improving infrastructure, public utilities, and key services as well.

Well, these are only some use-cases that have been tapped by cloud and IoT. In the near future, we will definitely see more advanced applications emerging across different industry verticals. The adoption of the cloud has been quite significant over the years backed by growth in the IoT market. So, we can definitely say, that yes, the future belongs to the Smart IoT along with the Cloud technology.

Being Customer-Centric: Five Major AI and ML Trends for 2020

How Artificial Intelligence Can be a Great Storyteller