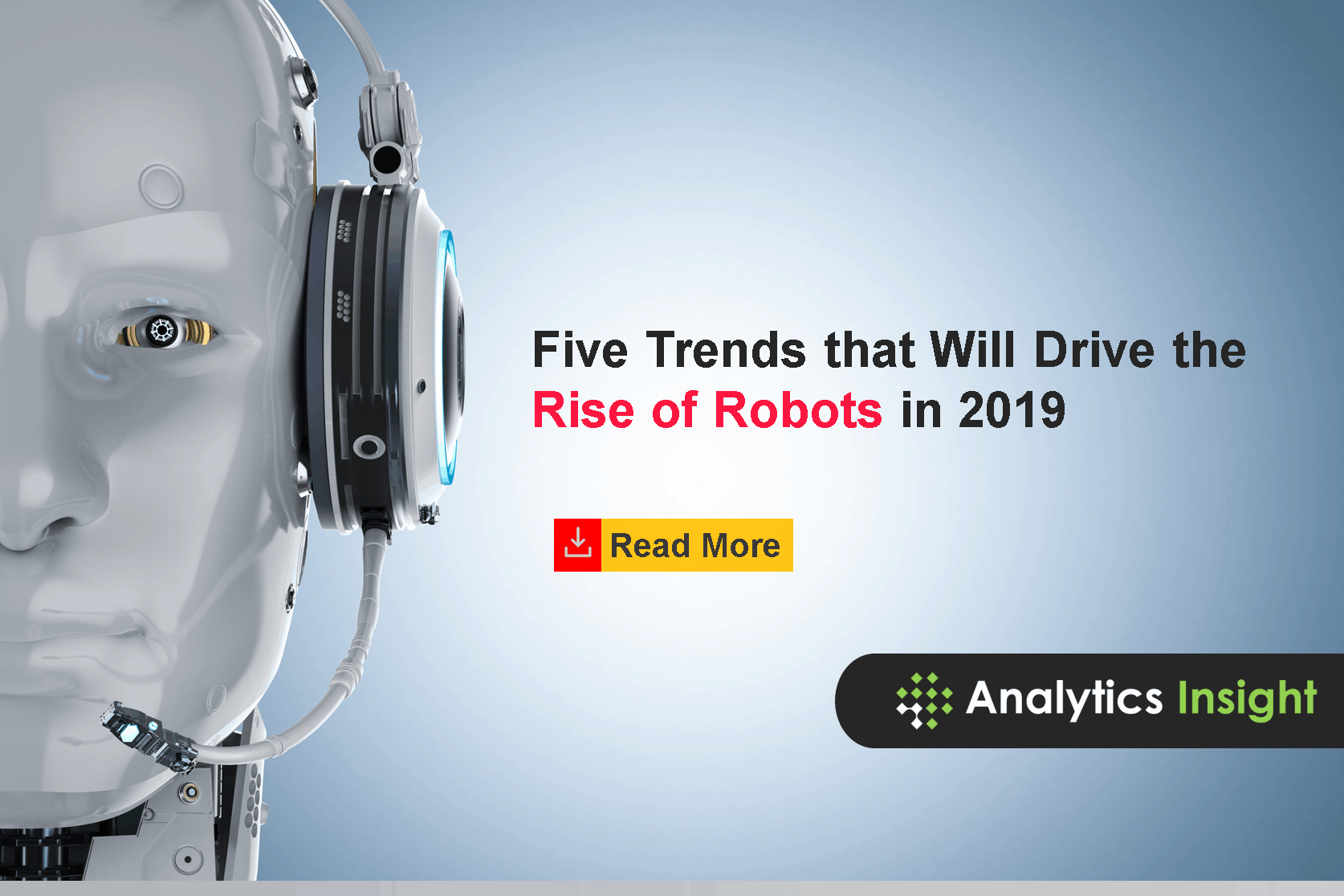 Industrial automation has entered into a golden era of adoption and technological advancement, with consumer robotics taking the next level of growth indicators. The coming year promises to hold greater rewards for the Robotics sector with disruptive technologies and upgrades. Here are the five trends that will drive the Rise of Robots in 2019.

The Age of Cloud Robotics

Industry leaders point that 2019 will be a crucial year when cloud robotics becomes a vital component to industrial automations. It has been eight years since the concept of cloud robotics has been into the industry but the interest towards this stream is recent with Google and Amazon announcing new services aimed at cloud-based development, and/or management of robot applications and deployment efficiencies.

The advantages of connecting robots to the cloud bring increased computational power, storage, and effective communications, to name a few. Cloud connected robots are able to communicate with each other seamlessly in operations teams across environments. 2018 is often doubted as the year of the cloud as robotic companies have been at the forefront of cloud adoption and the benefits of a cloud-first approach is increasingly been felt.

There is a growing international competition in this sector. With an intensifying global race for leadership in automation, as Europe, Asia, and North America join the race and vie for market share.

China in particular is running high on track to heavily influence the market as both a buyer and seller. According to Carl Vause, CEO of Soft Robotics China has bought more than half of all robots sold in the first half of 2018 and there are no signs of slowing down.

The International Federation of Robots has predicted there would be a massive increase of 1.8 million industrial robots in China by 2025, which is a tenfold increase over the current estimates. But the biggest impact on the industry is not the number units China purchases, but the number it manufactures at home.

The Made in China Plan

The Made in China 2025 plan, unveiled in 2015, asserts that China’s technology sector has been incentivized to satisfy the country’s domestic automation appetite through home-grown development with companies like Geek+ maker of logistics robots. Geek+ echoes China first instance, and just closed a $150 million Series B funding. Currently, China manufactures very few of its robots at home and according to the International Federation of Robots, by 2025, 70 percent of the industrial robots used in the country could be stamped with Made in China label.

The New Adopters are Here

Experts believe that 2019 will be a pivotal year for adoption as the industry is seeing a rapid adoption of industrial robots into new markets. Traditionally, the industrial robot market has been dominated by the automotive and electronics industries and over the past year, industry has seen a significant adoption and growth into the demand of robots into varied markets like food and beverage, warehousing, and logistics.

There is an increased debate about the concept of robots donning the role of perspective job killers and there is a need to prepare the workforce for the jobs of the future as automation becomes increasingly normalized across industries.

The consumer market has proven to be a tough nut to crack for robotics firms, and the last year has brought some abrupt company closures as well. Still, Gerkey from Open Robotics’ believes that in the year ahead, there may be some big progress in consumer robotics, with Anki’s release of Vector, continued development from PFF on Gita, and rumours of home robot projects at big tech companies. The industry seems to be getting closer to figuring out what a robot can usefully do for people in their everyday lives. Thus the scope for consumer robotics is here to stay.

Safety Still Continues to be a Challenge

There is a gold rush mentality in the automation sector right now, with new companies running to make their mark in the complex hardware to market. Underscoring all of these trends into the developments will eventually become a safety concern. This is true in an environment where compliance standards have not caught up which has made industry experts worried. The Industry believes that 2019 will be a year to recon into cloud robots as the ‘Era of Robots’ is knocking our doors.

When Global Banks Depend on Artificial Intelligence to Redefine Banking