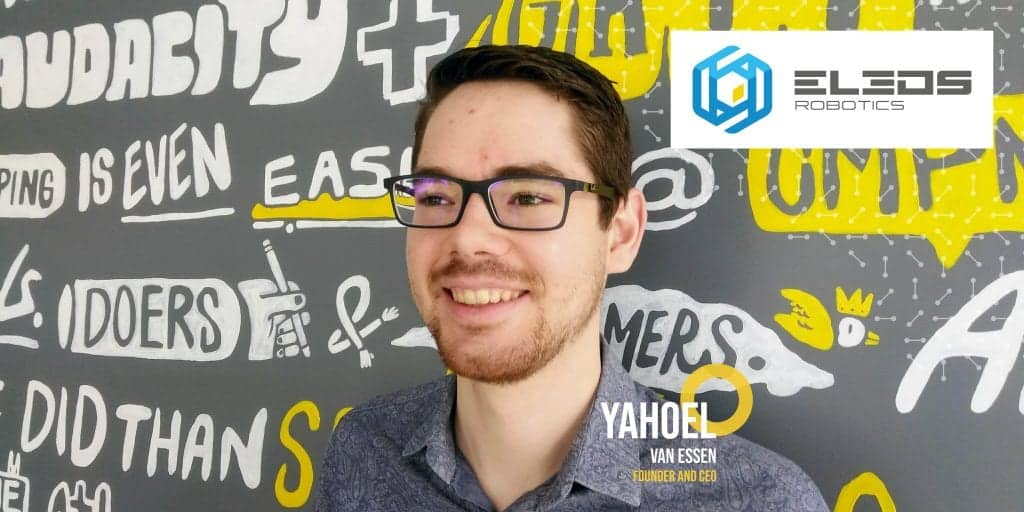 The advancements in technology are compelling businesses to adapt new innovative technological tools and solution to support exponential growth. In particular, the era of intelligent automation is bringing about a variety of changes in a business. The innovative paradigm of AI-driven solutions gives an edge to enterprises and adds value to it. Eleos Robotics is one such company which adapted to Intelligent Automation to revamp the way agricultural industry performs.

The company’s mission is to transform growers’ value chain with clean intelligent robotics allowing them to grow more healthy and sustainable food for a growing world population amid scarcity.

An Exemplary Leader and Innovator

Eleos’ Founder, Yahoel Van Essen is a serial entrepreneur and a problem solver. He is hopeful of a prosperous future made possible by technological ingenuity, and resourcefulness. He was seeking a sustainable, clean alternative to controlling pests on the farm after being exposed to the negative operational headaches of current pest control methods and the environmental, economic, and societal effects of pesticides. Being tech-savvy, Yahoel envisioned a robot that could control pests for the grower using artificial intelligence, robotics, and other emerging technologies. This eventually led to the innovative UGV farm robot and precision microwave technology that has become the backbone of Eleos’ RoboWeeder.

A lot of “techs” have been dreaming of building robots ever since Sci-Fi’s begun to Hollywood. For most, that is about as far as it goes, a dream. Yahoel Van Essen’s greatest gift is to envision something and bring it to conception.

Yahoel founded Eleos in 2016 intending to transform agriculture. His biggest contribution is pioneering the introduction of robots that are a fully closed loop, unsupervised, and autonomous. He went as far to even create an autonomous charging mechanism for Eleos’ RoboWeeder. Less explicitly, the work he is spearheading in robotics and artificial intelligence is spurring on other tech entrepreneurs to take up their dreams as well. He believes his ingenuity is a God-given ability.

Eleos Robotics is building on the ceiling of the current state of cutting-edge computer vision technology. The company is developing vision technologies capable of detecting and identifying weeds and crops in daytime and night time and then precisely localizing the harmful weeds based on multi-spectral vision, LIDAR, and 3D modeling technologies. Unlike other narrower applications for machine learning, Eleos is using these technologies to traverse a robot seamlessly on the farm so it can achieve physical farming applications. This manifests in a robot that traverses the farm, detects weeds, and eliminates them using patent-pending precision heating technology.

Moreover, Eleos Robotics utilizes advanced analytics to accelerate its machine learning by bypassing the human element when it comes to categorizing its raw data. Eleos has the ability now to process huge quantities of data that previously required expensive hardware, software, and labor hours. While it put to use its computer vision algorithms, the company also used the technology to improve growers’ awareness of crop health and foresight. Through data analysis, the grower can determine the optimal times to supplement with targeted pesticides, prepare for peak weed seasons, monitor invasive plants and much more. This reduces the impact upon the environment, improves crop health, saves time and reducing costs significantly.

According to Yahoel, crops are not able to reach their potential (yield) because of competition from weed pests. This causes thousands or even millions of dollars in crop loss for the grower each year. A non-organic grower’s current way of weed control is to apply herbicide, and the organic grower’s is to hoe or pull the weeds. However, these methods are extremely laborious, time-consuming, and expensive. To make things worse, North America and Europe are experiencing an agricultural labor crisis. Therefore, growers must import seasonal labor workers in high demand. Moreover, herbicides are being boycotted by consumers, and are already banned in certain countries for their detrimental effects on public health.

Eleos’ RoboWeeder detects, identifies, and then eliminates weeds that destroy growers’ crops. It autonomously patrols crops searching for weeds, and then eliminates them with a high-precision directed microwave. This creates a “weed-free zone”. It even self-charges and can, therefore, operate day and night without supervision.

Eleos’ RoboWeeder is one of the most disruptive weeding technologies to herbicides and is patent-pending worldwide. It eliminates weeds by heating them. It destroys their cells, dehydrates them, and creates a lethal thermal shock.

RoboWeeder reduces labor and makes herbicides obsolete. Unlike pulling or hoeing weeds, it is autonomous, and unlike herbicides it is eco-friendly.

Eleos Robotics has raised over $175k through clean tech grants to build a proof-of-concept prototype(s) and conducted experimental work. Eleos has a 41-grower pre-sale waitlist and 15 letters of intent to purchase.

The company has some large partnership opportunities pending. Eleos recently closed an RTO deal to go public on the CSE and already has over half their $1.5 million private placement subscribed. Around $1 million of these funds will be used to build their commercial prototype and to launch it in 2019.

Last year Eleos Robotics was placed third in a global agri-tech challenge focused in France called Agri-N.E.S.T., and again this year the company was a finalist in the Agro-Innovation Lab (BayWa/RWA Group) Robotics Challenge.

Eleos is quickly becoming one of the top agricultural robotics startups globally.

Traditionally, private equity investors have conventionally viewed agri-tech as niche and the agriculture sector in general as low-tech. A lot of the attention was focussed on SAAS and blockchain startups as they were hoping for another software unicorn. Though now, agri-tech is one of the fastest-growing sectors in terms of venture capital. In earlier years, this made it difficult to raise funds to build new technologies as primarily specialized investors were needed. But, Eleos made it through the chasm and is attracting a lot of equity capital making the launch of its commercial RoboWeeder a reality.

Right now, Eleos is working on industrializing their weed killing AI robot and bringing it to market to satisfy its pent-up demand. However, the company has lofty plans for developing more disruptive technologies. First off all, Eleos plans to improve its plant recognition technologies so the RoboWeeder can work in harmony with biological controls on the farm, or in other words, its robots will become aware of its surroundings and more horticultural overtime.

Secondly, the company is going to expand its UGV robots’ applications on the farm using a modular approach. Then adapt that robotics to other operational environments. Currently, the RoboWeeder is optimized for an outdoor vineyard or berry farm. Eleos has other patent-pending agriculture robotics technologies in the pipeline that will be disruptive for other agricultural commodities. Some of these technologies are distinctive, and some based on its existing intellectual property. Eventually, Eleos will exploit the synergies that exist amongst the artificial intelligence, data systems, and robotics platforms developed. The company will use the experience and overlap to eventually disrupt other sectors as well as agriculture. Eleos will become a collective of the world’s most advanced robots that even spans numerous industries.

Interview with Kevin M. Purcell, Associate Professor of Data Science and the Program Lead for Graduate Analytics at Harrisburg University