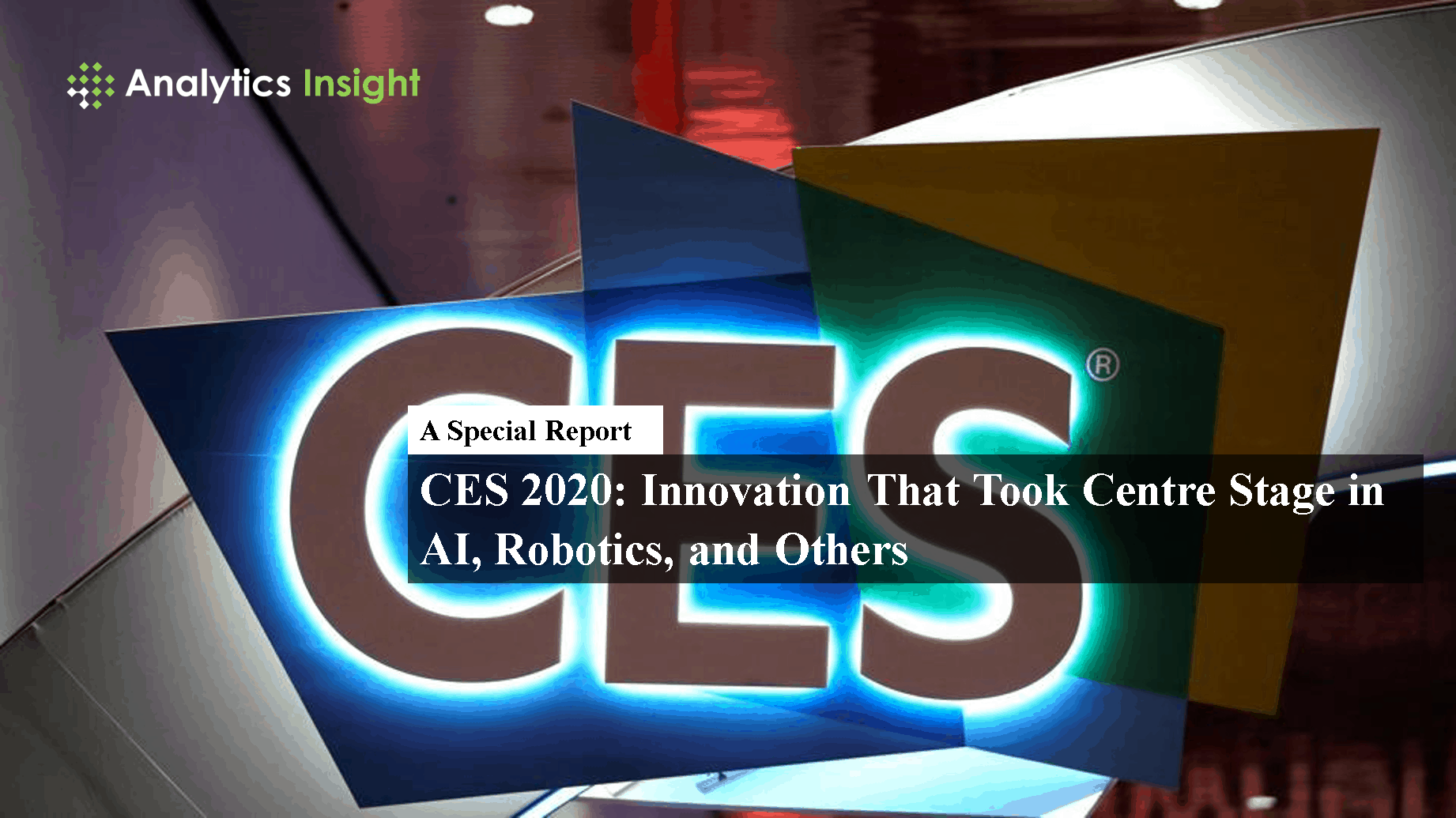 The global stage for innovation again created a stir in technology-industry this year. The Consumer Electronic Show or CES 2020 was nothing like a usual show off of technologies rather the event went to whole another level with several innovative tech-companies’ participation. From Samsung to Hyundai, the Las Vegas event narrated the ode of new age innovations in Artificial Intelligence (AI), Robotics, Drones Technology, Autonomous Vehicle and Smart City prototypes, that are about to hit the market soon and will potentially become a fashionable yet essential part of our lives.

All those who thrive on the business of consumer technologies has served with unusual and breakthrough creations to locate where next-generation innovations lie.

Here is a list of 15 never-seen before ideas and machines which took center stage at CES 2020.

Take a sneak peek to the future through CES 2020 window!

BrainCo has unveiled a new AI-powered prosthetic hand that works with an amputee’s brain waves and muscle signals. The invention has been named as one of Time Magazine’s top 100 inventions of 2019 — at CES 2020. The company expects commercial launch of this hand in the US market later this year.

Max Newlon, president of BrainCo USA, told CNET, “We came up with a new way to understand electrical signals coming from the brain, going into the residual limb of the amputee, and detecting the intention of the user.”

Ballie
Samsung, at CES 2020, introduced its vision of robots as ‘life companions.’ The company rolled out a tiny, ball-shaped AI device that rolls around the house and responds to commands like a pet dog. It is designed to act as a personal assistant for the home.

The AI device employs a mobile interface, on-device artificial intelligence (AI) capabilities, voice activation and an in-built camera to identify and respond to its users, and assist them with various household tasks.

Samsung along with Star Labs, unveiled its another innovative technology known as Neon. The company describes it as “a computationally created virtual being that looks and behaves like a real human, with the ability to show emotions and intelligence.”

According to the company, “Neons are not AI assistants. Neons are more like us, an independent but virtual living being, who can show emotions and learn from experiences. Unlike AI assistants, Neons do not know it all, and they are not an interface to the internet to ask for weather updates or to play your favorite music.”

LG has released some of the details for its 2020 lineup of soundbars with biggest new feature of AI Room Calibration. It is a system that automatically adjusts the sonic properties of LG’s premium soundbar models to better match the acoustics of the room.

As noted by Digital Trends, LG said in its press release that, “These advanced models are self-calibrating, able to recognize and analyze tones to accurately assess the dimensions of a given space and adjust accordingly.” Moreover, the benefits of this system are particularly noteworthy when playing content mastered with Dolby Atmos or DTS:X.

According to Intel, “The American Red Cross, its Missing Maps project and Intel are using artificial intelligence (AI) to map vulnerable populations in developing nations to aid with disaster preparedness. Throughout 2019, Intel data scientists built a computer vision model that can identify previously unmapped bridges and roads on satellite images from Uganda.”

The AI model augments mappers’ abilities to cover more ground and can catch things that may be difficult for the human eye to find. For example, the model found 70 bridges in southern Uganda that had been missed in either OpenStreetMap or the official Ugandan Bureau of Statistics map, says Intel.

At CES 2020, Bic announced its collaborative platform the company plans to use to foster innovation and creative products. One of these collaborative efforts is with Invoxia and it is something surprising: A connected razor, notes Digital Trends.

According to Eric Carreel, the co-founder of Invoxia, “By using a smart device that collects useful data, we can better understand just about anyone’s bats and provide instant and personalized feedback.” Moreover, the AI could help adjust the speed of the razor to better match the density of the hair on your face, for example.

Charmin has rolled out its Rollbot which is a cute little robot with a crucial job of getting you toilet paper when all hope is lost. It is a self-balancing robot which rolls around on a pair of wheels while carrying the all-important roll of toilet paper. You can connect this robot with your smartphone via Bluetooth. This does create some limitations, primarily that you’ll need to have your phone with you and it will need to be within 30 feet since it uses Bluetooth instead of Wi-Fi to communicate.

The gadget is part of GoLab, one of the latest marketing innovations commissioned by Charmin, the P&G-owned toilet paper and tissue brand.

Across the Samsung’s CES 2020 booth, the visitors discovered Bot Chef which is a pair of robotic arms that cook salad on command. The bot chef can rummage through cabinets, pour ingredients into a pan, and mix them up to create a tofu salad, using AI and computer vision algorithms.

As noted by Tech Radar, “In many ways Bot Chef felt like the most futuristic technology on show at the Samsung CES 2020 booth, despite being situated among the company’s screen-based 5G phones, 8K QLED TVs, giant Wall TVs and rotating Sero displays.”

Delta Air Lines Inc. demonstrated the Guardian XO industrial exoskeleton at CES 2020 in partnership with Sarcos Robotics. It is a battery-powered, full-body exoskeleton designed to boost human performance and endurance while helping to prevent injury, according to Sarcos.

As noted by the Robot Report, “This robotic suit does the heavy lifting for employees by bearing its own weight in addition to a payload. Guardian XO can enable a worker to lift up to 200 lb. repeatedly for up to eight hours at a time without strain or fatigue. Because the Guardian XO supports natural, fluid and intuitive movement, it requires relatively minimal operator training. A user can put on or take off the exoskeleton in just 30 seconds, said the company.”

Toyota announced its ‘Toyota Woven City’ smart city plan at CES 2020. It is an urban prototype for the near future which is the work of the Japanese car giant and Danish architecture firm BIG-Bjarke Ingels Group. The project proposes a fully connected ecosystem, powered by hydrogen fuel cells. This prototype city will act as a living laboratory for testing and advancing mobility ideas – autonomy, connectivity, alternative-powered infrastructures. As noted by Forbes, “this is much more than a conceptual idea. Starting next year, Toyota Woven City will be constructed on a 708,200 m2 site on the foothills of Mount Fuji in Japan.”
BIG’s founder, Bjarke Ingels said, “As a replicable framework, it can serve both as a prototype for future cities and as a retrofit to current cities. By simply ‘reprogramming’ existing streets, we can begin to reset the balance between people, mobility and nature in cities as diverse as Tokyo or New York, Copenhagen or Barcelona.”

The American multinational semiconductor company, Qualcomm revealed a new automotive platform called Snapdragon Ride which has been designed to power all levels of automated driving, from today’s active safety systems in passenger cars to future’s robotaxis.

The technology company ZF, which is concentrating on Level 2+ semi-automated systems that deliver advanced safety and convenience functions, has, along with its partners, developed the most affordable Level 2+ system in the industry. As noted by Auto Car Pro, ZF’s coASSIST is the first step into the modular Level 2+ hardware and software suite and highlights ZF’s capabilities as the full system supplier. From 2020, ZF says it will equip production vehicles with this new system for a major Asian OEM.

According to the company, this Level 2+ semi-automated driving systems is a pragmatic and feasible approach to help enhance safety and comfort in passenger cars. By combining an advanced sensor suite including cameras and radars with a central electronic control unit, functions such as adaptive cruise control, traffic sign recognition, lane change assist, lane keeping assist and traffic jam support are enabled.

At the 2020 Consumer Electronics Show (CES), Audi offered a look at tomorrow’s mobility – and is already integrating future technology into its current products. At Las Vegas even, Audi presented the Audi AI:ME as a personal mobility partner with an empathetic Audi Intelligence Experience technology.
The Audi AI:ME is part of the family of concept cars that was launched in 2017. Each of the four vision vehicles with electric drive is tailored specially to its clearly defined area of use: The Audi AI:CON for long-distance driving, the AI:RACE for the race track, and the AI:TRAIL for all-terrain driving.

CES 2020 has introduced the world with new kind of home security system including drones to patrol people’s property, along with sensors designed to mimic garden light and a central processor to bring it all together.

Sunflower Labs debuted their new Sunflower Home Awareness System, which includes the Bee which is a fully autonomous drone that deploys and flies on its own. It has cameras on board to live-stream video. It has been designed to supplement more traditional passive monitoring, and can be deployed on demand to provide more detailed information and live views.

Uber and Hyundai unveiled a flying taxi, for transforming ridesharing trips, at the Consumer Electronics Show in Las Vegas. The companies revealed a model of a four-seat, electric flying vehicle that, according to them, people will be able to summon for a ride through Uber’s app someday. As told by Hyundai’s spokesperson, the first actual prototype will be ready in 2023. The company further asserted that a human pilot will fly the air taxi until the companies finalize software to autonomously control it.

However, William Crossley, a Purdue University professor who researches aerospace design said, “It’s going to be a while. If things go well, it’s certainly plausible in the next 10 years.”