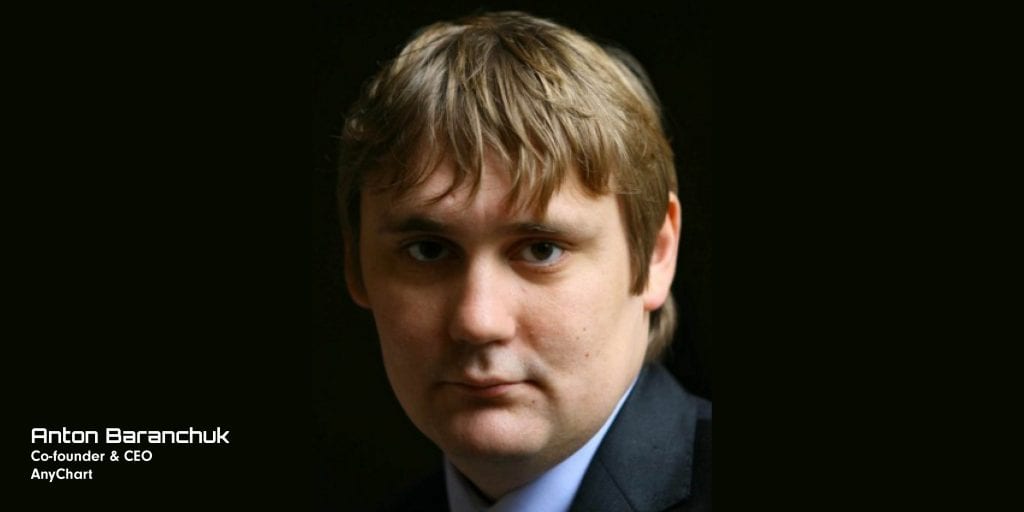 Founded in 2003, AnyChart is a global leader in interactive data visualization. The company’s charting solutions have benefitted numerous companies while enabling them to increase revenues, reduce operational costs, and better serve their customers. As appropriate data visualization catalyzes the transformation of operational data into actionable information, thousands of business users across the world today rely on AnyChart.

While there are multiple data visualization tools that cat fit narrow usage, enterprise information systems are a somewhat different story. In fact, there can be diverse situations in terms of data when it comes to corporate reporting, analytics, and business intelligence (BI) applications. Numerous different sources, formats and questions that enterprise analysts want their data to answer make it too difficult to develop versatile tools from scratch. But that’s exactly where AnyChart shines.

Lead by Anton Baranchuk, PhD in Math and a successful tech entrepreneur, AnyChart currently offers an award-winning versatile JavaScript charting library for web developers and software engineers as its primary product. This year, the company has also made it available directly to end users — data analysts and business intelligence experts — through its own dedicated extensions for Qlik Sense that have quickly become bestsellers.

Emerging Out of Challenges

The company’s story began more than 16 years ago. At that time, AnyChart’s founders saw a big opportunity in the growing adoption of Flash and XML. They understood it was possible to extract data from literally any source in the XML format and then visualize it as an interactive chart in Flash. Flash was everywhere, so AnyChart succeeded as a “one-size-fits-all” tool for interactive charting.

At the time of AnyChart’s inception, Flash and XML were still young technologies. That resulted in a lot of bug reports as well as security and related issues in Flash, causing problems that did not depend on the team. When big companies like Oracle started joining the company’s customer list, the company began to deal with a really massive flow of queries and reports from thousands of developers from all over the world. To cope with that, AnyChart had to entirely rethink and rearrange its technical support and product development activities. That optimization was one of the key elements of its success, and its current level of customer support and work with customers in general is known to be especially high.

Moving ahead, as Flash was falling down and HTML5 was growing as the modern web’s core standard, AnyChart reduced its dependency on Flash by adding the support of SVG and releasing its own JavaScript charting library as a brand new product, from scratch. Then the company completely shifted to HTML5 while still supporting its Flash components for the customers who keeps using that technology. Yet one of the biggest challenges in the life of AnyChart — that’s how the team remember that transition.

AnyChart is proud to serve more than 70% of the Fortune 1000 members and more than half of the top 1000 software vendors worldwide. Thousands of businesses around the globe use AnyChart to power their data analytics and business intelligence, from startups to the biggest corporations including but far from limited to Microsoft, Samsung, Oracle, Volkswagen, Rolex, Bosch, McDonald’s, Lockheed Martin, Reuters, Citi, and many others. The company has customers from a wide range of industries: health care, media, retail, telecom, oil, software, and so on.

Featured in numerous lists and directories as one of the best JavaScript charting libraries, AnyChart has also won multiple awards. For instance, the jury — comprising experts from Google, IBM, TIBCO, Mozilla, and other top technology companies — named AnyChart the best innovation in JavaScript Technology at last year’s DEVIES Awards within the framework of the world’s largest regular developer tech event, DeveloperWeek in California.

As a flexible JavaScript (HTML5) solution, AnyChart’s JS library allows businesses to create interactive charts of any kind out of any data. This advanced flexibility is clearly in accordance with its name ‘AnyChart.’

The library is fully independent from all platforms, browsers, databases, and technology frameworks and libraries. It supports a range of features including multiple options for working with data, including JS API, JSON, XML, CSV, HTML tables, Google Spreadsheets, data mapping, etc. When you count them, AnyChart offers over 90 different chart types, built-in algorithm support, interactivity, and custom drawing features. Other notable features include a powerful export and sharing engine, and, for example, smart localization with nearly 200 culture-specific locale settings.

AnyChart is a highly customizable data visualization tool. Graphics are rendered using GraphicsJS — it is the company’s own innovative open-source JavaScript library for drawing SVG graphics (with VML fallback in older browsers), which allows developers to modify charts in endless ways.

Although technically AnyChart is one big library, for customer and development convenience, it is marketed as a product family that consists of four JavaScript charting libraries, each optimized to serve a specific data visualization purpose:

• AnyGantt — for Gantt charts, both project and resource, and PERT charts.

• AnyMap — for maps and seat charts.

• AnyStock — for stock, financial, or any date/time charts.

This year has been particularly exciting for the company. In spring of 2019, AnyChart announced a technology partnership with Qlik, adding three extensions for Qlik Sense with a fourth on the way soon. By integrating seamlessly into the Qlik environment and bringing more than 30 chart types (and counting), AnyChart has opened up multiple new charts to the Qlik community and engaged with an entirely new set of users in addition to the previously earned customer base.

“AnyChart generates all our charts in our Health and Wellbeing Profiles. To have so many options has been brilliant! The range of charts available and the amount of customization is impressive. Also, the ability to add error bars was essential for us.” — Mark Painter, Community Intelligence Team, UK’s Devon County Council.

Already at the top position in the segment of data visualization software for business intelligence and analytics, AnyChart is aimed at further strengthening the company’s global leadership.

The team says they have ambitious plans to expand to new audiences, verticals, and territories.