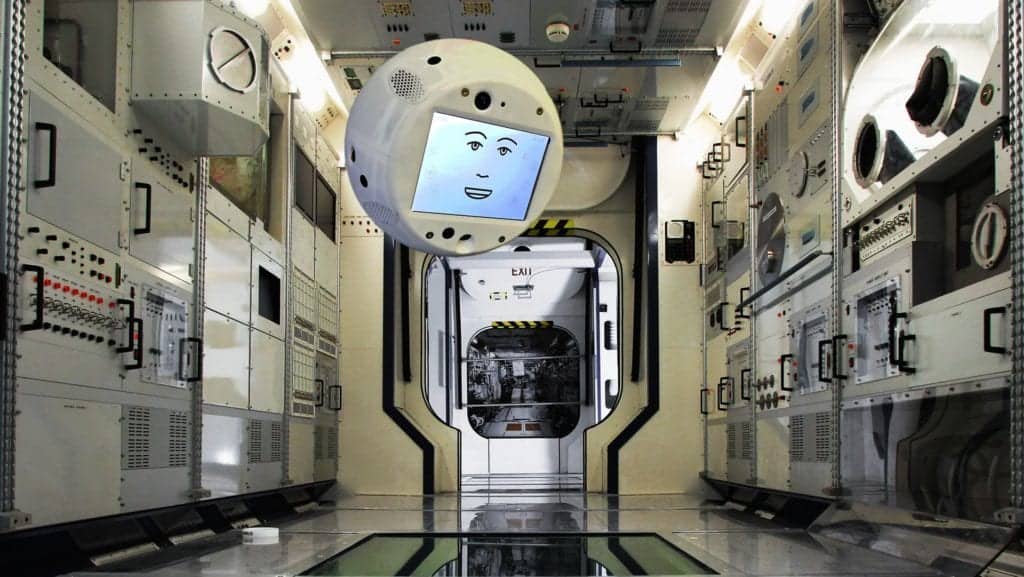 What initially started out as a self-financed study to examine the concept for an AI-based astronaut assistant, is now being developed in cooperation with IBM and commissioned by the Bonn-based DLR Space Administration. The technology demonstrator CIMON (Crew Interactive Mobile Companion), is all set to become the first AI-based mission and flight assistance system.

CIMON’s structure is entirely made of plastic and metal, created using 3D printing. Weighing around 5 kg, it’s the size of a medicine ball with a diameter of 32 centimeters and will be tested by Alexander Gerst on the International Space Station (ISS) between June and October 2018 during European Space Agency’s Horizon mission. It’ll become the new crew member on ISS as part of a technology experiment to demonstrate cooperation between humans and intelligent machines.

Since August 2016, a team of 50 members from Airbus, IBM, DLR and LMU has been working on its implementation. Built by Airbus in Friedrichshafen and Bremen on behalf of the German Aerospace Center, the interactive astronaut assistant was funded by German Federal Ministry for Economic Affairs and Energy. Trained by using voice samples and photos of Gerst and with procedures and plans of the Columbus module of the International Space Station loaded into its database, Watson AI technology from the IBM Cloud accumulates knowledge and provides voice controlled artificial intelligence.

In order to familiarize himself with his electronic counterpart, Alexander Gerst actively participated in the selection of a screen face and voice of CIMON. CIMON’s human aspects were co-developed by the scientists at Ludwig-Maximilian University Hospital in Munich. Equipped with a selected range of capabilities, CIMON on its first mission to space will be working a total of three times in collaboration with Gerst. The tasks would include an experiment with crystals, solving a Rubik’s cube and use CIMON as a flying camera to perform a particularly difficult medical experiment.

CIMON with its synthetic voice and facial and speech recognition abilities has been trained to interact with Gerst. On earth, we are used to this functionality but the same in space would have a bearing of an altogether different level. According to Airbus, “With CIMON, crew members can do more than just work through a schematic view of prescribed checklists and procedures; they can also engage with their assistant. In this way, CIMON makes work easier for the astronauts when carrying out every day routine tasks, helps to increase efficiency, facilitates mission success and improves security, as it can also serve as an early warning system for technical problems”.

The orientation, navigation and steering capabilities of CIMON was tested on 9th March 2018 during the 31st DLR parabolic flight campaign in Bordeaux, where it will enter microgravity. The experiment was conducted in order to see if CIMON is fit to be used on the ISS in permanent microgravity. Based on this, CIMON will be sent to ISS on board the US Space-X CRS-15 space transport mission.

Serving as a complex database, CIMON will have all the necessary information and fully voice controlled access to all documents and media to help the astronauts conveniently go through operating procedures and instructions during experiments or maintenance and repair. It can also be used for documentation with its mobile camera feature.

During a long term small group confinement missions (say to Moon or Mars) aboard the ISS, social interactions between the humans and intelligent machines will play a very important role in the success of these missions. CIMON has been developed with an aim to study and understand the current artificial intelligence capabilities in a complex environment like that of the ISS in order to provide the best quality support to people working in such conditions.