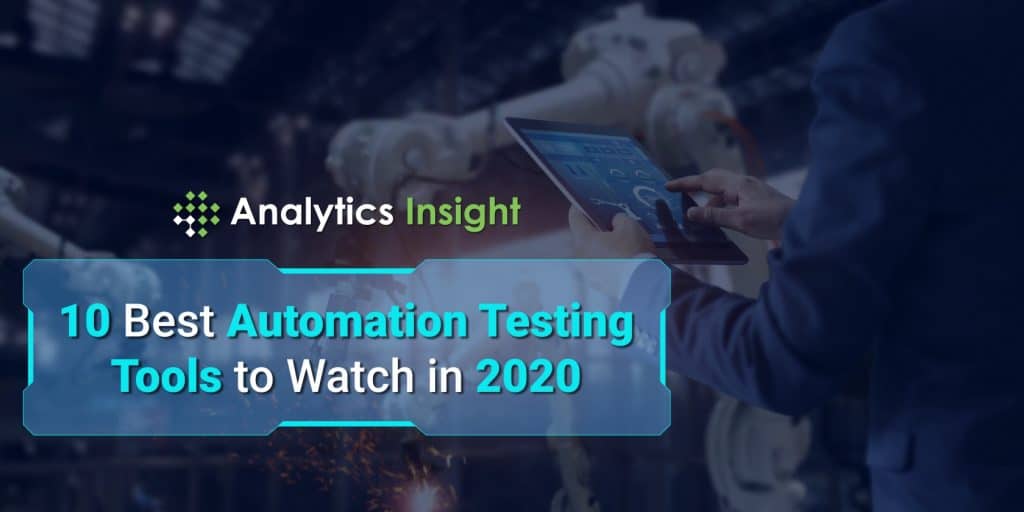 Unlike manual testing which is being done by a human sitting in front of a computer, automation testing is a software testing technique to test and compare the actual outcome with the expected outcome, all by using special automated testing tools. Also called test automation, this testing technique is an enabler of the successful adoption of Agile and DevOps systems. Leveraging the right tools for automation testing at the right time is crucial to deliver a quality product at speed. However, effective deployment of automation testing requires considerable investments of money and resources. Implemented properly, it will save the human effort and time to a great extent, with leaving no or very less scope for errors in testing.

Here we have brought together 10 best automation testing tools businesses should consider in 2020.

Selenium is one of the best testing automation tools when it comes to web application testing tools. It can be executed in multiple browsers and Operating systems and is compatible with several programming languages and automation testing frameworks. Selenium helps create complex and advanced automation scripts, in addition to the base for most of the other software testing tools and supports parallel test execution, thus lowers test execution time. Selenium WebDriver, also known as Selenium 2.0, executes test scripts through browser-specific drivers. It involves API, library, driver, and framework.

Appium, an open-source automation mobile testing tool, which is developed and supported by Sauce Labs to automate native and hybrid mobile apps. A cross-platform mobile automation tool, Appium allows the same test to be run on manifold platforms, and multiple devices can be easily tested by Appium in parallel. It also supports automation tests on the simulators (iOS) and emulators (Android) as well as physical devices (Android and iOS both). Appium is very much similar to the Selenium Webdriver testing tool.

Automation testing tool for desktop and web applications, LambdaTest allows users to perform both manual and automated cross-browser testing on a combination of over 2000 desktop and mobile browsers in the language they prefer like Python, Java, Javascript, etc. It is a cloud-based cross-browser testing platform, which enables the users to run Selenium automation tests on a scalable, secure, and reliable cloud-based Selenium grid and perform live interactive cross-browser testing of their public or locally hosted websites and web app on the cloud. Moreover, LambdaTest has single-click integration with prevalent project management and enterprise tools like Jira, Asana, Trello, Github, Gitlab, BitBucket, Slack, and Visual Studio Team Services.

Qualibrate is a 3-in-1 solution that empowers teams to create documentation, automated tests and training materials in one click. It supports Web applications running in different browser types. This easy to use interface allows users to record a Business Process in minutes. And their all steps and input data will be stored centrally on the cloud and ready-to-use for different purposes, including test automation and accelerated manual testing; business process documentation, and end-user training.

As a community-powered test automation platform, TestProject is used to create automated tests for web and mobile apps. It simplifies and enhances the use of leading open source tools Selenium and Appium. Driven by a community of passionate developers that create and share addons for Mobile, Web and API testing, TestProject also supports operating systems such as Windows, Linux, MacOS. Thanks to its simple and clean setup, users can easily start their test automation with TestProject.

Testsigma is a cloud-based automation testing tool for continuous testing in Agile and DevOps. As an AI-driven test automation tool, Testsigma uses simple English to automate even complex tests and well meets the continuous delivery needs. It also provides a test automation ecosystem with all the elements required for continuous testing and allows users to automate Web, mobile applications and API services, as well as supports thousands of device/OS/browser combos on the cloud and on users’ local machines.

It is an open-source software testing tool written in Ruby and let users write test cases that anyone can easily understand regardless of their technical knowledge. Cucumber is used to execute automated acceptance tests written in the “Gherkin” language, a domain-specific language for behavior descriptions. This test automation tool makes use of two important files: Feature file, which contains code written in Gherkin and Step definition file, which involves the actual code written by developers. Many organizations prefer integrating Cucumber with Selenium as it makes it easier to read and understand the flow of applications among the members from different teams.

Designed by Hewlett Packard Enterprise (HPE), the Unified Functional Testing platform provides developers and testers with tools for application test automation. It can automate Web, Desktop, SAP, Java, Oracle, Mobile, and Visual Basic, amongst other applications. This automation testing tool also allows users to create and execute automated functionality and performance tests on native and cross-platform mobile apps developed for Android, iOS and Windows devices; on web applications that deploy on today’s most popular browsers; and on desktop apps for Windows-based machines.

pCloudy is a Continuous testing platform that helps to speed up the app testing by enabling end to end continuous testing for enterprises. It is also equipped with an independent browser cloud platform where you can test multiple desktop and website applications simultaneously.  With more than 5000 device browser combinations and infra to scale, it helps enterprise achieve quality at speed.From functional to automation to bot tests can be performed seamlessly on this platform. It offers public, private and on premise cloud offerings to its customers.

How Digital Transformation is Minimizing the Data Risk

How to Use Data Analytics to Create More Effective Content

Capitalizing on UAV Drone Technology for the Future of Urban Planning