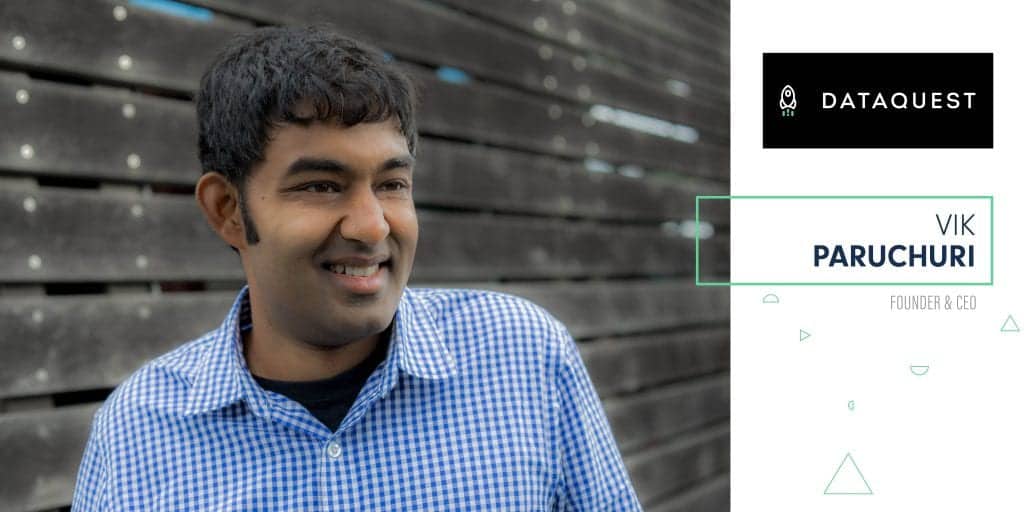 With accelerating demand for well-qualified and skilled data science talents, it has become compulsory to remove borders and barriers of social and physical presence at learning centers. The platforms like Dataquest enable learners to master the required skills to excel in their respective industry. The quality education provided at learners’ choice of time and place eliminates a substantial amount of time, energy and money consumption which can be channelized in beneficial ways later. Dataquest.io is an online data science education platform with a mission is to help everyone who wants to learn data science, regardless of their background or their prior experience.

The platform teaches Python, R, SQL, machine learning, and a variety of other data science and programming skills using an interactive, browser-based coding environment that lets students quickly apply what they’re learning by writing their own code. All of Dataquest courses are taught using real-world data and end by asking students to synthesize what students have learned by building a real-world data science project.

A Snippet of Curriculum and Pedagogy

Dataquest’s philosophy is that students learn best when they can quickly apply what they’ve learned by writing code and getting immediate feedback, rather than having to sit through long videos and then struggle to apply what they saw in the video on their own time. The platform teaches in bite-sized chunks and asks the student to apply their learning by writing code before proceeding to the next screen. Students’ code is checked automatically by Dataquest’s system so that they get immediate feedback on whether they’ve grasped the concept they just learned.

Dataquest also focuses heavily on training students for the real-world. That’s one reason it teaches with text instead of videos (real-world data scientists often have to read library and API documentation, which is in written form), and it’s one reason Dataquest uses real-world data, even in its introductory courses.

Additionally, the courses are organized into careful “paths” where each course builds upon the last one. A student with zero programming or data science experience could start Dataquest’s Data Analyst or Data Scientist paths and go from zero knowledge to being a qualified job candidate just by working through the courses on Dataquest platform in sequence.

Standing Out with Learner-Centric Offerings

Dataquest distinguishes itself among other similar data science education platforms. First, it is far more affordable than most option for learning data science. A recent survey it conducted of over 700 long-term students found that they saw a mean salary increase of over US$16,000 after Dataquest vs. their salary before. Given Dataquest’s total long-term student count, it estimates the platform has helped students earn over $100 million in salary gains after studying with it. The platform costs just $399 per year for full access — compare that to the average bootcamp cost of more than $11,000 just for a couple of months! Based on the number of long-term students who say they used Dataquest as their main or only learning resource for data science, the platform estimates it has helped students save at least $60 million in tuition fees.

The Dataquest team also thinks its style of teaching, which breaks big concepts down into bite-size lessons and asks students to apply their knowledge by writing real code each step of the way is more effective than any other learning system. Studies have repeatedly shown that students who get hands-on with a topic they’re studying tend to perform better than those who don’t apply what they’ve learned. On the Dataquest platform, even a student who’s never written code in their lives will be running their first program in under five minutes.

Dataquest’s whole system is designed to ensure that students are continually thinking about and truly applying what they teach. Students of Dataquest who’ve tried other, similar platforms frequently tell us that Dataquest is their favorite because it actually forces them to think about and apply what they’ve learned.

The students work with real-world datasets immediately, from the first course and throughout every course on Dataquest platform. Courses also end with real-world projects that are more open-ended, and it encourages students to put time into these and use them as portfolio projects for job applications. Over the course of studying on Dataquest, students will work with real datasets to complete a wide variety of data science tasks, including data cleaning, analysis, machine learning, deep learning, data visualization and storytelling, and much more.

The Dataquest team thinks it is helping to democratize the industry and empowering people all over the world by making these skills accessible to more people, not just to those with the money and time to commit to a bootcamp or a university program. And the platform is making it easier than ever for anyone to learn data science, with a start-from-scratch curriculum and explanations that are easy to understand even without a background in math or computer science.

The only recognition that really matters to Dataquest is what its students say. The platform has five-star review averages on third-party review platforms like Switchup, G2 Crowd, and Course Report. In its recent survey of long-term students, 96% of them say they’d recommend Dataquest, and they reported mean salary gains of over US$16,000 after studying with Dataquest. Those are the kinds of achievements that matter to Dataquest.

Vik Paruchuri, the Founder and CEO of Dataquest believes that data science is increasingly what differentiates high performing companies, like Google, from companies that aren’t growing. Data science skills will be in increasing demand, but the titles may shift to reflect the fact that data science is more broadly useful in organizations. Titles will become more specialized and department-specific.