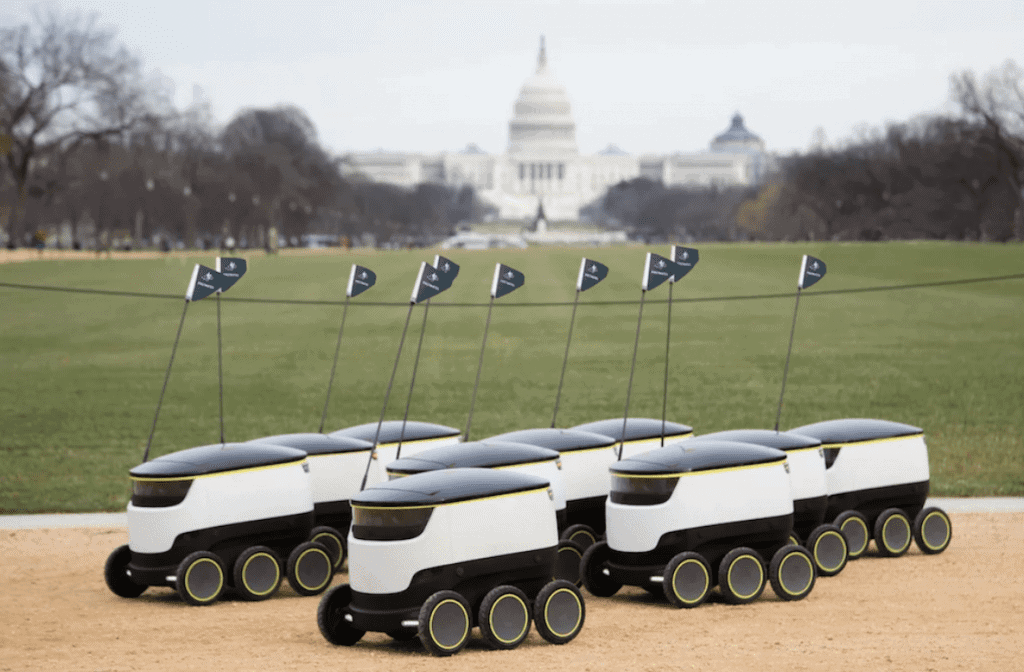 The growing adoption of Artificial Intelligence, Robotics and Automation makes the delivery service easier and convenient. In the recent years, the world sees a wave in robotics and drone delivery as companies, from e-commerce to tech sector, all are entering into automation in order to provide comfortable services to their customers, and making it possible through autonomous delivery robots such as Ford’s Digit, a two-legged robot and Amazon’s Scout, a six-wheeled robot.

Now the robotics enter the food delivery environment, which is expected to deliver foods at customers’ doorstep sooner. In Mid-September 2019, students at Purdue University seen little food delivery robots – owned by Starship Technologies – making their way across campus, down sidewalks, and across streets.

Food delivery robots may assist companies to cut costs, but it also relies on a few other factors. The robots store huge amounts of sensitive data, including maps of building interiors that help them navigate places. They could also be equipped with lasers or computer vision. Let’s look at how robots and drones are changing the way people get food delivered at their doorstep.

In the late last year, Milton Keynes saw the first robot delivery service as Starship Technologies, a robotics company, launched the world’s first robot package delivery service in the region. This small, 6-wheeled robot delivers groceries, parcels, and takeaways to people living there. The company has already tested its robots for food delivery on the streets of London and has released them on the campuses of several companies in California to deliver lunches. The company selected Milton Keynes for the launch as its testbed due to the high-tech road and pavement infrastructure, which is making it robot friendly. The robots are able to autonomously navigate road crossings and zebra crossings using GPS, cameras, and radar to detect traffic.

In June this year, Wing – an Alphabet-owned company, tested a drone delivery service to residents in Finland’s capital city, Helsinki. During the test, the drone carried meatballs for two and fresh Finnish pastries, along with snacks and other meals, according to the company. The technology used in drones allows them to fly safely and avoid trees and houses on its route. The company has already tested the same drones in Canberra, Australia, where it was able to deliver ice cream, doughnuts, coffees, and other food to people in the city. After receiving the approval to use drones for package delivery by the Federal Aviation Administration (FAA) in late April, Wing will also make drone deliveries in areas of southwest Virginia.

Recently, companies in Japan and China have rolled out their trials for indoor food delivery robots. In this regard, China’s major food delivery company, Meituan Dianping, is testing its unmanned robots in nearly 10 offices and hotels in large Chinese cities like Beijing and Shenzhen.

On the other hand, Japan could also see food delivery robots on its streets as a Tokyo-based robot manufacturer ZMP developed and tested a food delivery robot in universities and apartment complexes. These robots can navigate environments like office buildings, apartments and universities to autonomously bring food to customers through lift or stairs.

Cyber Security For Web Hosting: Something Basic, Something Dangerous

How Data Science and Machine Learning are Reshaping Global Industries

The Importance of Edge Machine Learning