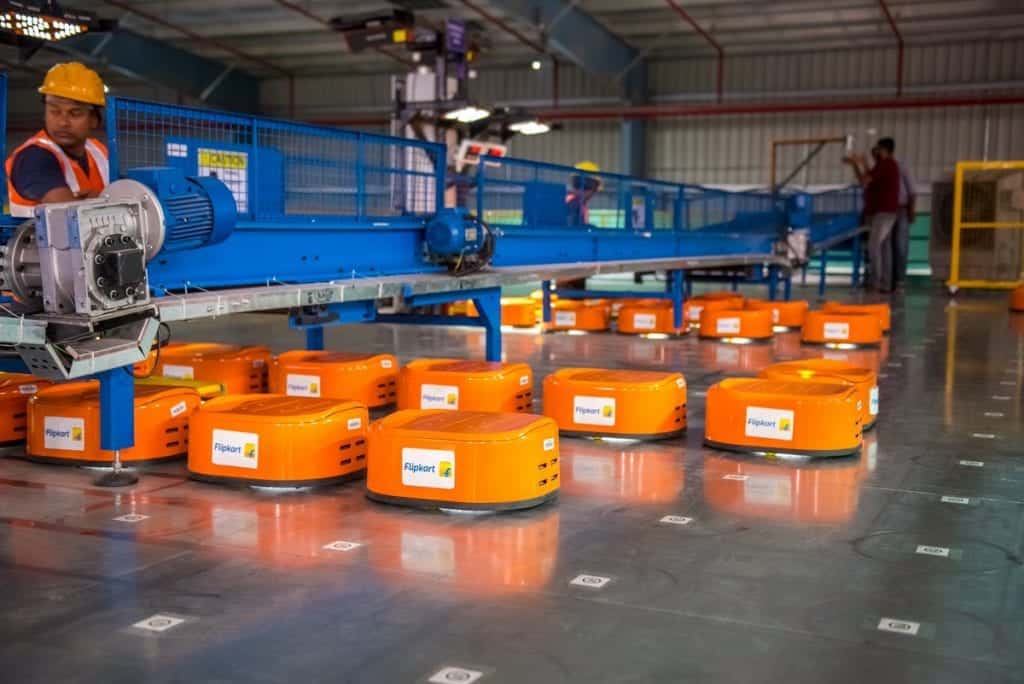 In the race of pre-Diwali festive season sale, especially against Amazon, India’s biggest e-commerce, and Walmart-owned company Flipkart bets on robots and plans to quadruples its number to ship more products during its Big Billion Day (BBD) sale. The company is adding 340 small orange cuboids like robots to its existing fleet of 110, and they call them bots or automated guided vehicles (AGVs), which move inside a fenced area bereft of humans.

These robots will carry everything with them, from books to electronics to mobile phones. On this take, Pranav Saxena, Head of Robotics at Flipkart says they are ramping it up to three to four times. Flipkart’s Big Billion Day sale is an annual shopping festival which is typically held in October, around the same time as Amazon’s Great Indian Festival sale.

During the last BBD sale, the company’s gross merchandise – GMV, the total value of goods sold without taking discounts into account – grew by 90 percent compared to 2017. That time, it added $1 billion in total GMV and millions of new customers. So, taking these rising trends into context, the company wants to repeat this year’s BBD sale to succeed, as well. And that scale will require robotics combined with human effort.

Robots in e-commerce warehouses are no clandestine. The e-commerce giant Amazon already introduced robots in its warehouses 5-year back in 2014, and they perform a lot more jobs, from sorting to stacking and picking, than the Flipkart bots. The company has employed over one lakh robots, mostly in the US. These large number of Amazon’s robots is developed by Kiva Systems, a company that the company acquired for US$775 million and rebranded it as Amazon Robotics. However, Amazon’s robots haven’t yet come to India.

In India, collaborative robots (cobots) are on the rise as automating jobs are repetitive, tedious and human-intensive. Globally, the number of these cobots – do not require high levels of robotics understanding and are fairly easy to work along with – is growing at 60-70 percent. The movement of these cobots, similarly to an automated traffic management system, is managed by a machine learning algorithm.

As part of the addition of more robots to Flipkart’s existing bots, the company officials said that the first 100 bots that were deployed enhanced their efficiency with 60 percent by processing 4,500 shipments every hour. With 450 bots, they expect, a lot more can be achieved. The efficiency can be scaled over five times with incremental tweaks. The bots can do all this without taking a tea break, 24 hours a day, for the whole year, officials added.

Currently, Flipkart is at the cusp of machine learning-driven warehouse automation that will empower its millions of shipments. The company’s BBD sale this year will focus largely on core product categories, such as smartphones, electronics and its top-selling brands across multiple segments.

The Ever-Increasing Adoption of Cloud

How Will Evolution of Data Science Jobs Look Like in Future?

The 10 Most Promising System Integrator Companies for 2020