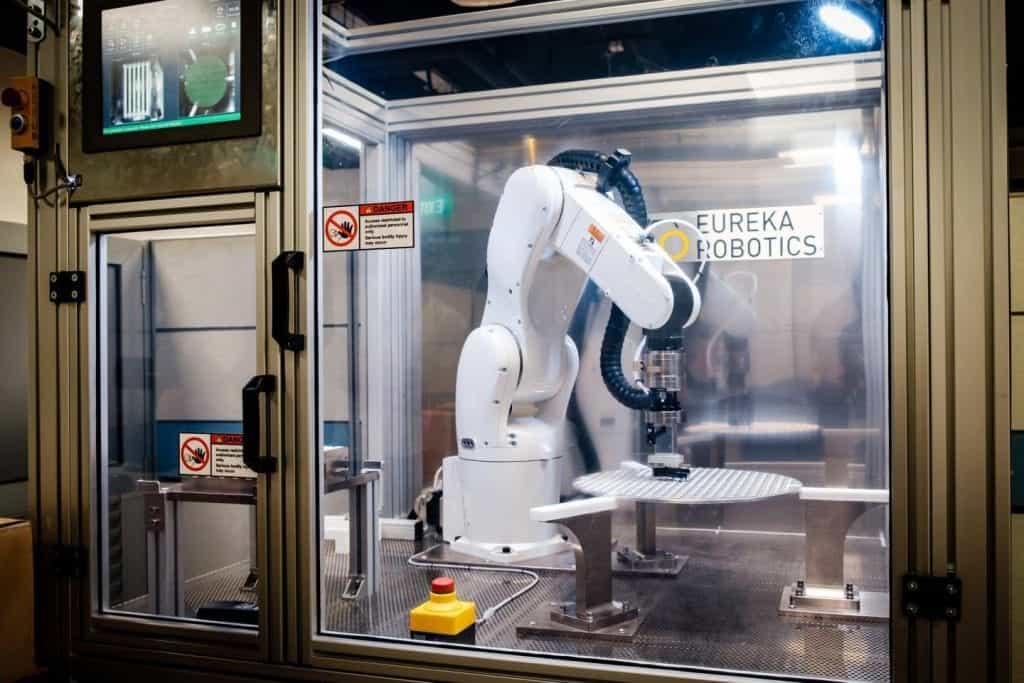 Eureka Robotics, a spin-off company from Nanyang Technological University (NTU), Singapore, introduced a new robot that can hold delicate optical lenses and mirrors with care and precision, just like a human hand. The robot, named Archimedes, is a six-axis robotic arm, which is capable of slotting lenses and mirrors of multiple sizes into a custom loading tray to get them ready for coating.

The robotic arm can assist in eliminating defects in production and improves productivity. And it will be a boon to the manufacturers for optical products like cameras, medical imaging, and eyewear.

The 6-axis robot arm is controlled by algorithms that leverage Artificial Intelligence in order to plan its motion and how much force to exert in its grip to create a system that can mimic the ability of human fingers and the visual acuity of human eyes. Archimedes is built by the same NTU team who developed “IKEA Bot” last year which garnered lots of international buzzes when it assembled an IKEA chair autonomously in less than 9 minutes.

The Eureka Robotics founder and NTU Associate Professor Pham Quang Cuong said “With Archimedes, we have taken accuracy to the tens-of-micron level. Its accuracy of placing objects is within a tenth of a millimetre, yet it does so with the gentleness of human touch, made possible by our control algorithms.”

Archimedes is different from other robots currently utilized in the industry, which have either high accuracy but low agility where robots perform the same movements repeatedly, or low accuracy but high agility, such as robots handling packages of different sizes in logistics, the company said. This 6-axis armed robot is among the first robots with High Accuracy – High Agility (HA-HA) to be deployed on the manufacturing floor.

The NTU team already demonstrated the HA-HA concept in the “IKEA Bot” that assembled an IKEA Stefan chair in 8 minutes and 55 seconds. It encompassed a 3D camera and two robotic arms equipped with grippers that could be able to pick up tiny objects such as a wooden peg and slot them into holes with sub-millimetre precision.

As the Archimedes takes a few hours to slot delicate optics into a designated tray just like a human operator, it also frees operators to focus on higher-level tasks after taking three minutes to start the robot on its job.

“Archimedes does laborious and repetitive tasks, so humans can be freed up to do more creative and meaningful work. Companies can then improve productivity, efficiency, work safety, manufacturing outputs while optimising labour,” Pham added.

Cyber Security Approach Should Not Be Fear-Driven, Says NCSC Chief

How NLP Helps Businesses Gain Traction and Harness Their Potential?

Customer Journey Mapping: Benefits and Impact of Analytics and AI